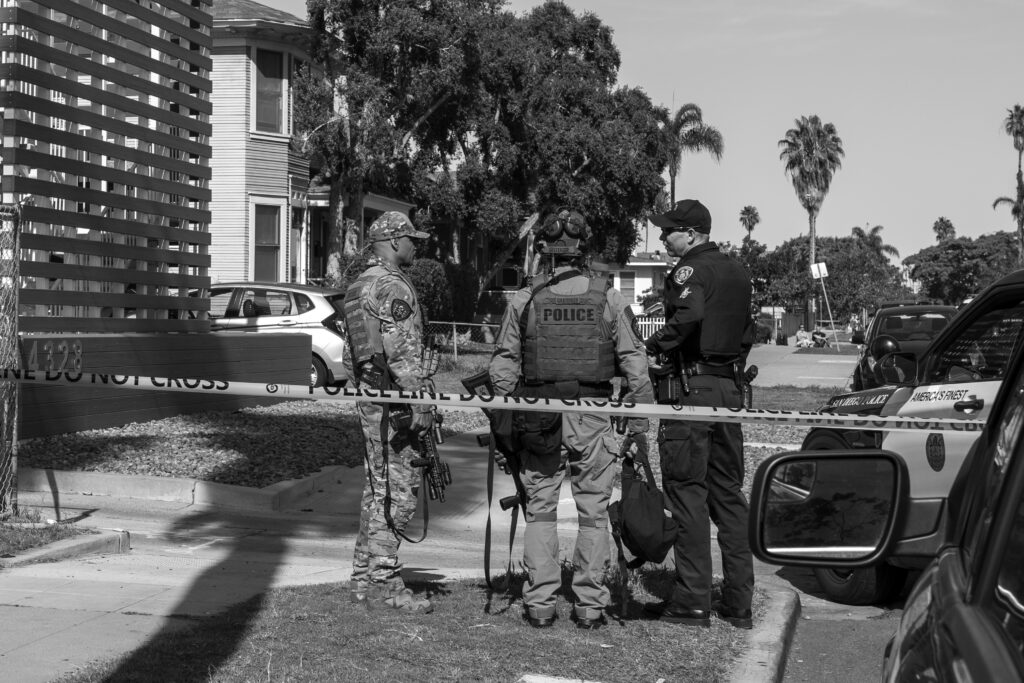 A few hours ago, while my wife shopped at Aldi, a helicopter started circling above the area where were two drug deaths last week. I could hear commands from a loudspeaker instructing someone to put down the gun and come outside. That couldn’t be good.

After she returned, Annie and I walked over to that part of the neighborhood, where we met massive police presence. Louisiana was blocked at Meade along with the perpendicular alleys parallel to El Cajon Blvd; at Mississippi and Texas.

Here is what I know: We spoke to a woman who lives in the house—and she was fraking freaking out. (She had discovered, and reported, the non-responsive roommates on Nov. 10, 2022.) She explained that another roommate texted “Help!” That three men with guns had burst into the home. I believe she said, including one of the two overdose survivors.

Standing nearby was another woman, whom I also spoke to briefly. She doesn’t live in the residence, but her brother was barricaded inside the home. 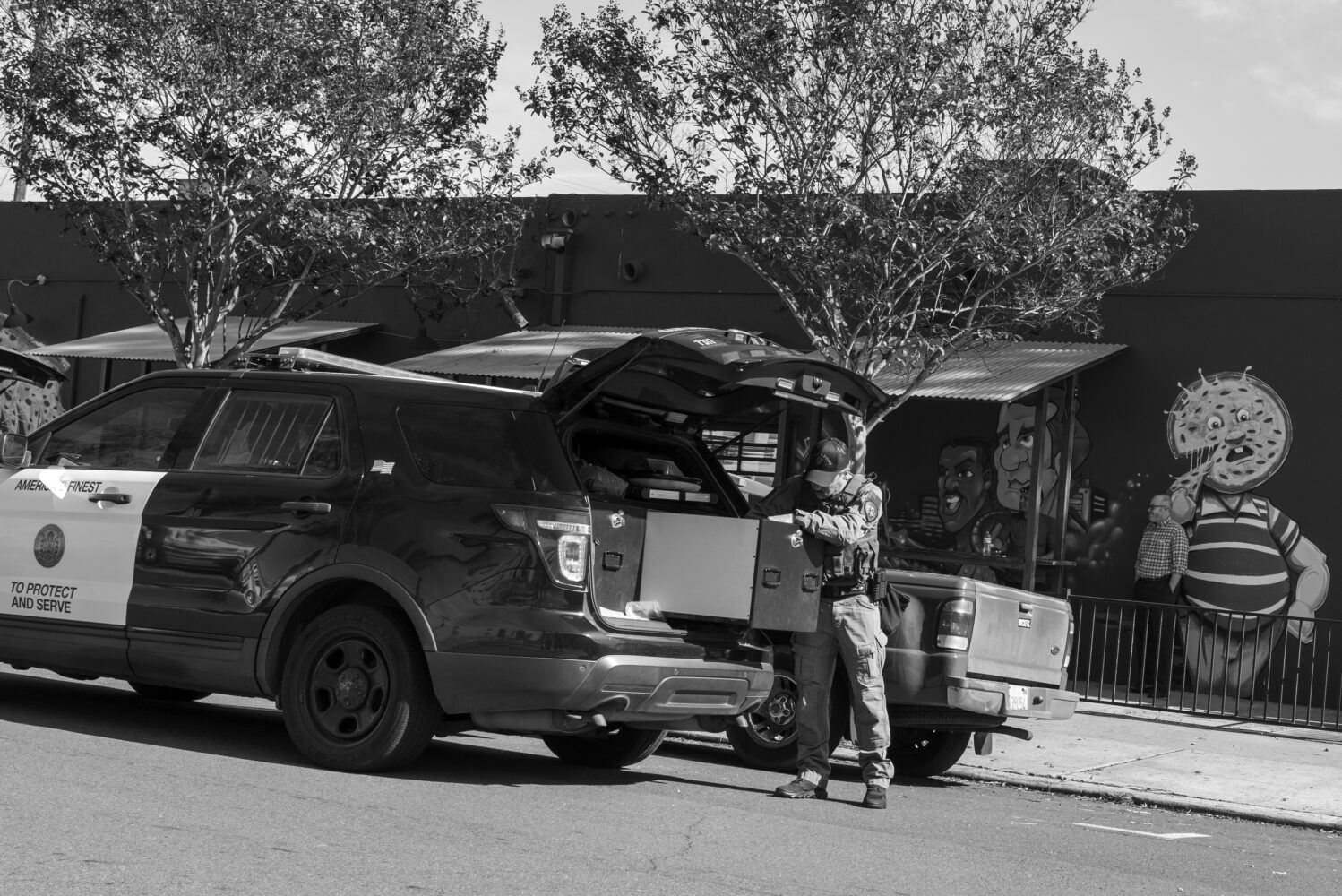 I don’t know if there was anyone else inside or if it was a hostage situation—other, perhaps, than two dogs and Conrad, who was profiled in my “Cats of University Heights” series. Before the first woman and I talked, a police officer brought over one dog on a leash. Circumstance unknown. 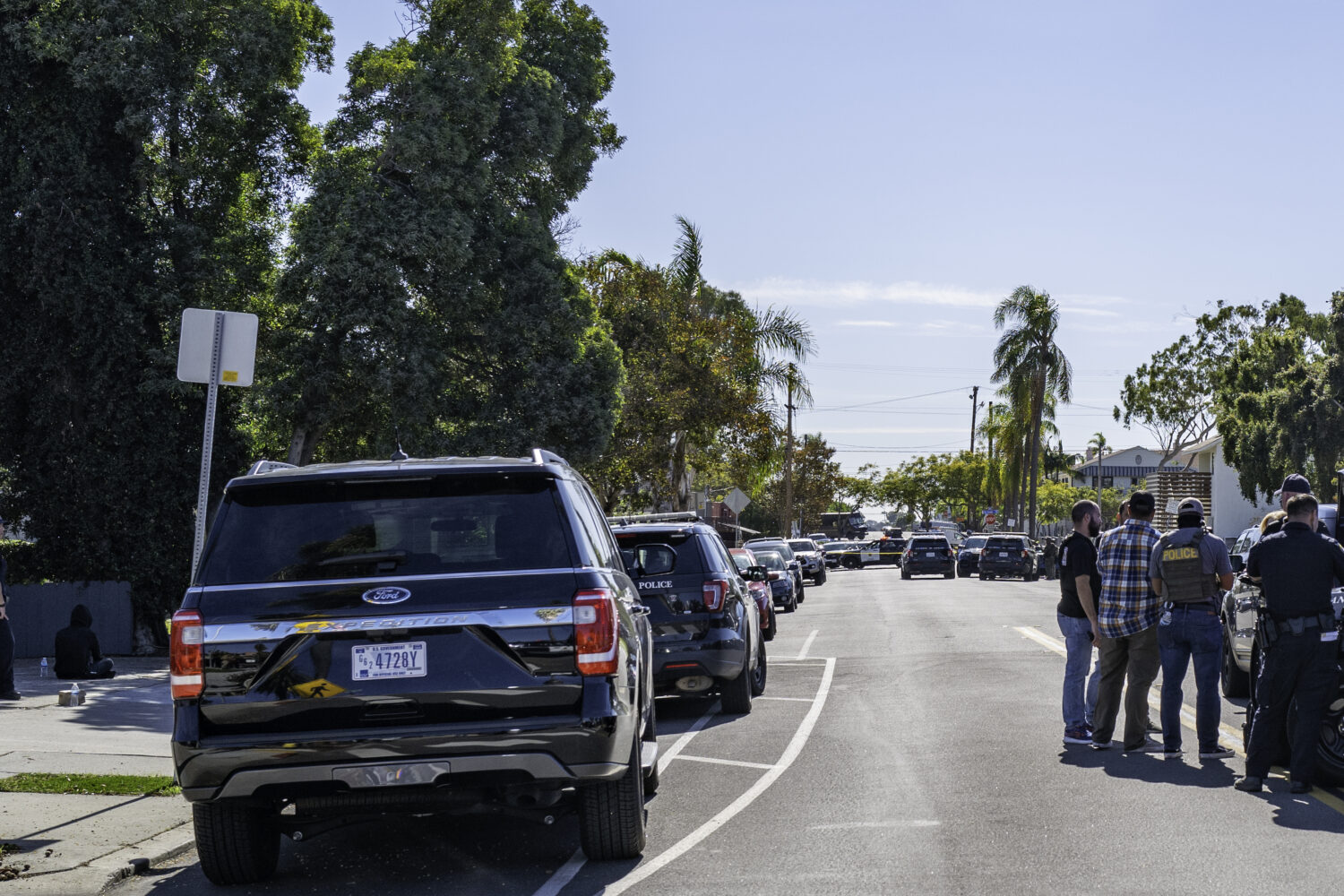 As Annie and I tried to be calming and encouraging, she fidgeted and expressed genuine panic about returning to live in the house and, in some ways, even more about finding another place to live. Rents are outrageously high now in San Diego, which is a big change from before SARS-CoV-2(severe acute respiratory syndrome Coronavirus 2)/COVID-19 lockdowns. 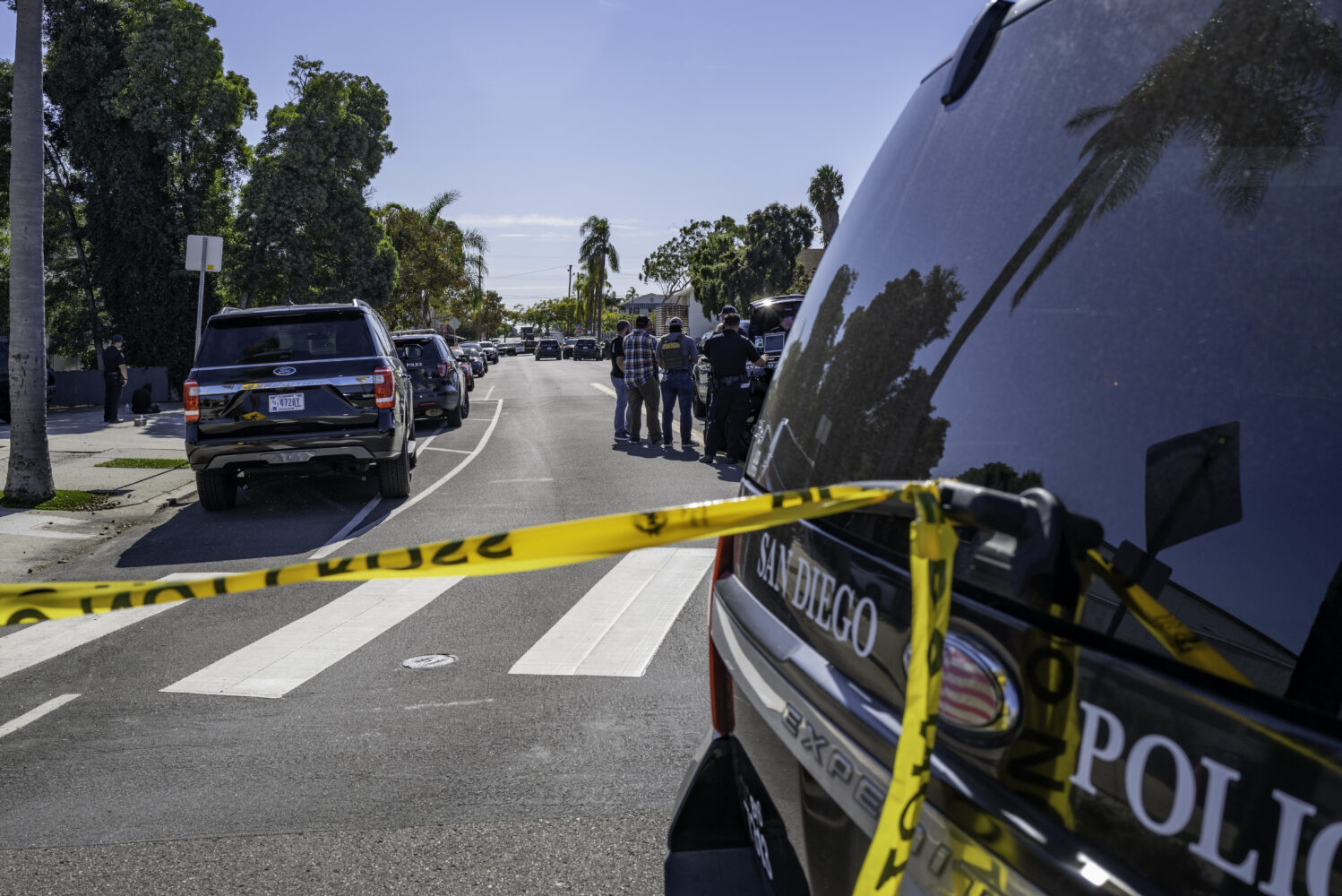 Let’s discuss the photos—black and whites taken with Leica Q2 Monochrom and the colors with Leica Q2. The Featured Image speaks for itself. Police presence was seriously tactical. Vitals, aperture manually set for all: f/5.6, ISO 200, 1/1000 sec, 28mm; 10:59 a.m. PST. 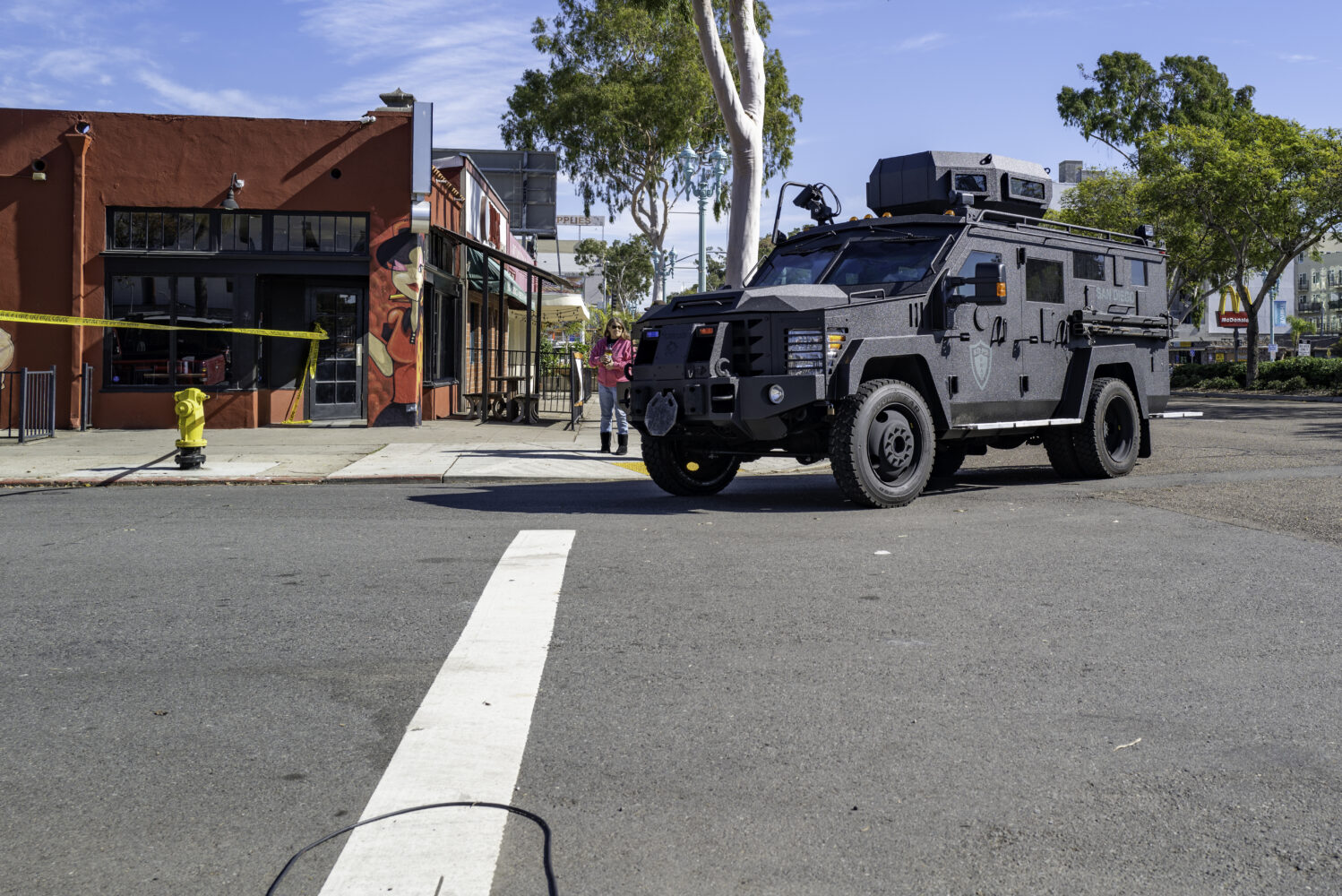 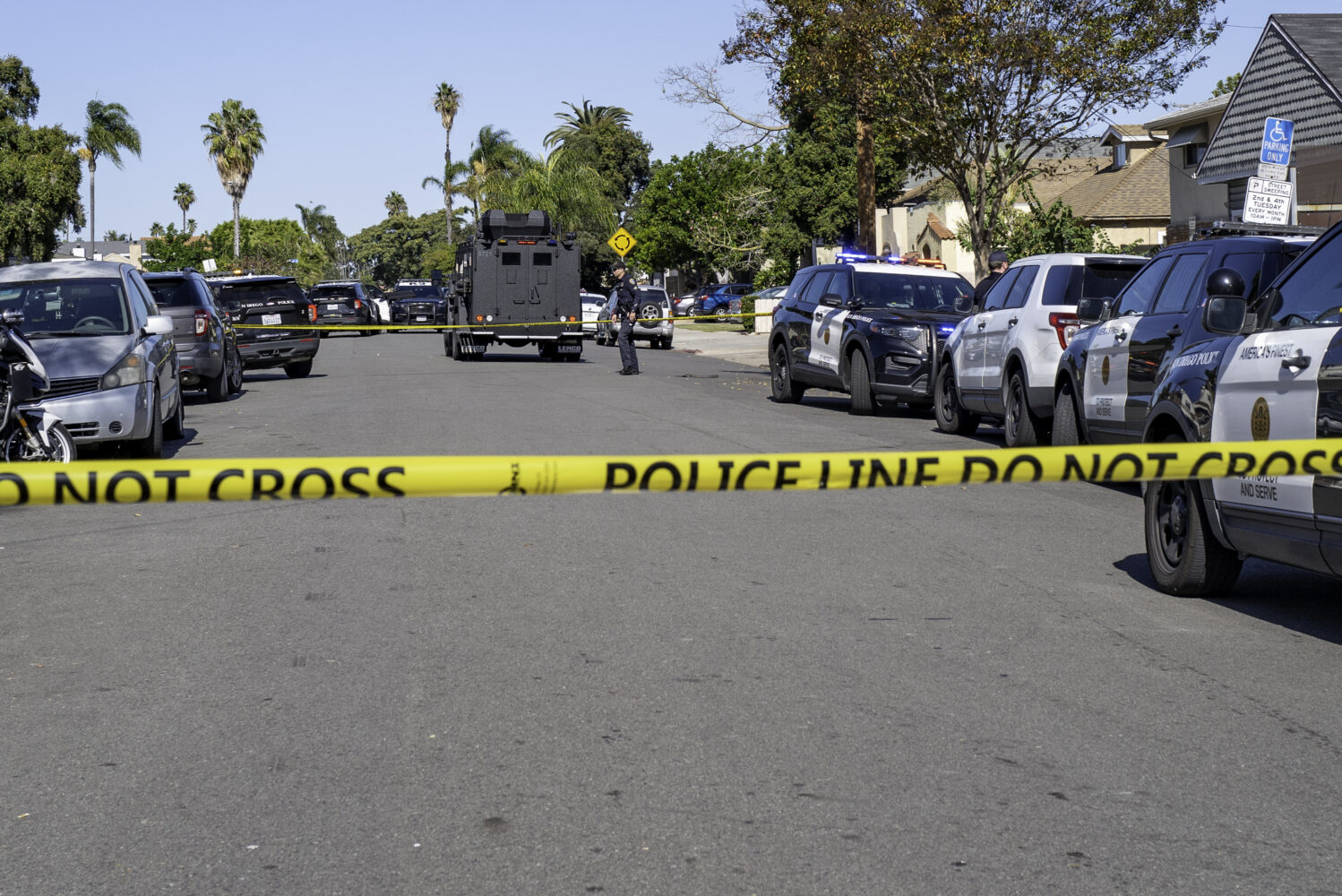 The next two shots take us back to the opposite end of Louisiana. Previously, yellow tape set the barrier at the alley parallel to El Cajon. But police had moved it to The Boulevard, from which the BearCat turns at 11:52 a.m. Vitals: f/5.6, ISO 100, 1/320 sec, 28mm. The other looks down to the house outside which the armored vehicle has arrived. Vitals are same but 1/640sec and one-minute later. 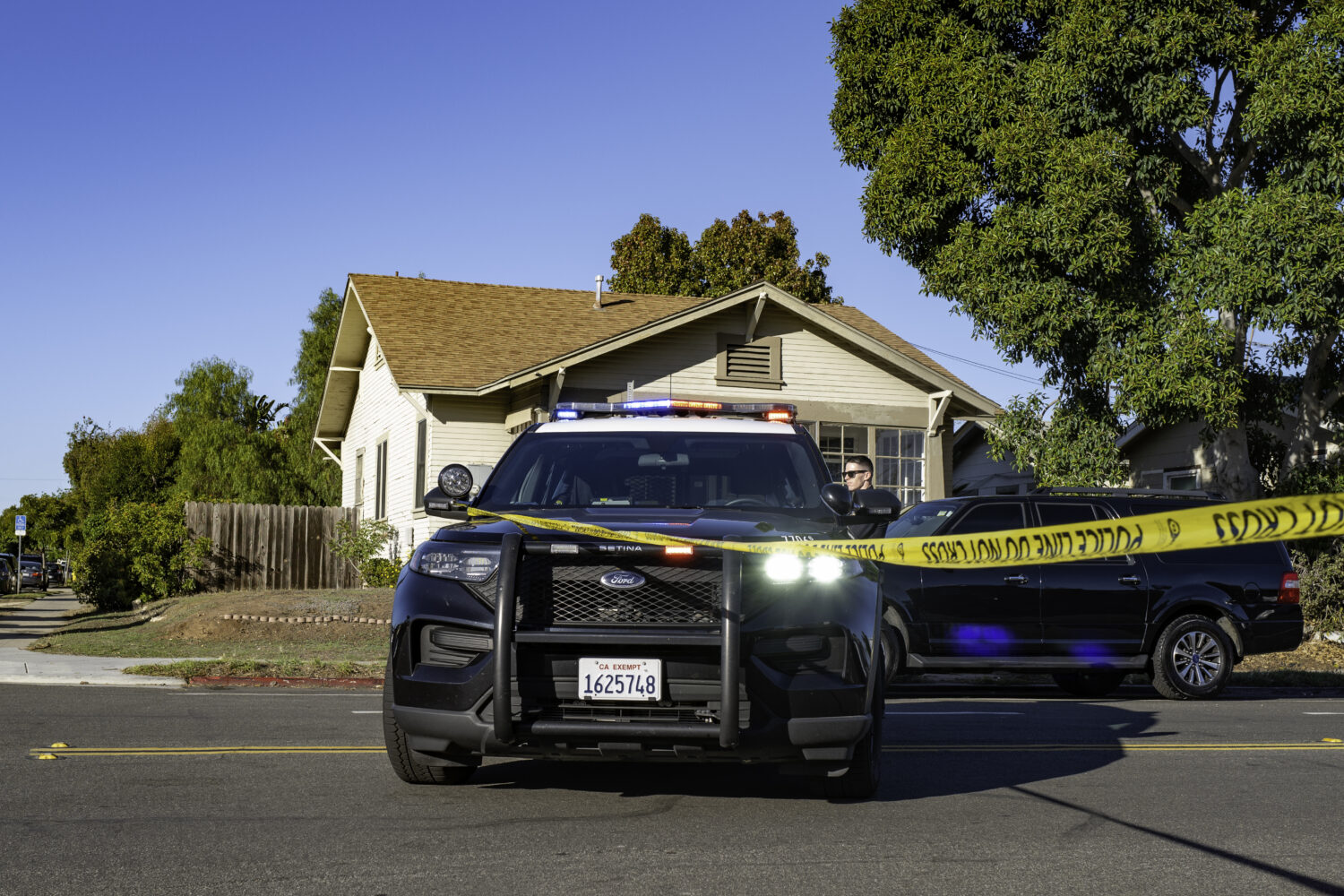 Addendum: Annie and I walked towards the crisis zone around 2:20 p.m. to see if the situation had resolved. Instead, we arrived as an officer expanded the perimeter another block West along Meade to Mississippi; same situation at Texas. I returned at 3:01 p.m. for another photo. Vitals: f/5.6, ISO 100, 1/320 sec, 28mm. 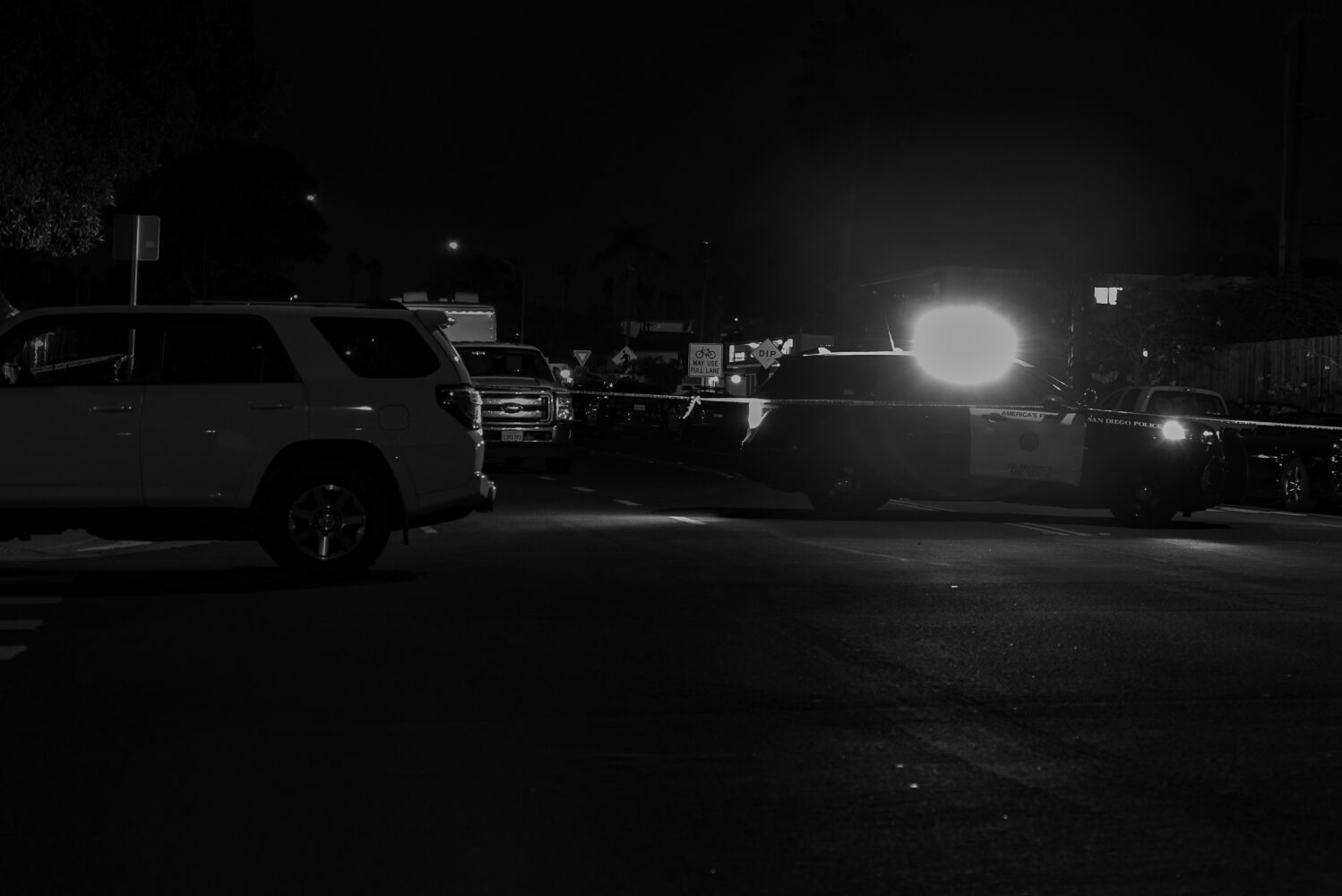 Addendum, second: This evening, I walked East on Meade to see if there were any new developments. Street remains blocked at Mississippi. I chose sharing an additional black and white—from Leica Q2 Mono, obviously—because it captures better ambience. Vehicles are packed onto the street, and parked on the crosswalk. I should explain that the cops appear to be ready for the long haul, if the several toilet trailers indicates anything. Vitals: f/1.7, 1/30 sec, ISO 2000, 28mm; 7:41 p.m.

I spoke with one of my newer neighbors (San Francisco transplant, eight months ago), who lives closer to the crime scene. He heard and also saw activity at the residence where the gunman is hiding. There were Flash-Bangs set off around 1:30 p.m. and a tear gas barrage around 4:15 p.m., he reports—adding that all the house’s windows are blown out now.

Addendum, third: I walked by the property the next morning and could see no evidence of busted windows.