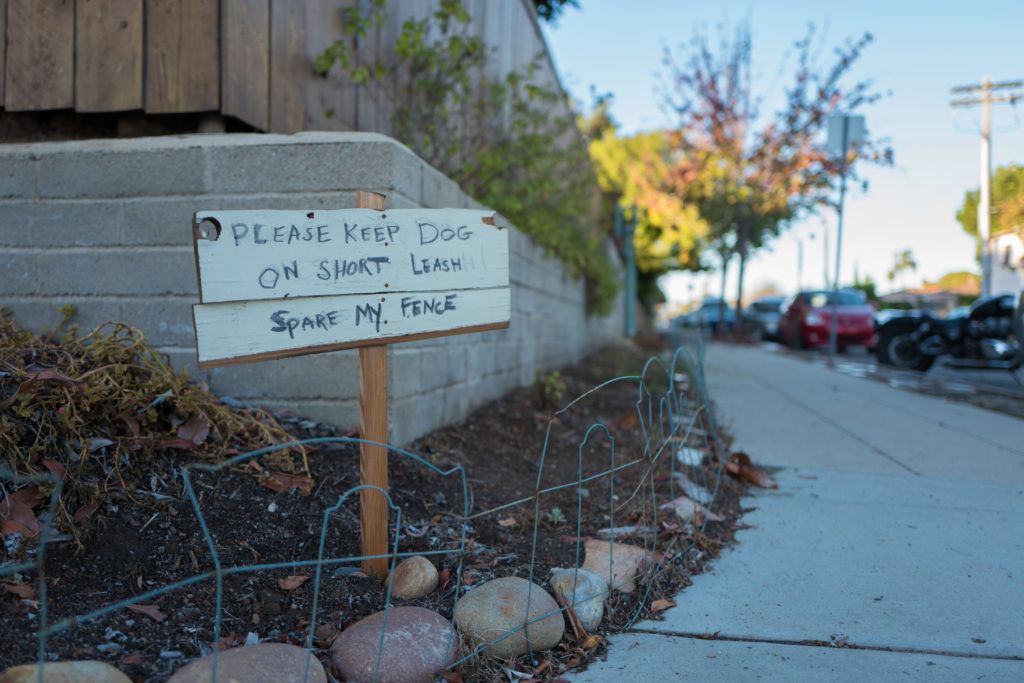 I spent the day cooped up, with windows shut, consoling our unsettled cats and waiting for the plumber to arrive. Normally, there is fresh air flowing, but we wisely chose to keep out jackhammering noise and airborne debris coming from the street, which is being dug up to put in new water pipes.

The plumber and construction crews completed their tasks within minutes of one another, freeing me to take a later-day long walk. Trudging up Meade Ave. from Alabama Street, I finally stopped and used Leica Q to make a portrait of a sign seen many times. Vitals for the Featured Image, aperture manually set (for bokeh): f/2, ISO 100, 1/500 sec, 28mm; 4:07 p.m. PST. In editing with Adobe Photoshop Classic CC, I tweaked exposure, slightly boosted vibrancy, and aggressively drew out highlights.

While crouched low with the camera, a bicyclist flashed my periphery peddling up the steep hill. Standing up, I heard, before I saw, the rider and bike crashing onto the asphalt. As I rushed by, I asked (several times) if he was okay. Did he need any assistance. Can’t say whether from being dazed or because of earphones drowning outside noise that he didn’t respond until the third or fourth time from me; even longer from a concerned driver going the other direction. By appearance and accent, I’d guess the passerby was Indian or Pakistani.

Finally, the rider pulled away an earphone and said that he was okay. He twisted something; knee or ankle, and I don’t recall which. The concerned driver had U-turned his SUV, drawing away my attention. Cause of the crash was obvious from what lay in the road, and the rider confirmed before I could ask: “Chain broke”. Yes, and on his fancy fixed-gear Surly.

I would have helped, but the biker was proud, and maybe even embarrassed. Meade Ave. is a steep hill for a fixie but a great challenge to surmount. As I continued up the hill, he pushed his broken bike down towards Florida Street. Did he limp, or was I imagining one?

Still on Meade, but across Park Blvd., walking towards North Ave., I saw Veruca cozied up on her porch. My “Cats of University Heights” series featured her in March 2017. I turned down Maryland Ave. towards Monroe. For months, I have been looking for Paula, a woman whom my wife and I met outside her home last year. The aged lady told some great anecdotes, which I wrote up but haven’t published; need an accompanying portrait, and it was too dark the night we met to take one. Sigh, once again, I didn’t find her.

Turning down Monroe towards Cleveland, I see could the kitchen window of our old apartment, which appears to be occupied. The management company took about two months to find new renters, which surprises me. We moved to our new place, in late October 2017.

At Campus and Monroe., the kitty I nickname Twilight cowered camouflaged in a wooden structure. If I hadn’t been looking, I would have missed him. He appeared in the series the same month as Veruca, coincidentally.

The rest of the walk was uneventful, although I did stop and chat with a woman who runs a preschool. I expressed concern that noise from the piping project would bother the kids. She made an arrangement for work to stop at 3 p.m., so the kids could go out play.