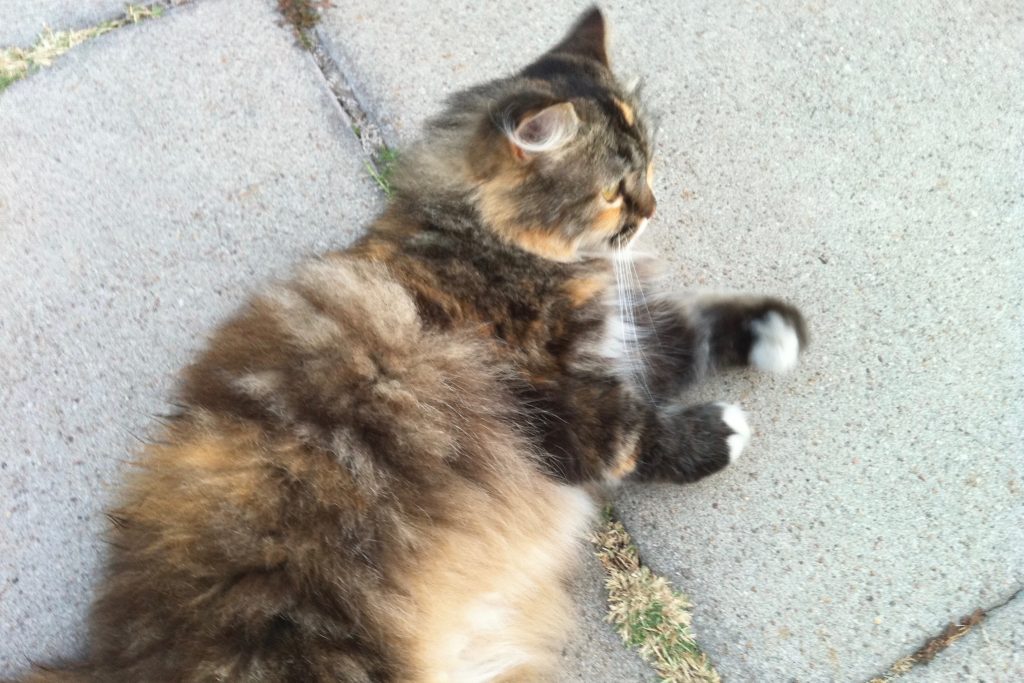 I no longer look for Kuma, our Maine Coon mix who disappeared on this day in 2012. About four months ago, my wife and I moved from our residence of 10 years to a new apartment six blocks away. There is now no home to which Kuma could return; since I less-frequently walk that part of the neighborhood, the nostalgia is gone, too. Looking was more about sentiment, moving along the streets he did; little more, as we were convinced that a coyote took away our kitty.

Untold backstory: During early summer 2010, Anne and I started to ponder the benefits of adding a cat to the household, if for no other reason than our daughter. We were prompted by a friendly, sweet, long-hair calico, who would come out from her yard to greet us whenever we walked by, on Cleveland Ave., second house back from Monroe going towards Meade on the American Market side. The ball of fluff would roll about the sidewalk, purring. A pet like her would be wonderful, we agreed. Anne recalls her name as being either Priscilla or Penelope. I think the first is right.

The Featured Image is one of only two I have of Priscilla; the photo possessed is better than none. The other is even less appealing than this motion-blurred portrait, from July 24, 2010 at 7:49 p.m. PDT. Interestingly, the metadata identifies device but not model. My guess is iPhone 4. Vitals: f/2.4, ISO 80, 1/15 sec, 3.85mm.

About six weeks later, in early September 2010, our daughter called from a friend’s house about adopting a kitten that she claimed had taken a liking to her. Had Anne and I not been softened up by our frequent Priscilla visits—and as a result discussed getting a cat—we likely would have told Molly no. Hours later, she brought home one of the cutest kittens that I had ever seen. She chose his name from the Japanese, meaning bear.

His fate could have been different. Kuma and his littermates had been cruelly abandoned. Some unknown person tossed a bag of kittens over a fence on a blistering October day—32 degrees Celsius, in La Mesa, Calif. The homeowner heard their mews while mowing the lawn and brought them inside to cool safety. Returning to his chore, and moving to the front yard, he discovered a stray that had left the others. Kuma. The kittens’ rescuer lived next door to one of my daughter’s friends.

While friendly, Kuma was a bit feral; starting in March 2011, he spent supervised time outdoors, getting more independence until the fateful morning 10 months later when he slipped under the back gate and never returned.

Not long later, Priscilla’s caretakers were compelled to move (like us they were renters, and the homeowners decided to live on the property). I would learn when talking to the married couple that their kitty vanished in January 2011. They still had Priscilla’s sister, who Anne and I had never seen, being more skittish than friendly.

Priscilla had continued to provide us joy, even after Kuma joined the Wilcox household. I did notice her absence but just assumed that we missed one another or our pet’s smell kept her away.

In the weeks following Kuma’s disappearance I discovered  that January to March is coyote breeding season and that the predators are more likely to come out of the canyons searching for food—like cats and small dogs. The day before our Maine Coon disappeared, a neighbor saw two coyotes strutting down Cleveland Ave. about 6:30 in the morning. Surely, it couldn’t be coincidence that both felines, which lived off the same street separated by a few buildings, vanished during January, even if a year apart.

For no other reason than photographic practice, I started shooting kitty portraits in October 2016. The “Cats of University Heights” series only features animals that are alive—or were when I made the picture. Some passed away (The Colonel) or disappeared (Fess) after being profiled. So Priscilla’s story is told in a different context, like were the tragic tales of Copper and Lou Lou.

As for Kuma, I regret letting him out an hour earlier than usual and for never having him chipped. Priscilla’s old house now has a short-fenced-in yard, where small dogs can occasionally be seen. I often think of her when walking by, even now. She inspired Kuma, and the indoor cats we have today: Cali and Neko.

If sweetness were to be measured by weight, Priscilla was a 10 pound bag of sugar.