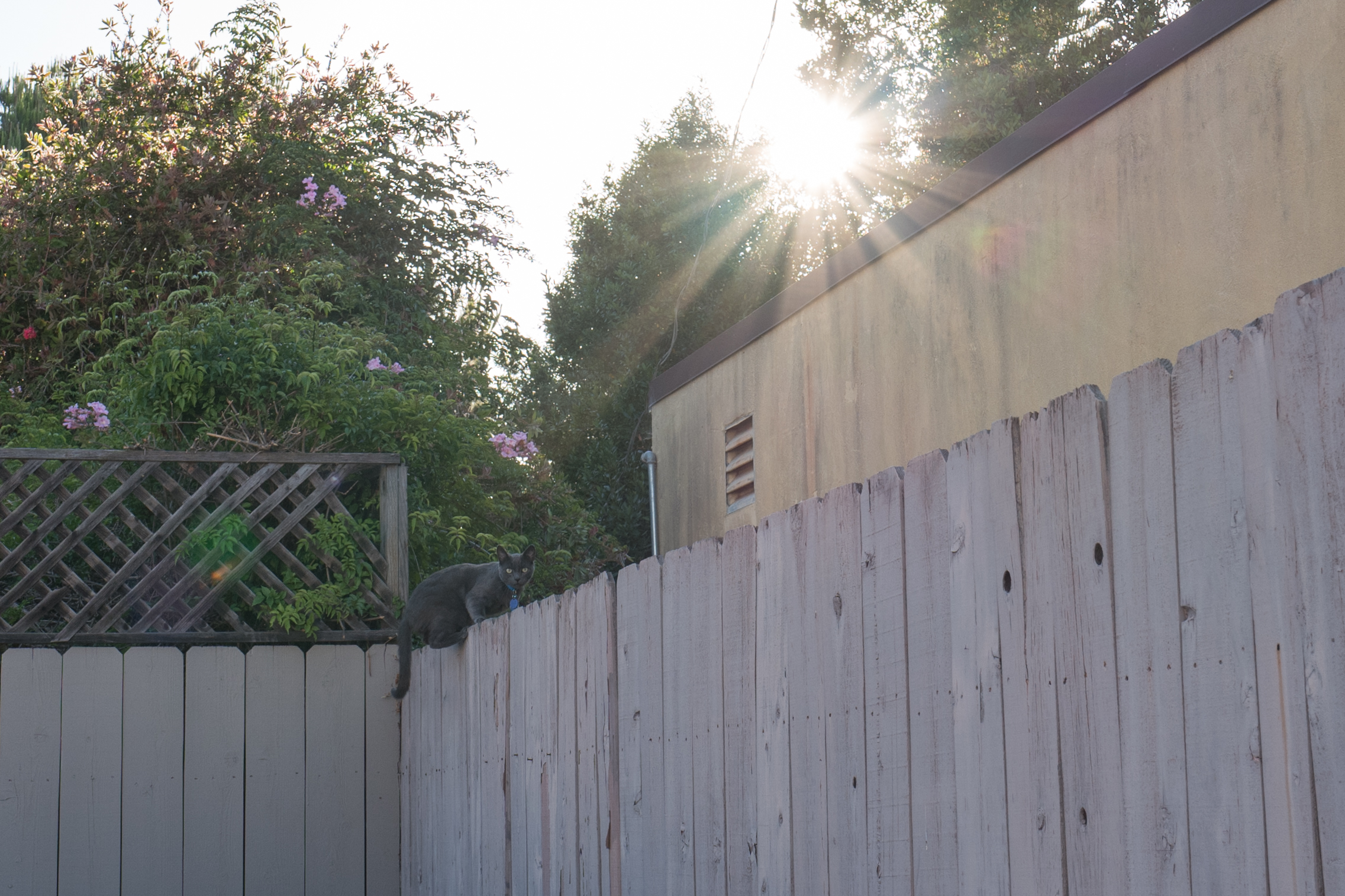 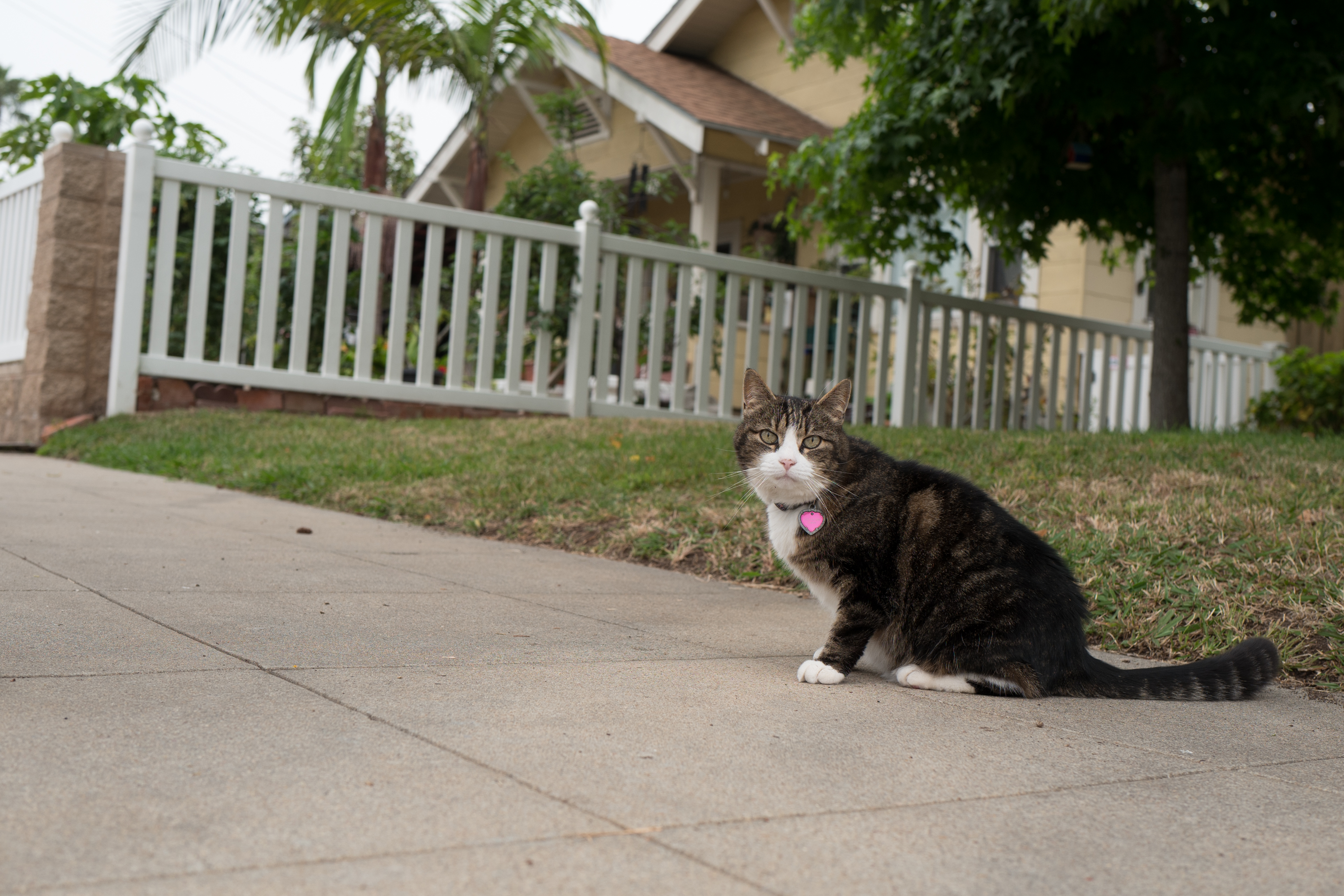 Not long after seeing a furball I call Dainty under a car, another kitty greeted my wife and I as we walked down Lincoln near the Vermont Street bridge on June 4, 2017. Look closely at […] 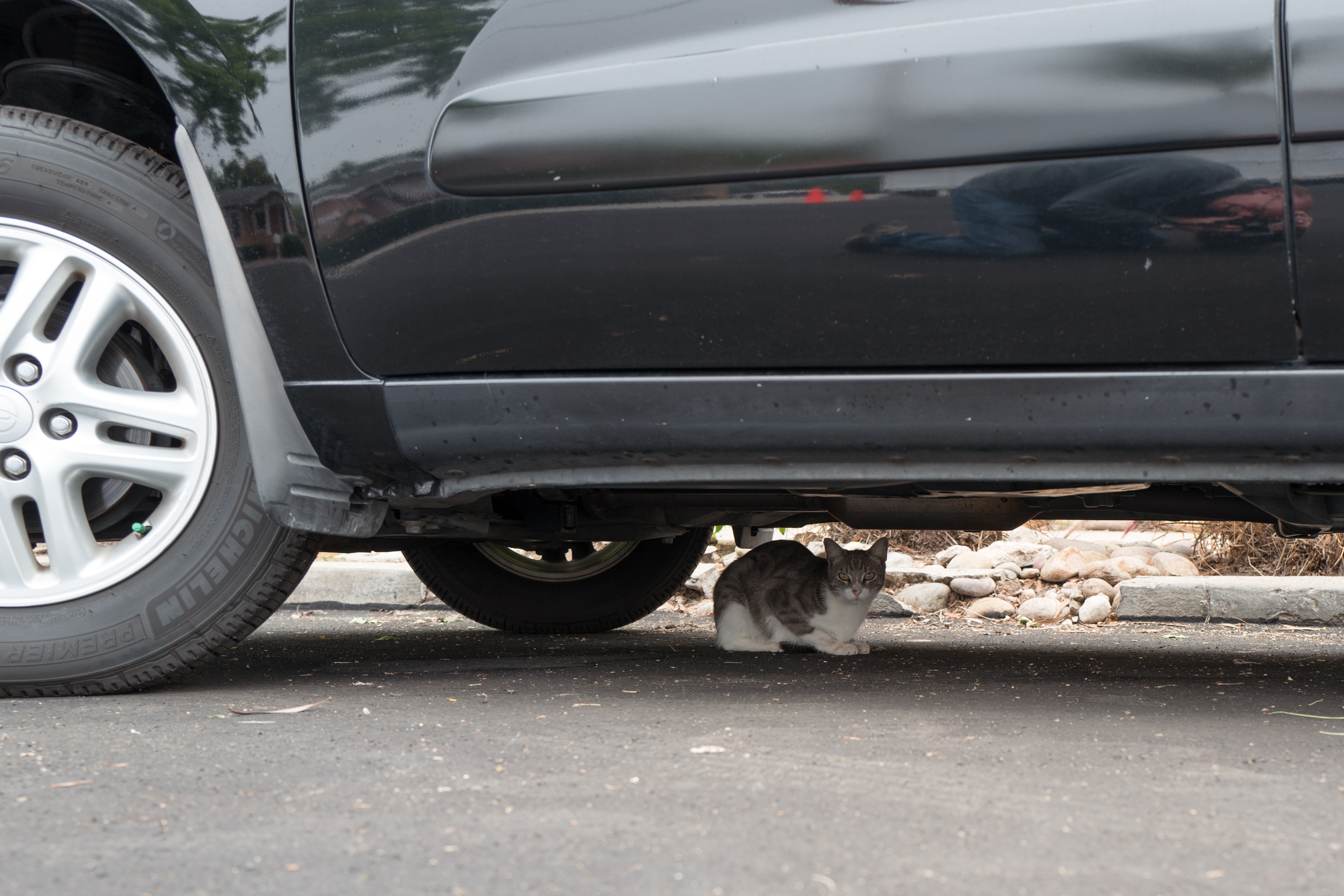 Yesterday, the streets were unusually quiet, even for Sunday, as the Rock ‘n Roll Marathon had closed off portions of 163 and Washington. My wife and I enjoyed a fine walk through what could have been […] 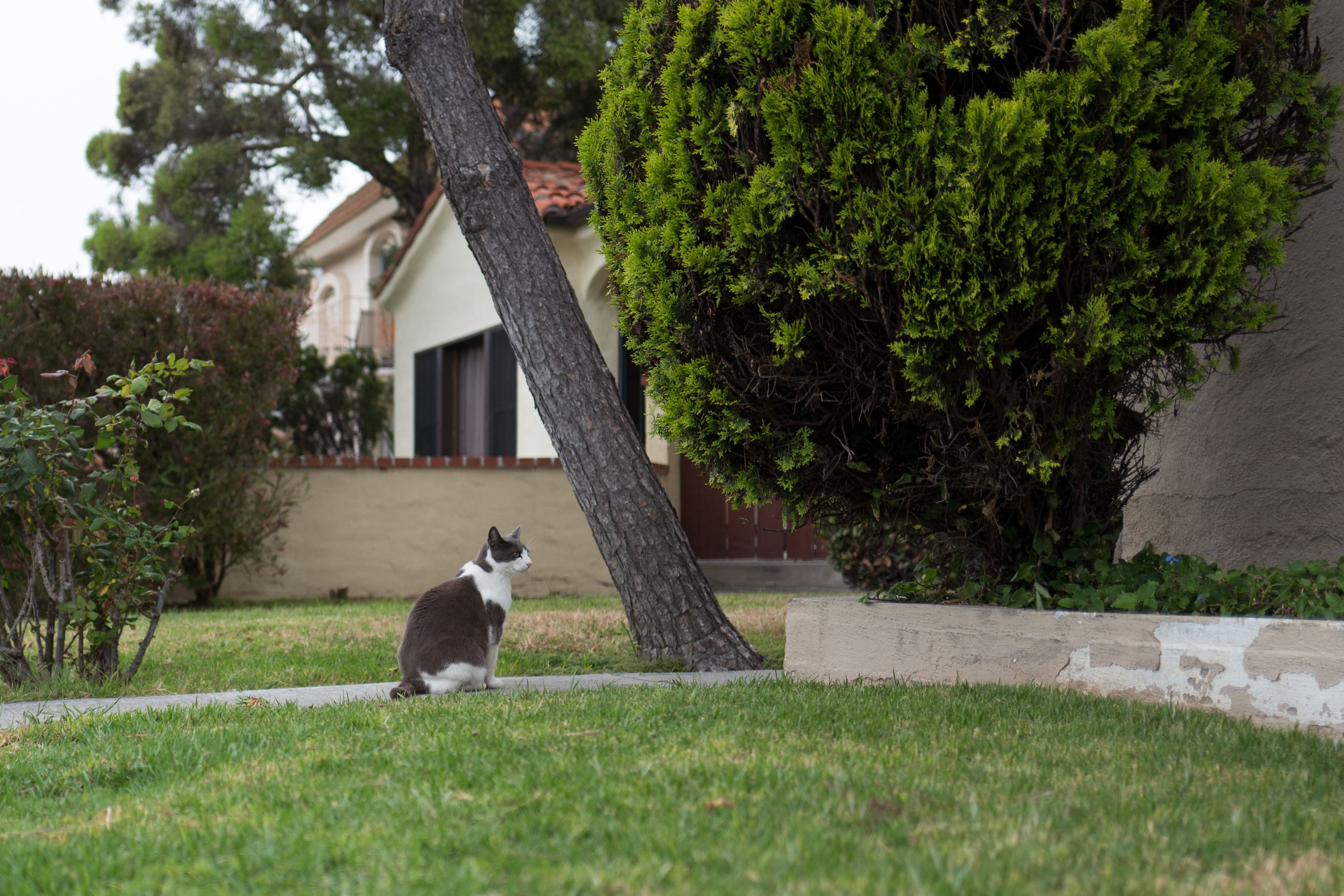 Two mornings ago—Memorial Day—my wife and I walked down Campus between Monroe and Meade, when she spotted a grey and white crossing the street. Whoa, two new sightings on the same block about 18 hours apart. The other: Siamese seen at dusk on May 28th. I also ambled to the other sidewalk, and there captured a series of sequential stride shots as the feline approached before turning into a yard (Featured Image). The other is below the fold. Vitals, respectively: f/1.7, ISO 100, 1/800 sec, 28mm; 11:04 a.m. PDT and f/1.7, ISO 100, 1/1000 sec, 28mm; 11:03 a.m. PDT. Both are crops.

For a compact camera with fixed lens, the Leica Q‘s focus and shutter response is fast. Easily, the entire series of shots as the cat approached is useable. The morning was overcast, which I consider to be perfect photography weather. At f/1.7, shutter speed was plenty fast enough to stop motion. Both pics are crops, BTW. 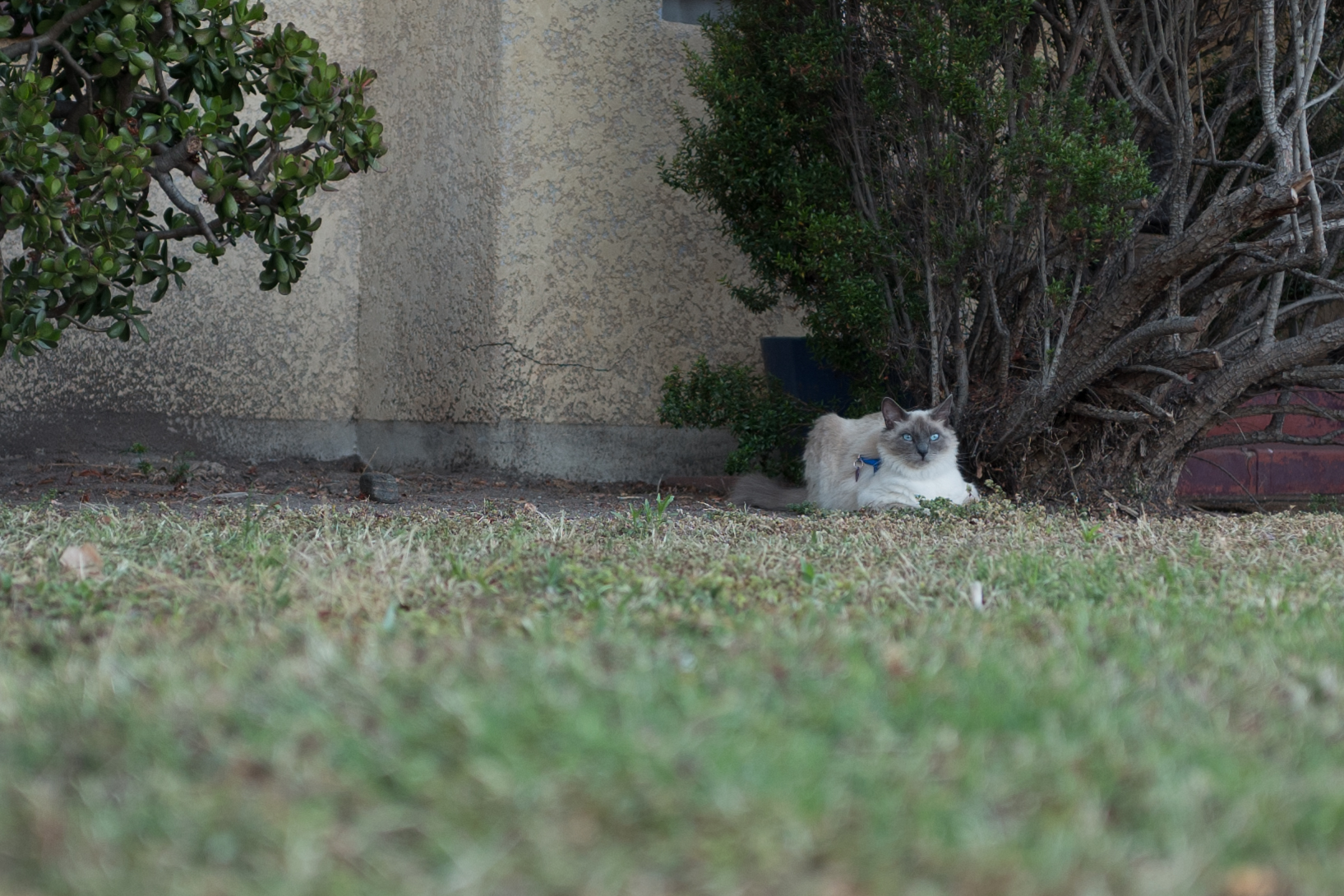 One of Leica Q’s best benefits is its dual-focus system: auto and manual—the latter of which uses a mechanism similar to the German camera maker’s pricey rangefinders. There is a dedicated focus ring and adjustment knob around the lens, which when activated, cause the electronic viewfinder to magnify the shooting subject and present visual cue—green “peaking“—when in focus. This feature is particularly handy because: the lens is wide-angle (28mm); the f/1.7 Summilux glass and 24-megapixel full-frame sensor capture so much detail that cropping-in can replace a telephoto; but when shooting wide, with multiple objects, the auto-focus system can hone in on the wrong one.

On May 28, 2017, as I walked down Campus, midway between Meade and Monroe, I spotted a Siamese not seen before. I lay down on the sidewalk to capture the moment. Since the kitty was so still, I took a few extra seconds to switch to manual focus. Interestingly, as dusk settled, none of the auto-focus shots were right. The Featured Image is spot on the cat, in this close crop. The original, which is below the fold, gives actual perspective and illustrates how much detail the Leica Q captures. Vitals: f/1.7, ISO 100, 1/250 sec, 28mm. Time: 7:12 p.m. PDT, about 40 minutes before sunset. 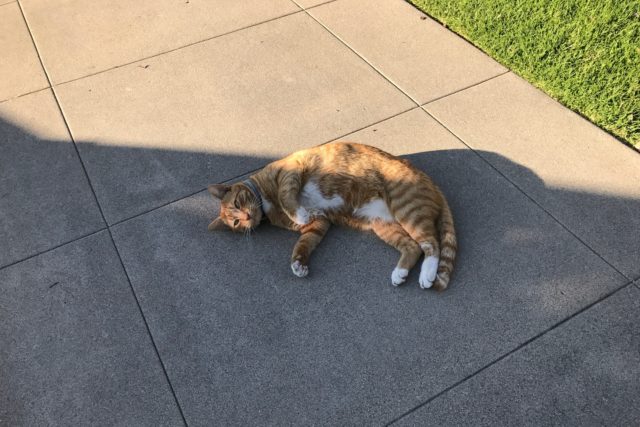 My Leica Q mistakes compounded on May 26, 2017. Earlier in the day, I forgot to change the shutter speed from the previous night’s shooting. Later, the battery died during my attempt to photograph an approaching […] 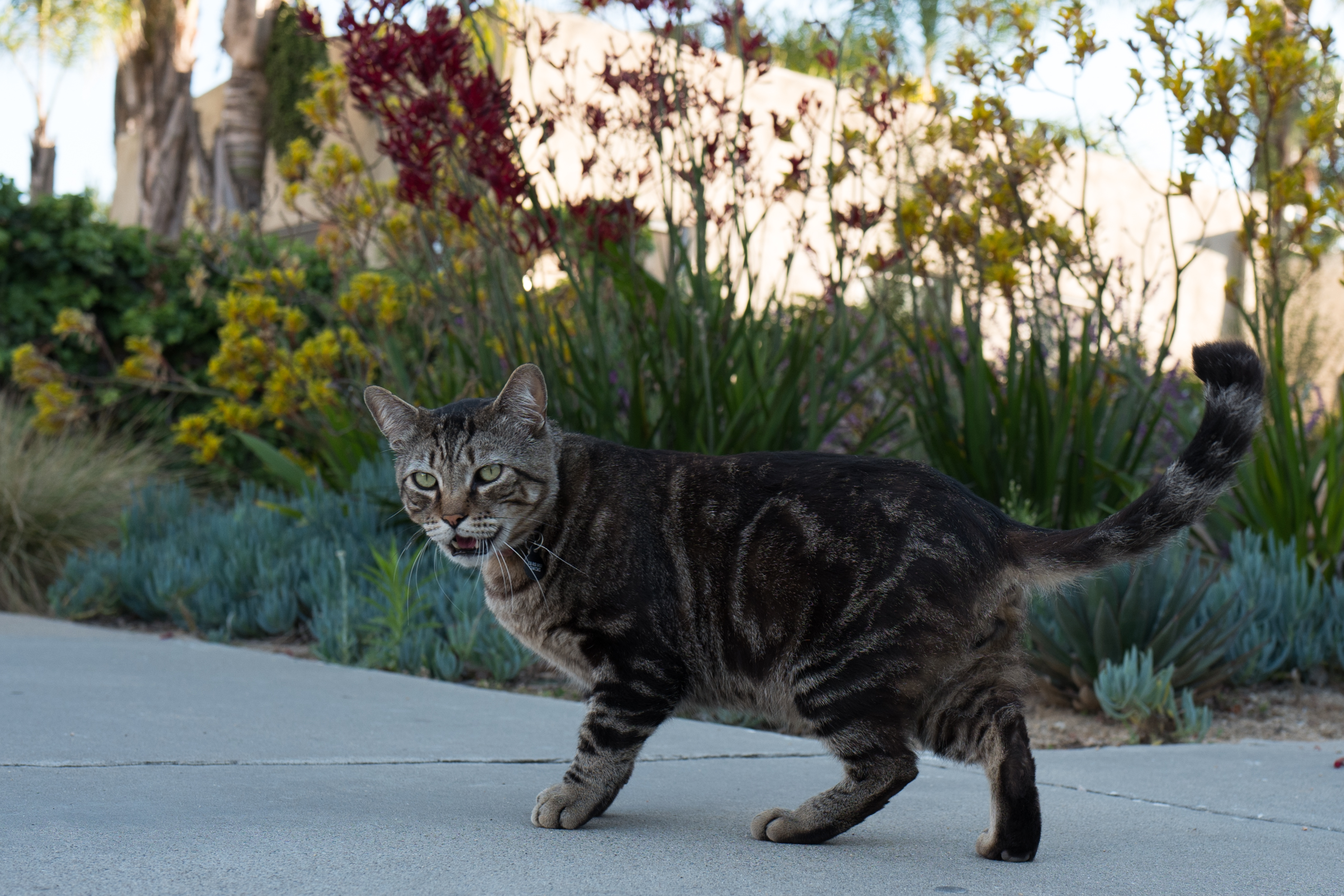 I am a pitiful Southern Californian resident—for not speaking, or reading, a word of Spanish. Fortunately, Google gave my linguistic handicap a little boost yesterday evening, when encountering the large-pawed beast who is our featured feline this cool Caturday. Walking down Monroe from Park Blvd. towards Texas Street, I heard a furball meowing on the other side of a tall hedge at Georgia. I rounded the corner and peaked inside. The beastie came running out on the sidewalk to greet me.

The number of owned street cats without collars surprises me, but this friendly brute was an exception. As he rolled around for pats, I looked at his tag, which gave a phone number followed by “Gracias” on one side and “Mellamo Peso” on the other. I may be ditz-for-non-English-language brain but nevertheless recognize “Thank You”. But the other, I assumed was a first and last name, or perhaps a nickname. I whipped out iPhone 7 Plus and Googled “Mellamo”, only to discover that it means “my name is”. That caused me to resume petting with one hand and lifting the tag with the other; maybe I misread, because who calls their cat Peso? Crazy thing, makes sense. He is one big boy, and the name translates to “weight” (or so says Google). He is Maine Coon size but leaner. 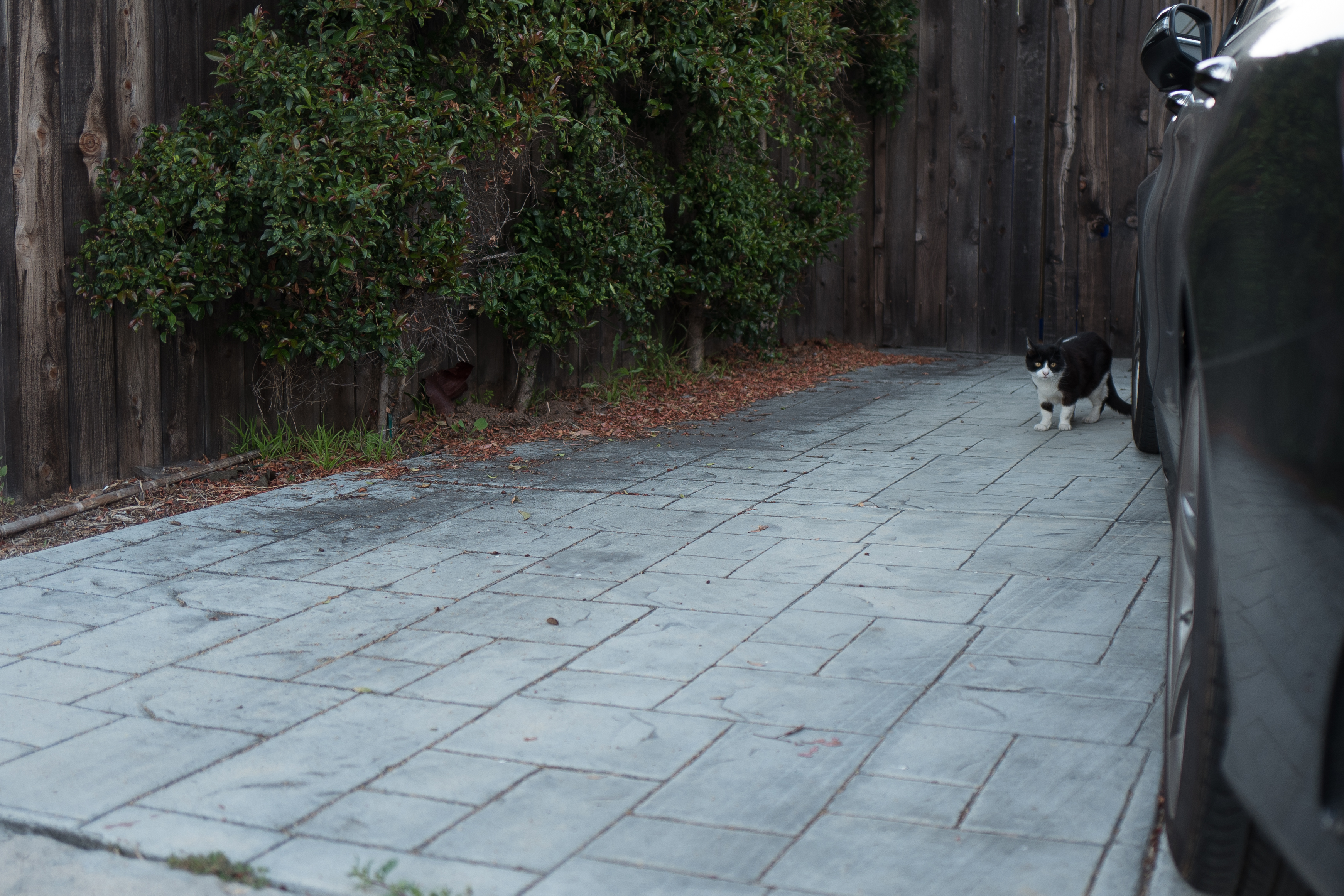 A combination of circumstances complicated capturing today’s featured feline. On May 20, 2017, early evening, I walked down Mission Cliff towards Trolley Barn Park, where movie “ET: The Extraterrestrial” would be shown on a humongous air-inflated screen. At Park Blvd., a skittish kitty skirted across my way around a parked car. I got down low and looked for the flighty beast. Problem: I couldn’t make out anything in the viewfinder. The Diopter Adjustment knob moved out of place, so I shot blind so to speak.

The other problem is about software intelligence. I switched everything to auto, to compensate for the viewfinder problem. But the Leica Q didn’t adjust the settings for my shooting situation. The cat briskly moved to my flank across a front yard to a second car (the Featured Image) then over another lawn and onto the sidewalk, trotting away. Vitals: f/1.7, ISO 100, 1/80 sec, 28mm; 7:32 p.m. PDT. Many of the other shots are 1/60 sec. Auto-set higher ISO and faster shutter would have made a better moment. There are reasons why the camera has manual controls. But blinded, I didn’t see what needed correction. 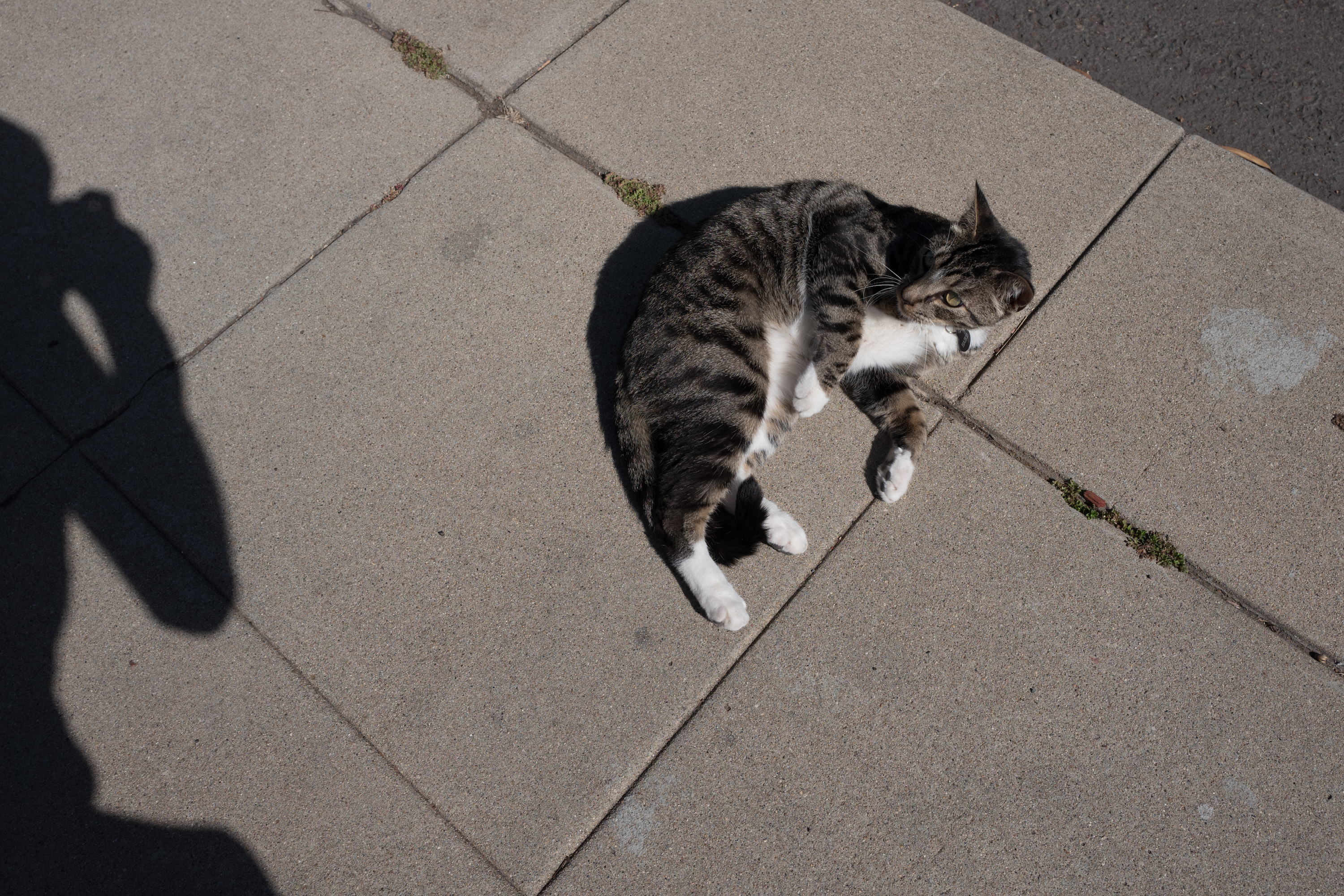 What a surprise. Nearly across the street from where I spotted the Tortoiseshell for the first time on May 15, 2017, a grey and white tiger-tabby greeted my Mrs. and me four days later. We visited the ever-friendly Haiku (real name) where Cleveland Ave. meets Golden Gate. I shot the Featured Image using Leica Q. I cropped the original DNG, for composition, before exporting the JPEG from Adobe Photoshop Lightroom. Vitals: f/7.1, ISO 100, 1/100 sec, 28mm; 9:13 a.m. PDT. 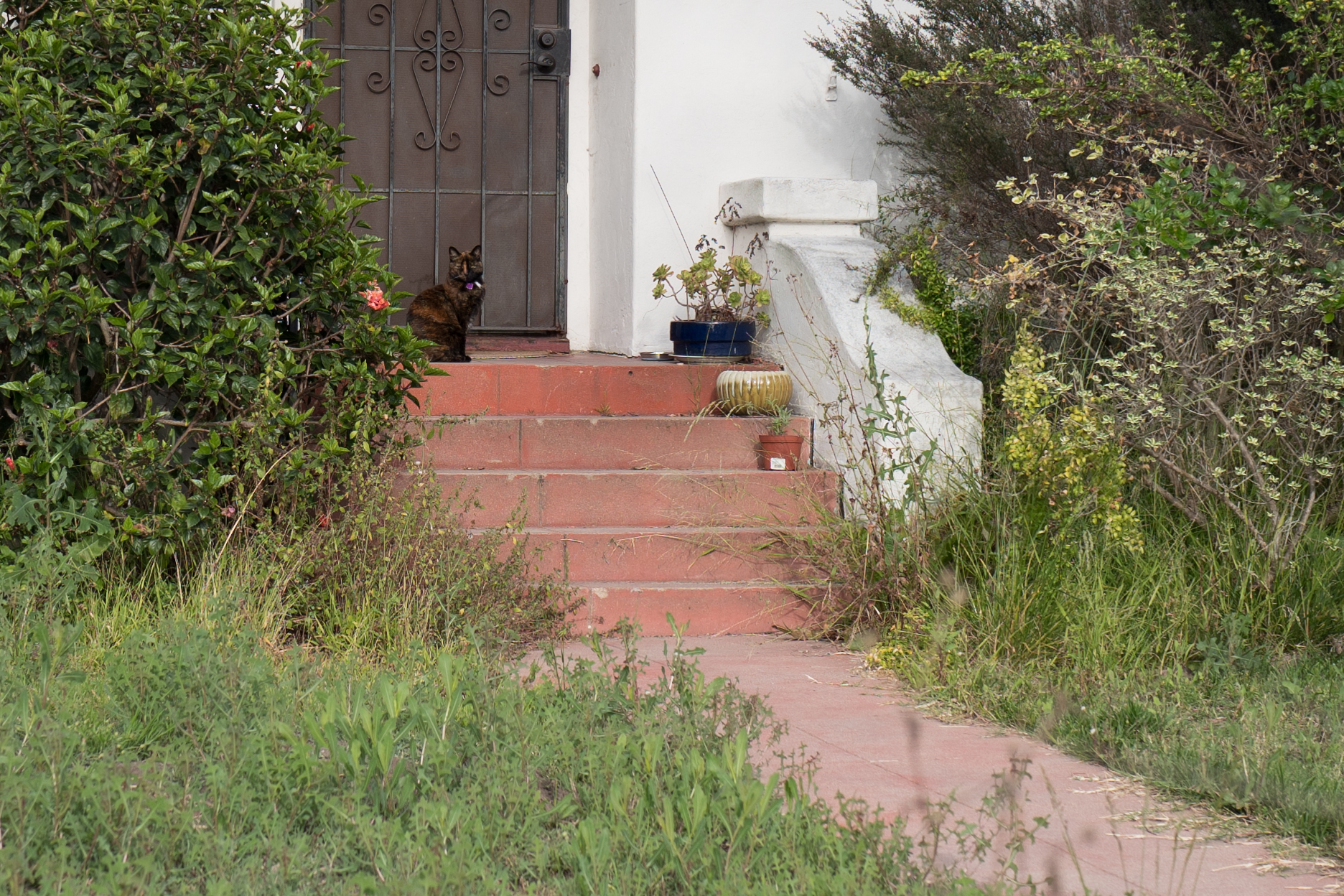 I am amazed whenever discovering a never-before-sighted furball so close-by to my apartment. This tortoiseshell made my acquaintance from a distance late-afternoon May 15, 2017—one block away, on Cleveland just past Madison before the overlook. She sat on a doorstep waiting for someone to let her in. From the empty driveway, it’s a guess the owner hadn’t come home from a day at the job.

The Featured Image is the second-to-last of 13 captures, and I debated about choosing this one because the kitty’s distinctive bob-tail is obscured by bushes. I captured the moment at 5:35 p.m. PDT, using Leica Q. Vitals: f/2.8, ISO 100, 1/800 sec, 28mm. The pic is close-cropped from the original, which shows the yard and the next (I shot from the sidewalk). 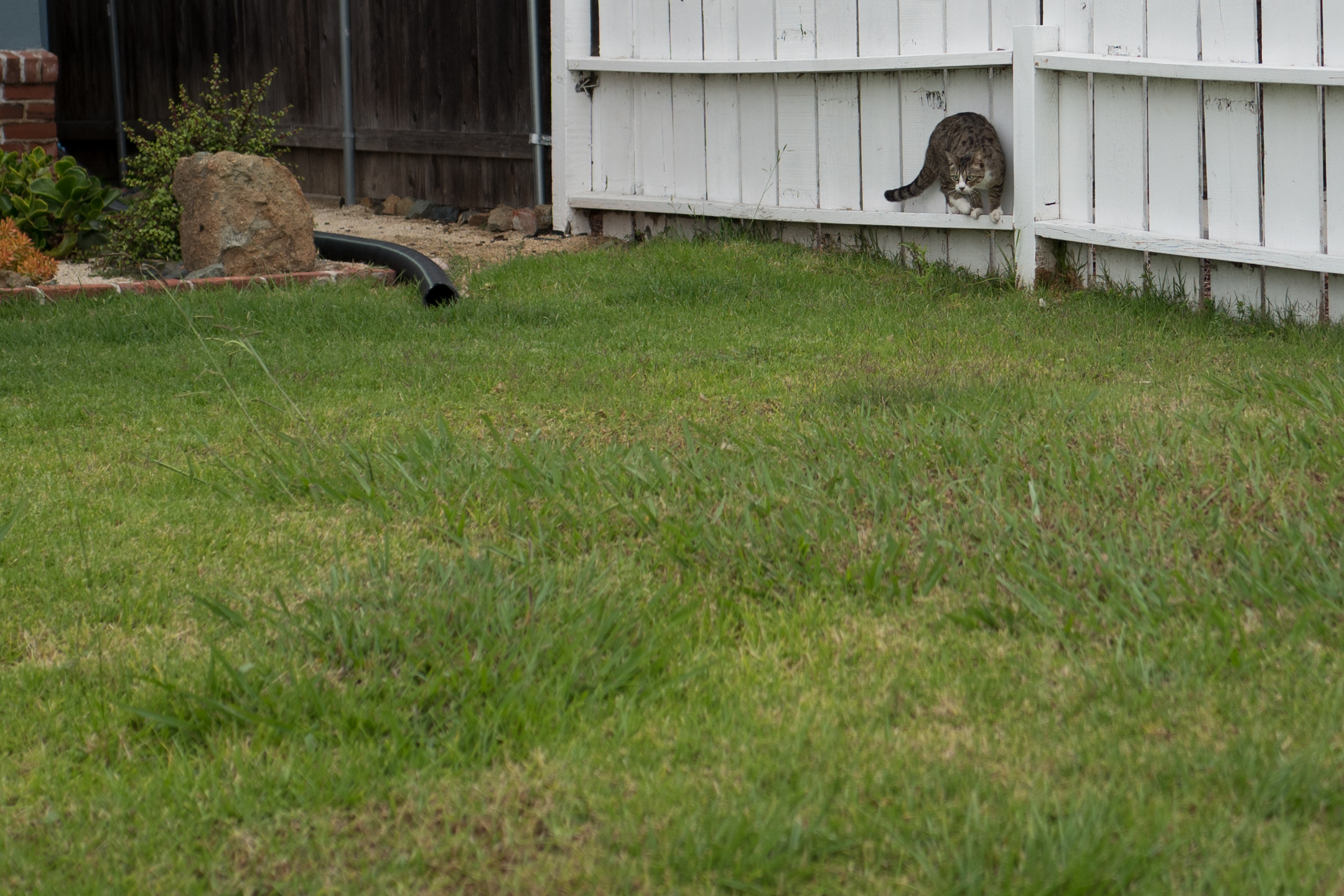 Earlier the same morning—May 12, 2017—that I spotted the siamese on Meade, a tiger-tabby leaped away as I approached on North Ave. He perched inside a fence in the yard next door to where The Colonel […] 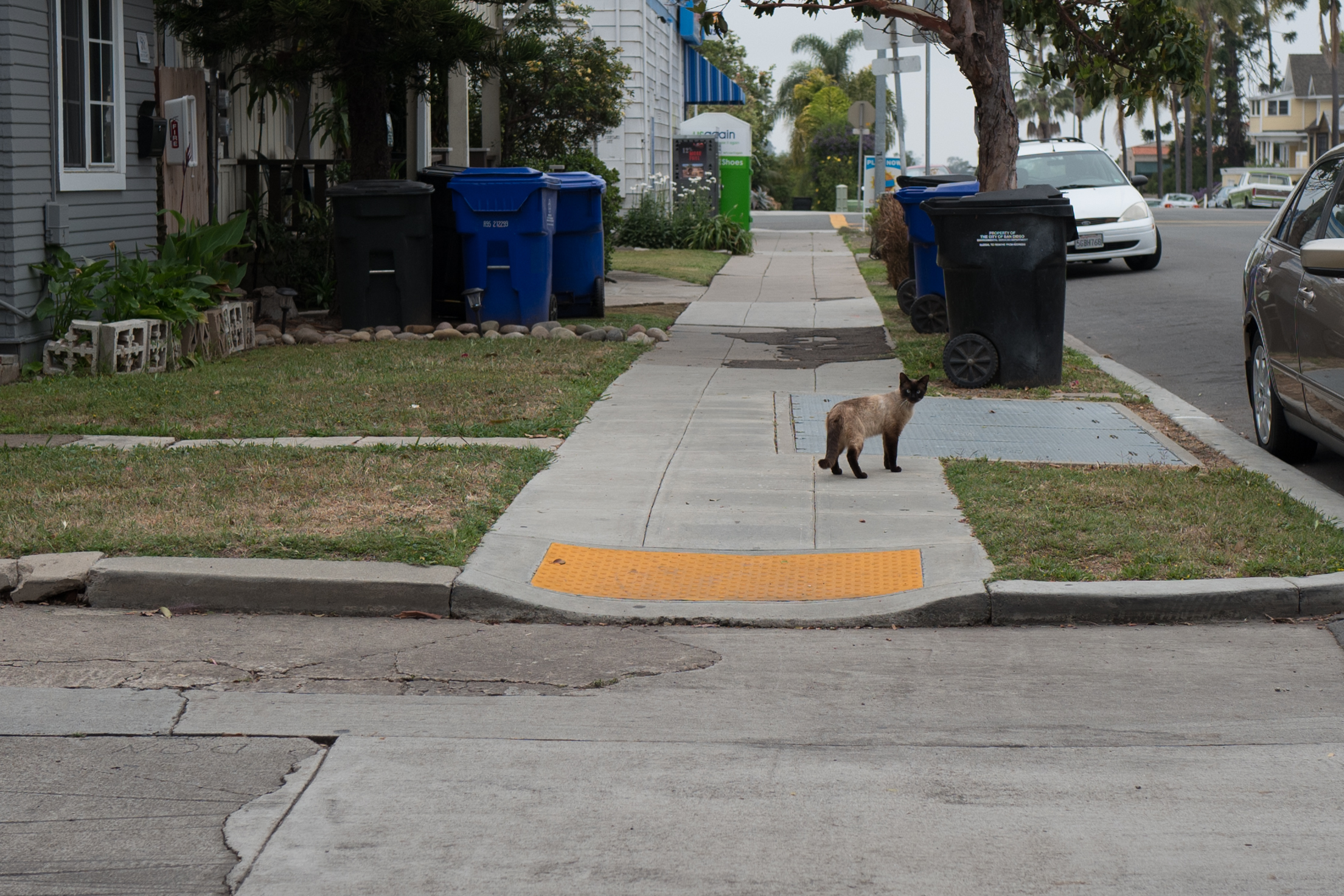