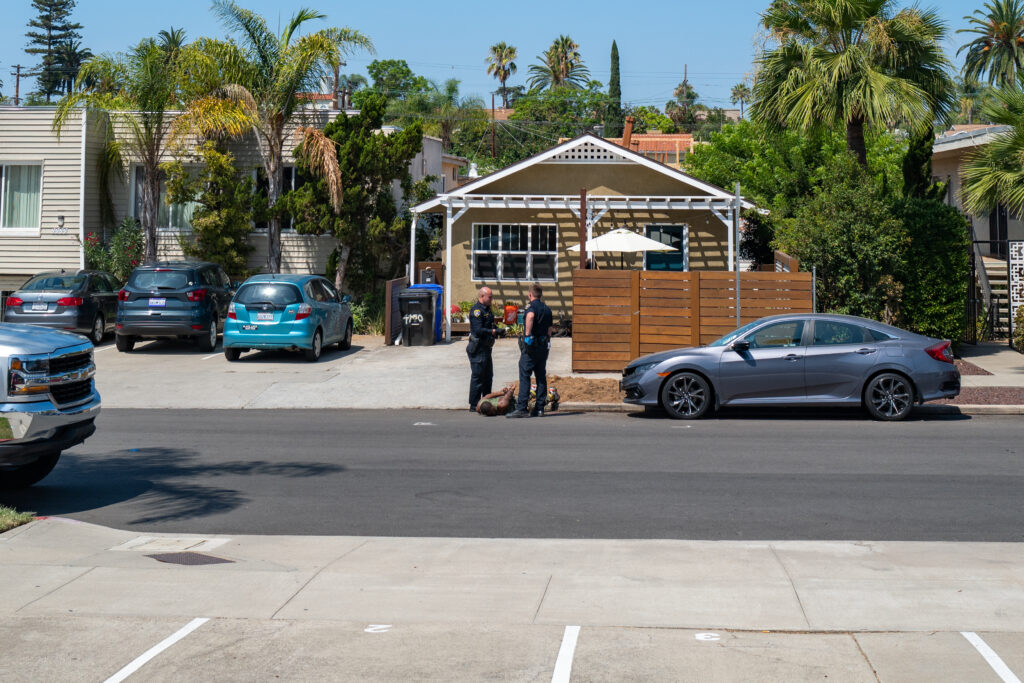 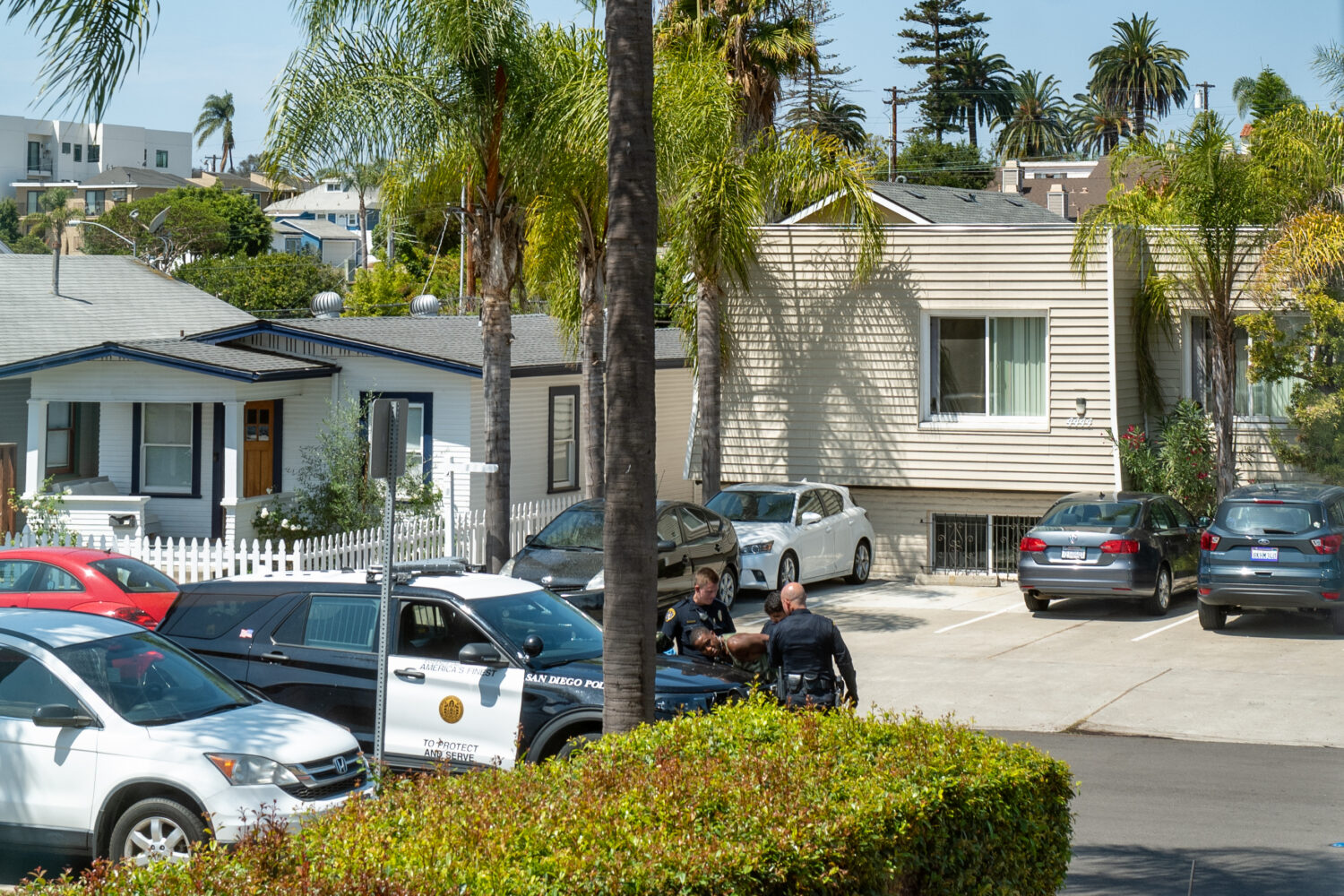 Minutes later, a police officer speaks with the owner of a pickup truck parked in front of a fire hydrant; the vehicle moves and a cop cruiser pulls up, upon which the suspect leans forward, as seen in the second photo, which is cropped more than 100-percent. Vitals: f/5.6, ISO 100, 1/250 sec, 28mm; 11:14 a.m. The men in blue later stand him upright, and there is questioning and conversation that I can’t clearly comprehend. 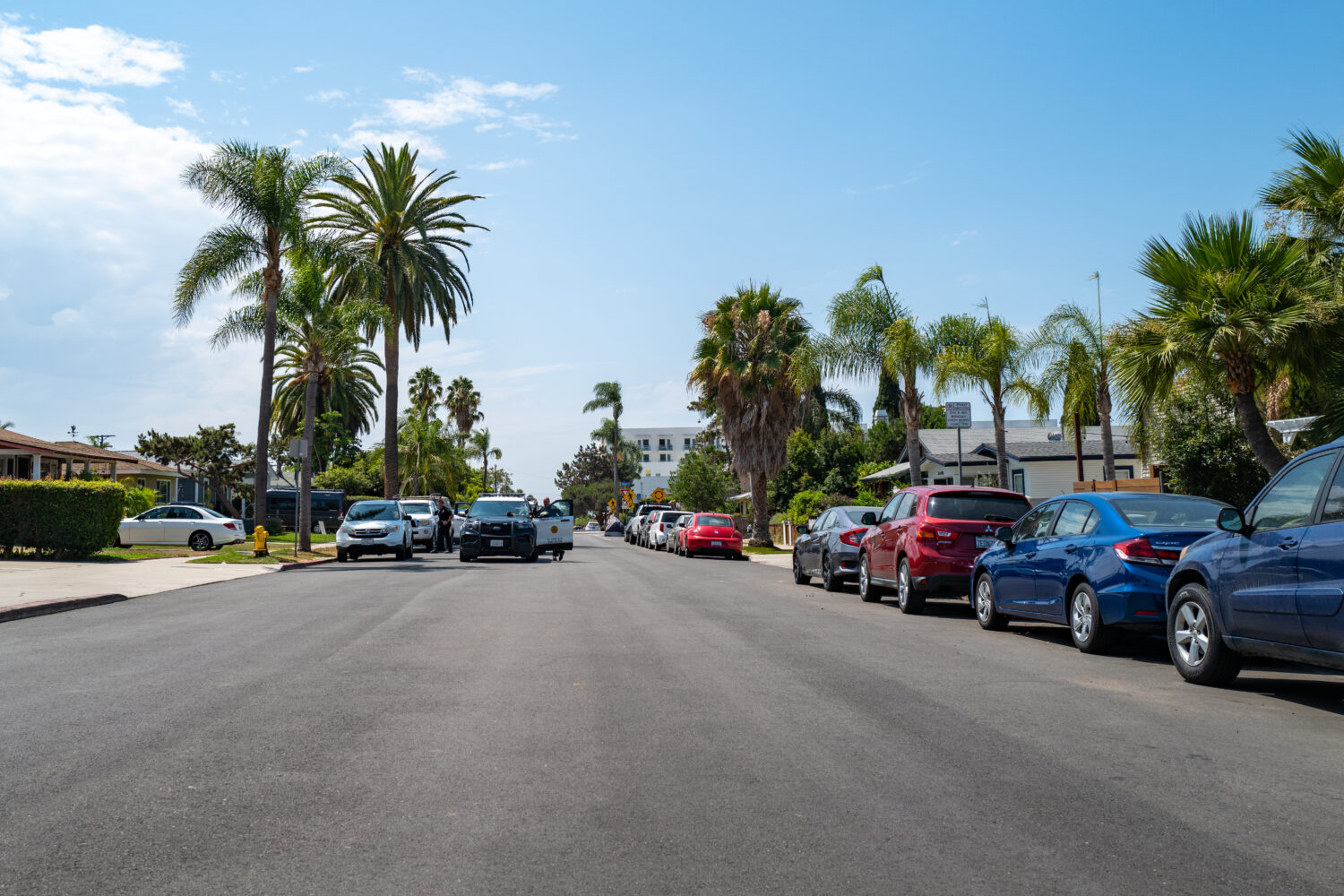 It’s 11:31 a.m., and I am talking to neighbors. Before the police arrived, one of them witnessed the suspect run through his apartment complex from the alley behind with another resident chasing. Listening to an officer question some next-door guests, one a Navy doctor, I learn that they helped tackle and restrain the suspect. A gentlemen brandishing press credentials claims that two men had fled a hit-and-run accident involving a golf cart and that the handcuffed man is one of them. Photo three (vitals same as two, except for 1/1250 sec and timestamp) shows relative calm on the street; the suspect sits in one of the cruisers. I approach two officers, thank them for their service, and ask about the arrest. One explains they’re still investigating, part of which is making sure they have detained the right person (e.g., not taken the wrong one). 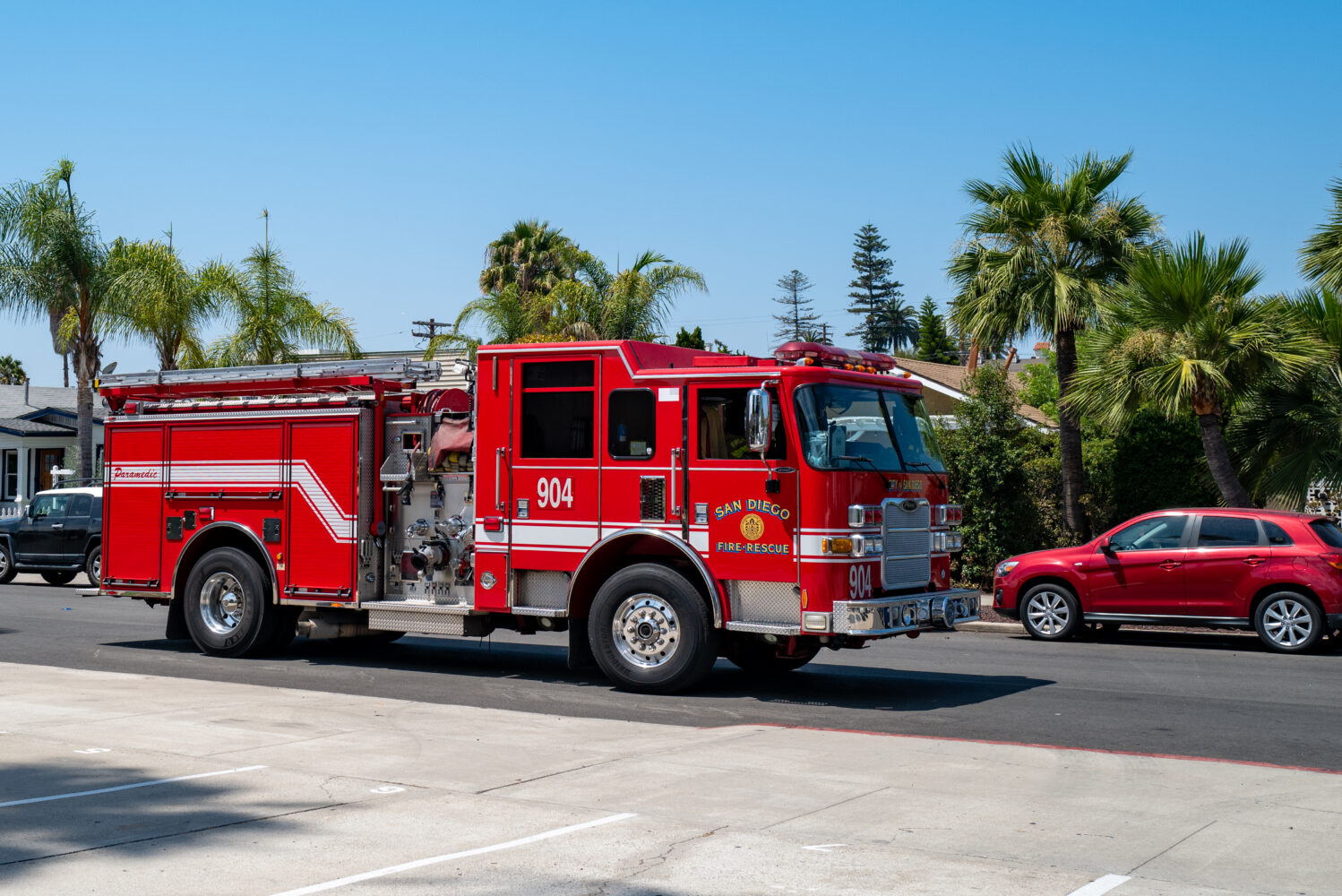 At 11:48 a.m., two San Diego Fire and Rescue vehicles arrive—to which the next-door guests whoop and cheer. Apparently one works EMS elsewhere and he is familiar with this particular engine company. The suspect is removed from the cruiser, examined, and put in an ambulance. The media credentialed guy goes over to the guests and says a doctor’s diagnosis would be useful (hint, hint); the suspect may be injured. Photo four vitals: f/5.6, ISO 100, 1/640 sec, 28mm. 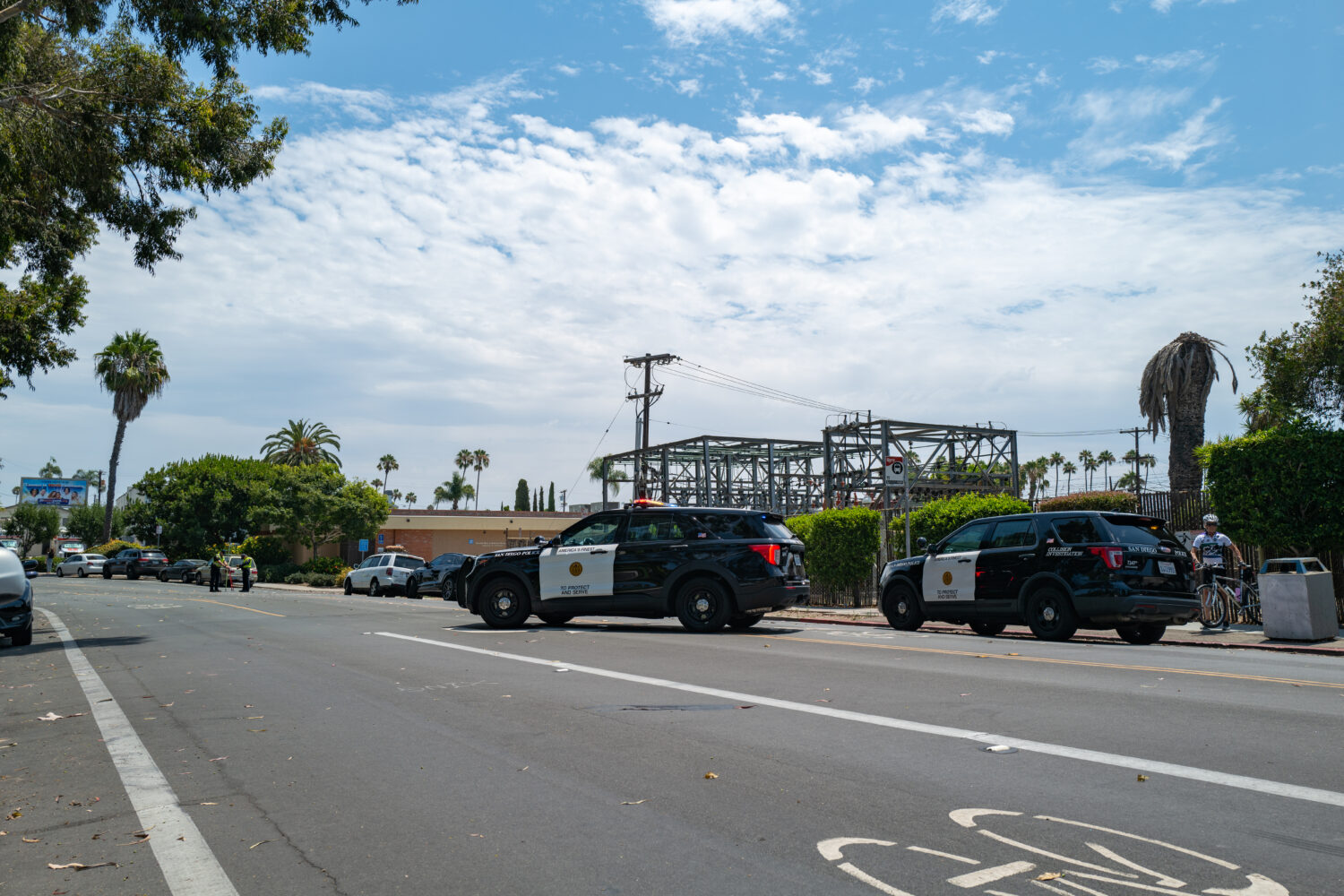 I chat with the neighbor who witnessed the run and chase, while EMS examines the suspect. The 10-year resident is heartbroken about loss of the aforementioned Palm and angry about the cottage clearcutting that destroyed the lovely wildlife habit outside his apartment windows. During that conversation, my wife arrives and we set off to find the rumored hit-and-run accident location. Nextdoor posts claim the 4600 block of Florida at Monroe (which doesn’t exist). We walk down the street named for the Sunshine State, to discover a crime scene investigation in progress along Adams outside the alley between Alabama and Florida. Photo five vitals: f/5.6, ISO 100, 1/1250 sec, 28mm; 12:25 p.m. 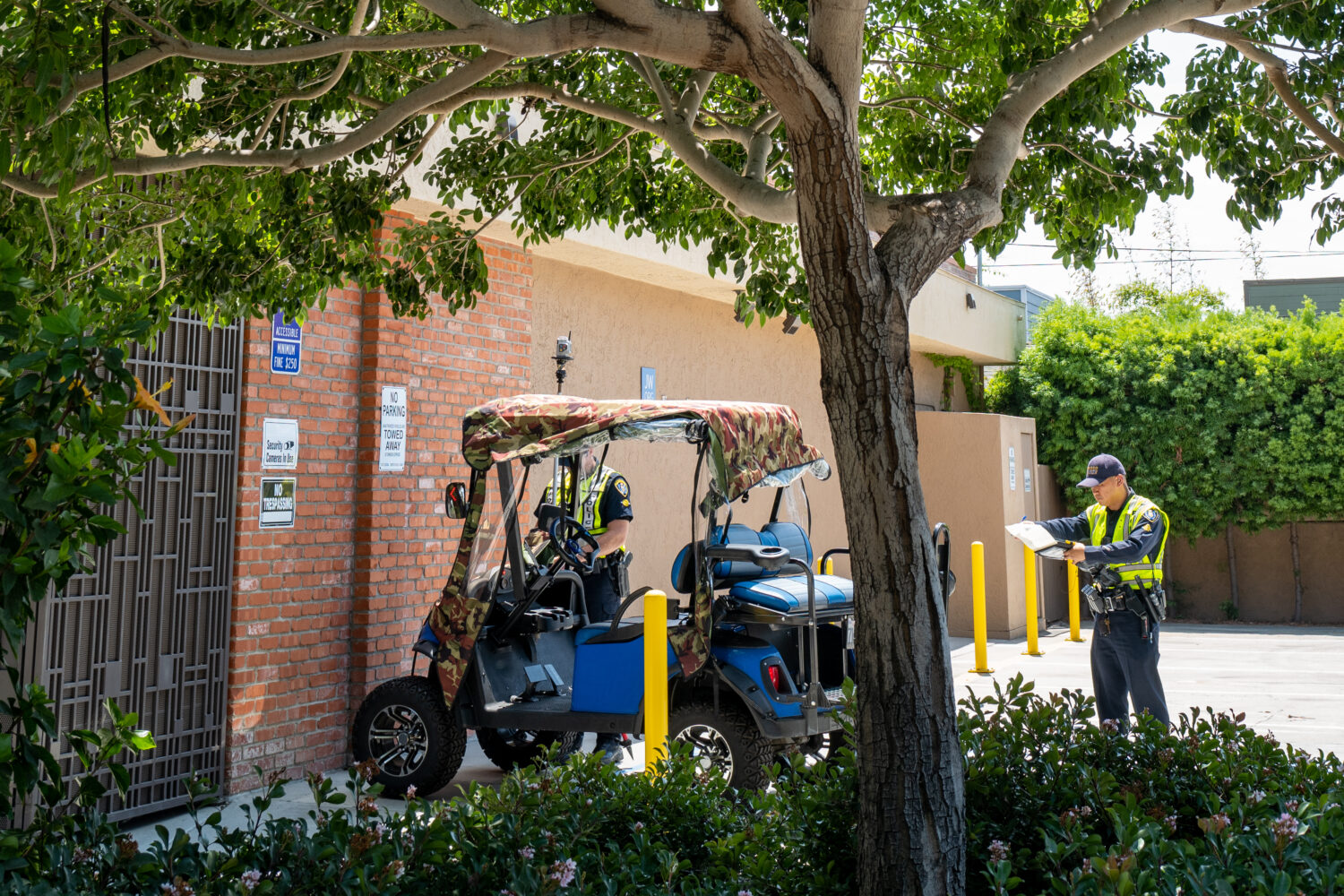 Annie and I walk down Adams and see police investigators examining a golf cart parked in the lot outside the Kingdom Hall of Jehovah’s Witnesses. Photo six vitals: f/5.6, ISO 100, 1/160 sec, 28mm; 12:31 p.m. Across the alley is the backyard where until last week feral felines Coon and Ghost had lived for about eight years. The property is being cleared for “Probate Auction”.

That’s all I know to be true, from first-hand interaction and observation. A San Diego Union Tribune story claims that a golf cart overturned, injuring two people. Times of San Diego, citing OnScene.TV, claims the driver lost control, a passenger fell out, and the “driver stopped, and along with another male, fled on foot”. Both reports refer to the fallen passenger as suffering a “brain bleed”. Quickly searching OnScreen.TV, before publishing this post, I find nothing about the incident. Perhaps if something credible becomes available, I will update.