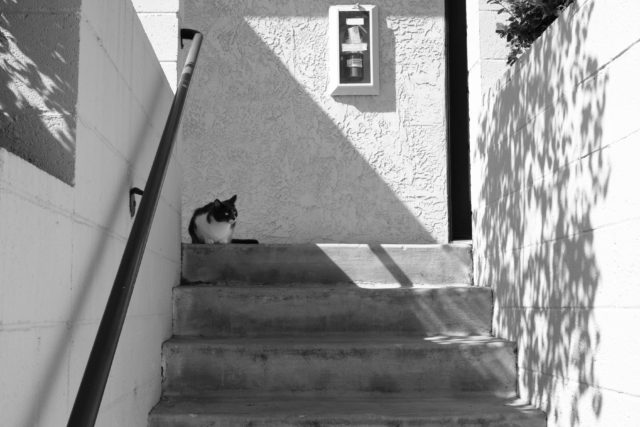 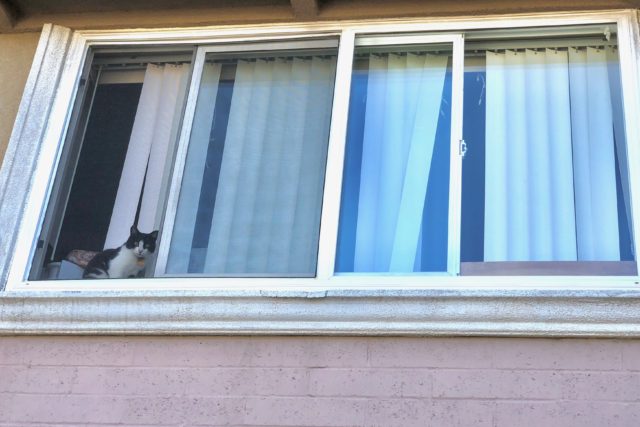 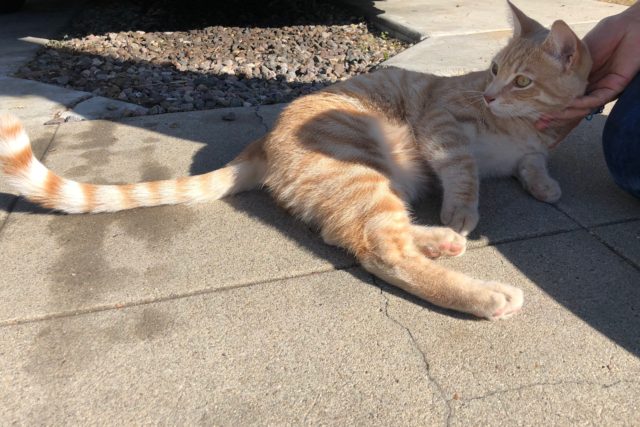 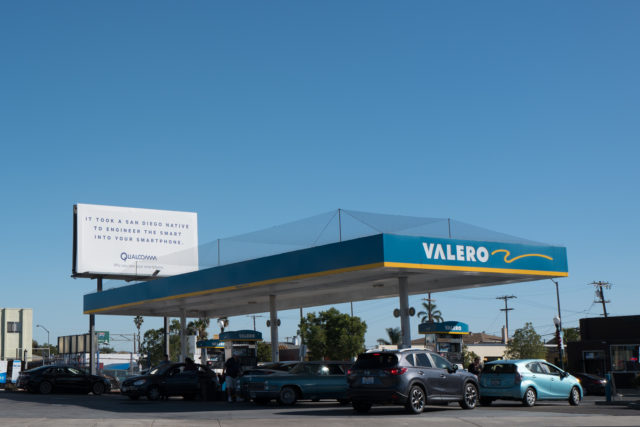 For weeks, I wanted to capture this sign along Adams Ave., but each passby was in the car. Until today, when I walked to Pet Me Please for cat food. The Featured Image is from Leica Q. For comparison, the other is an iPhone X shot, using the second lens to 2X zoom. 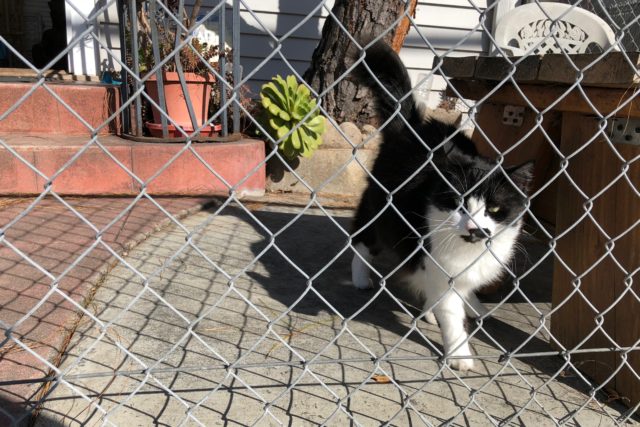 When walking to the grocery store, and expecting to carry back a hefty load, I usually leave camera behind—as was the case this morning. So I had to rely on iPhone X when meeting Lola and her owner, along Polk Ave. between Georgia Street and Park Blvd.

As I trudged up the hill, a lady approached her property fence to the sounds of a meowing cat greeting her from behind a mesh-like security door. I asked about her kitty, who came out into the small yard and promptly attacked a grey furball that neither of us humans had seen. The intruder immediately fled, and Lola returned to rubbing against anything and everything, issuing sweet meows. 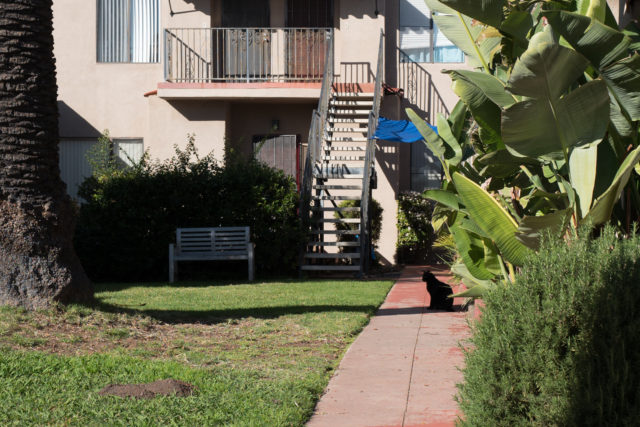 Early afternoon yesterday, my wife and I spotted a handsome Bengel-like furball whose portrait I shot with iPhone X in a yard off the alley coming from Cliff Street to Adams Ave. Disappointed with the results, I later returned with Leica Q but ended up at a nearby apartment courtyard capturing another kitty, a blackie.

He rolled in grass neaby the front gate, presenting outstanding opportunity for lovely candids. But as I slowly approached, the feline fled two-thirds-away across the lot. Just after I composed and shot several photos, one of the residents came up to the gate. She knew the shorthair, who belongs to a neighbor, and said the animal is called Token. I presume, thinking of the cat’s color, that his name comes from South Park character Token Black. 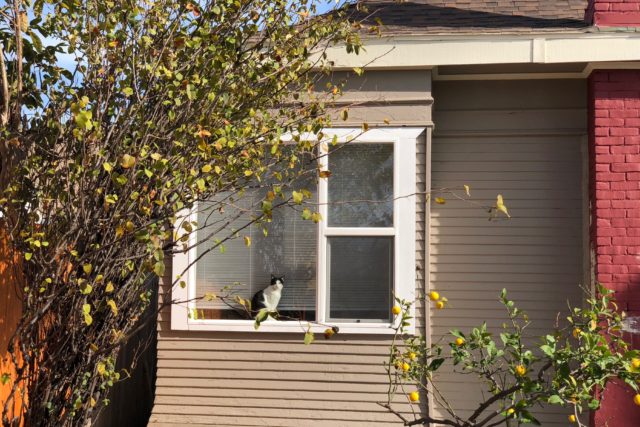 Our second, sighted window watcher on Jan. 16, 2018 follows-up Seer (my nickname), along with 10 others since the series started in October 2016: Charm, Cool, Curious, Glass, Kit, Seeker, Star, Still, Twain, and Watcher. Another, Burglar, climbs into one.

The house next to the American Market, on Cleveland Ave., is a recent renovation and subsequent rental. I dub the kitty in the Featured Image Fresh, for being a neighborhood newcomer. Hehe, she also looks out on freshly growing oranges. I captured the portrait, while walking home with groceries, using the iPhone X second lens to 2X zoom. Vitals: f/2.4, ISO 16, 1/706 sec, 6mm; 1:12 p.m. PST. 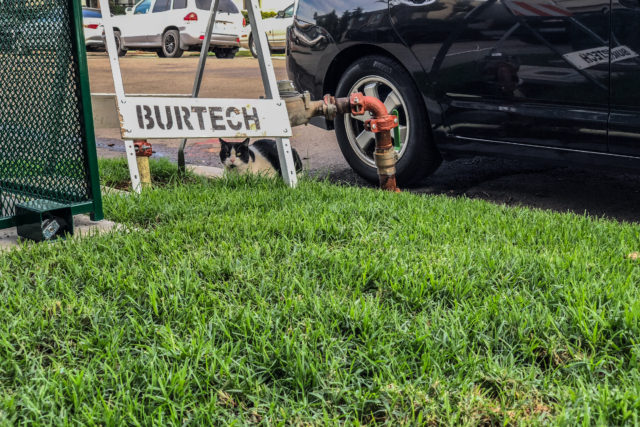 Construction crews return to ripping up our street—so they can place new water (and possibly sewage) pipes—following a three-day break (for the weekend and Martin Luther King Jr. holiday). During December, the contracted company worked on Louisiana, which is where I met this fine feline, on Jan. 14, 2018, appropriately cowering behind one of the many, remaining Burtech signs.

But I am fairly sure we had a near encounter the previous evening. Returning home with Pizza Hut pie, driving up Monroe from Texas Street, I passed a Tuxedo-like kitty, with massive white ruff, sitting upright, beyond a parked car, slightly in the roadway, across from Louisiana. I watch my speed in the neighborhood for a reason: kids and cats. My wife got an earful about the strange sighting while enjoying a mouthful of cheesy crust, zesty tomato sauce, and bountiful toppings (Super Supreme without black olives, baby). 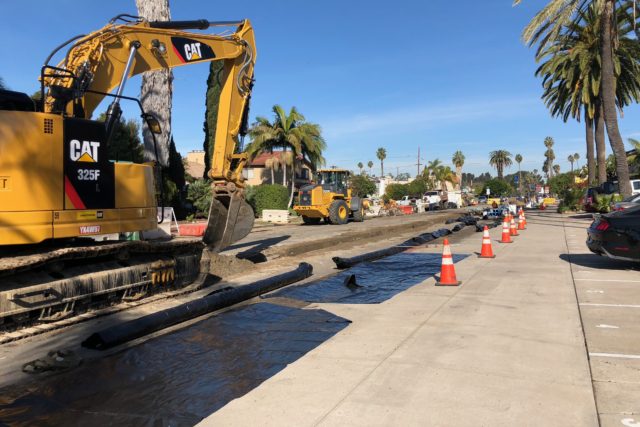 Call me mistaken.  Pipeline road construction only seemed to start in earnest yesterday. This morning, Burtech heavy-machinery gouged a long narrow trench—what my wife calls “the mote”—down our street. We are overwhelmed with disruption—like the car being blocked from leaving its assigned parking space—and constant noise. But that’s okay, because the road crew clearly makes tremendous progress. Maybe we won’t be besieged for months, as I had feared.

To document the moment, but not make the workers too uneasy, I used iPhone X instead of Leica Q. Smartphone snapping is familiar to most people and less threatening. In the Featured Image, you can see the trench, for new water pipes, going down the street. I wonder: What about the old ones? Do they just stay in the ground? Vitals: f/1.8, ISO 20, 1/2288 sec, 4mm; 10:39 a.m. PST. 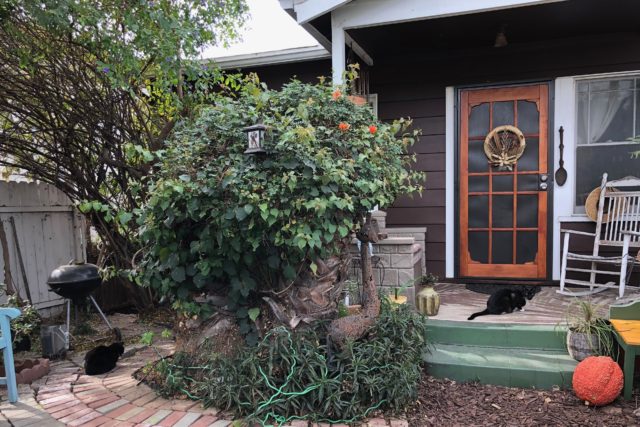 For the third time since this series started in October 2016, kitties living just outside the neighborhood boundaries participate. My wife and I met the first, nicknamed Chill, on Arizona Street—same as the two you see in the Featured Image. Texas separates University Heights from North Park, and Arizona is one street beyond. The other honorary furball, Sammy—and that’s her real name—lives across Washington Street in Hillcrest at DC Computers. Yep, she is the shop cat.

Sometimes exceptions must be made, but rarely—why this is only the third among 131 postings. I found the cats and their (presumably) owner’s house too quaint to resist. That said, had the pair been another street beyond Texas, they wouldn’t make the cut. Lucky for them, too, that it’s the slowest sightings time of year. 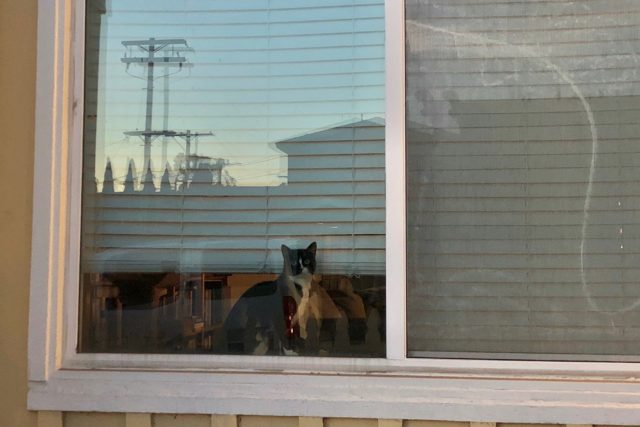 How much for that pretty kitty in the window? About 30 minutes after sunset today, my wife and I went out for a spontaneous late-afternoon walk, where she spotted this tip-top Tuxedo looking out, along Meade Ave. between Alabama and Florida. The series features nine kitties sitting inside windows, staring out: Cool, Curious, Glass, Kit, Seeker, Star, Still, Twain, and Watcher. Another, Burglar, climbs into one.

I did not bring Leica Q, unfortunately; iPhone X struggled in the descending dusk, getting some benefit from the sunset’s lingering glow cast against the glass. Vitals, for the Featured Image: f/1.8, ISO 100, 1/4 sec, 4mm; 5:17 p.m. PST. However, I contend that the EXIF is wrong. I tapped the 2X icon for the f/2.4 second lens, and this portrait, and another, absolutely are zoomed compared to the first, which I am certain was f/1.8. Sigh. the photo is noisy, which is most evident at full view; Leica capture wouldn’t have been. 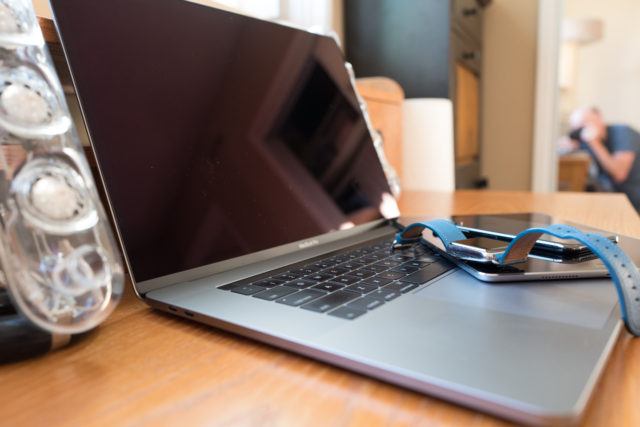