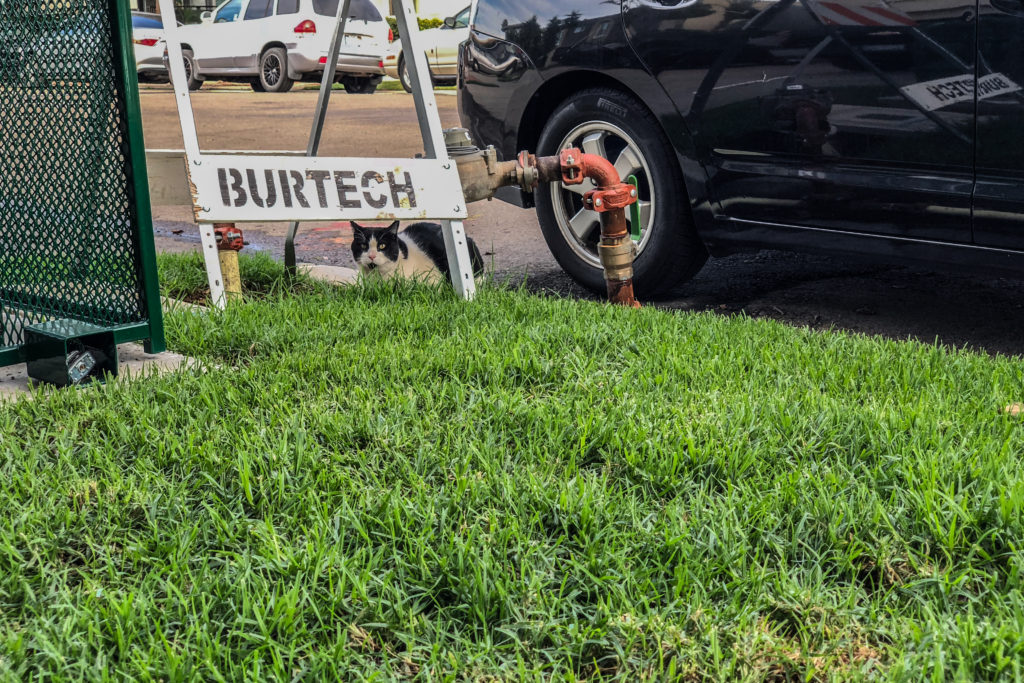 Construction crews return to ripping up our street—so they can place new water (and possibly sewage) pipes—following a three-day break (for the weekend and Martin Luther King Jr. holiday). During December, the contracted company worked on Louisiana, which is where I met this fine feline, on Jan. 14, 2018, appropriately cowering behind one of the many, remaining Burtech signs.

But I am fairly sure we had a near encounter the previous evening. Returning home with Pizza Hut pie, driving up Monroe from Texas Street, I passed a Tuxedo-like kitty, with massive white ruff, sitting upright, beyond a parked car, slightly in the roadway, across from Louisiana. I watch my speed in the neighborhood for a reason: kids and cats. My wife got an earful about the strange sighting while enjoying a mouthful of cheesy crust, zesty tomato sauce, and bountiful toppings (Super Supreme without black olives, baby).

I used iPhone X to shoot the Featured Image and the second render. Dissatisfied with the Apple Photos processed pic, I exported the original HEIF (High Efficiency Image File Format) capture for processing with Adobe Lightroom Classic CC. Uh-oh, HEIF isn’t supported, so from MacOS Finder I converted to TIFF. 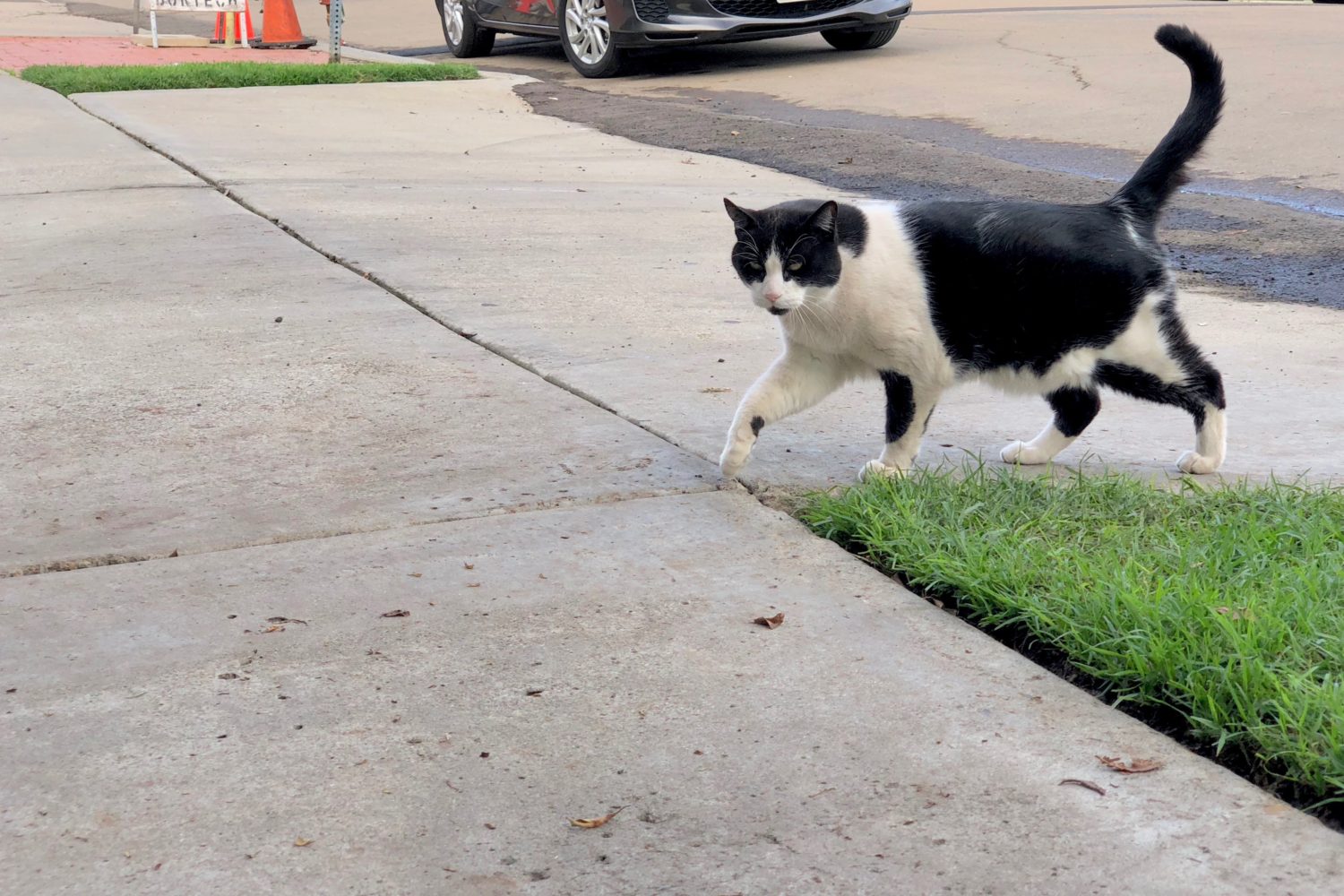 The second portrait’s composition is a compromise, so that a car’s license plate is obscured. Vitals are same except for shutter speed: 1/163 sec. 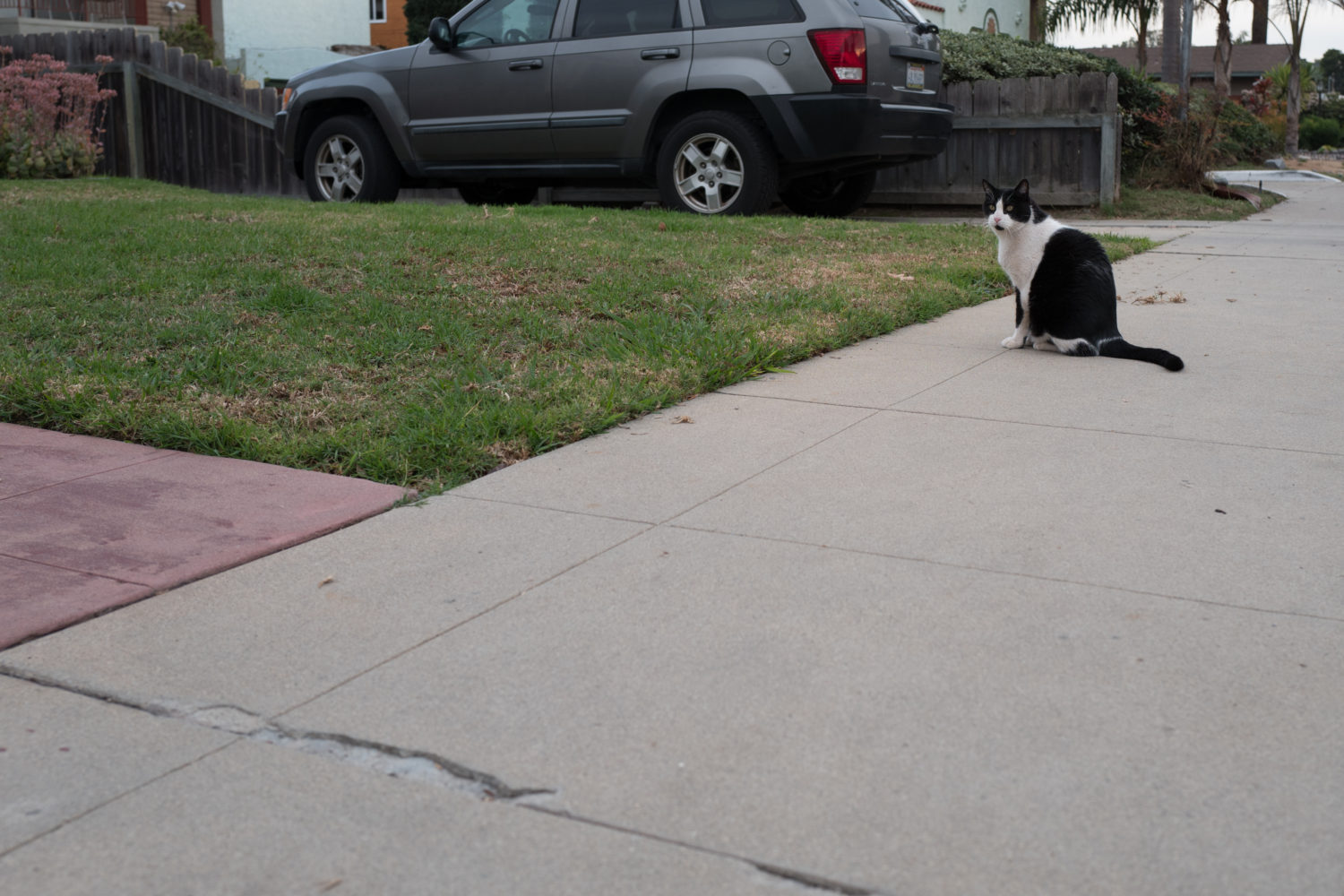 Yesterday afternoon, while walking along Louisiana, I again met the kitty but on the other side of the street. This time I had Leica Q handy. Vitals, aperture and shutter speed manually set: f/4, ISO 200, 1/125 sec, 28mm; 4:34 p.m.

I nickname him Boss, because of our first meeting by the sign—sitting there like foreman of the road crew—and for moving about like he owns the street. It’s his territory. He is boss cat.

Update, March 5, 2020: I learned from the owner that the real name is Milo, and that he passed away earlier this year from pneumonia. Milo was 16 years old. His housemate is, or was, Huck.