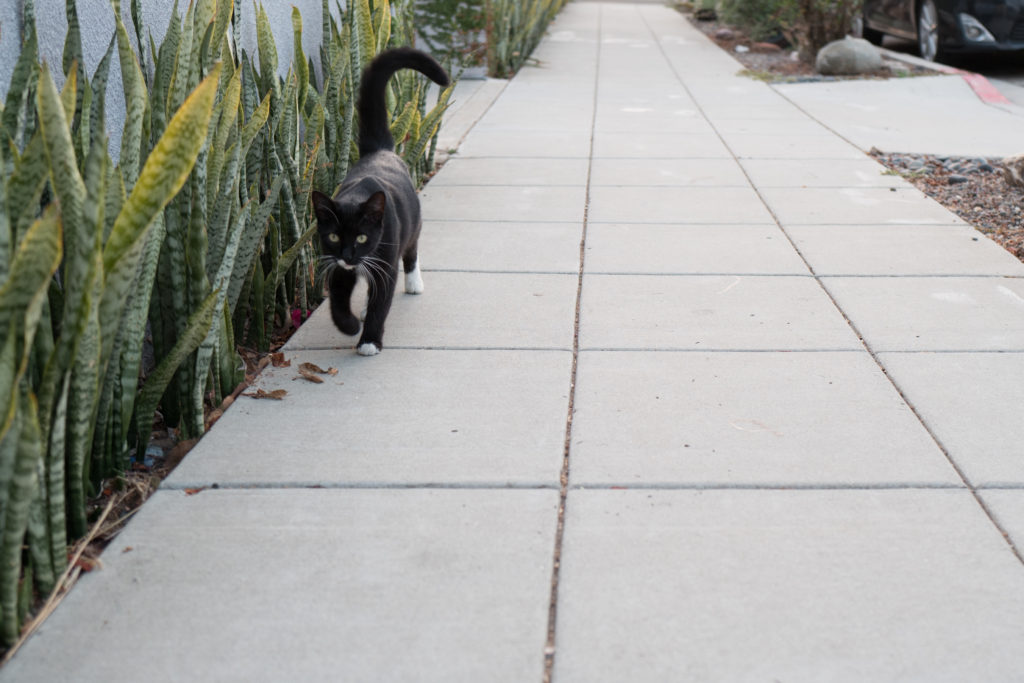 Texas Street, which leads down into Mission Valley, demarcates one of my neighborhood’s major borders. A few homes back from the throughway, as I walked to Pizza Hut along Meade, a pretty tuxedo kitty greeted me on Oct. 2, 2017. She was so friendly that getting good portraits was next to impossible. Hence the odd selection presented.

We visited for a few minutes before I crossed Texas and started strutting up the steep incline beyond. Then I changed my mind and aborted plans to fetch a $6 three-topping medium pie special. I walked back towards the furball, who had remained on the sidewalk. 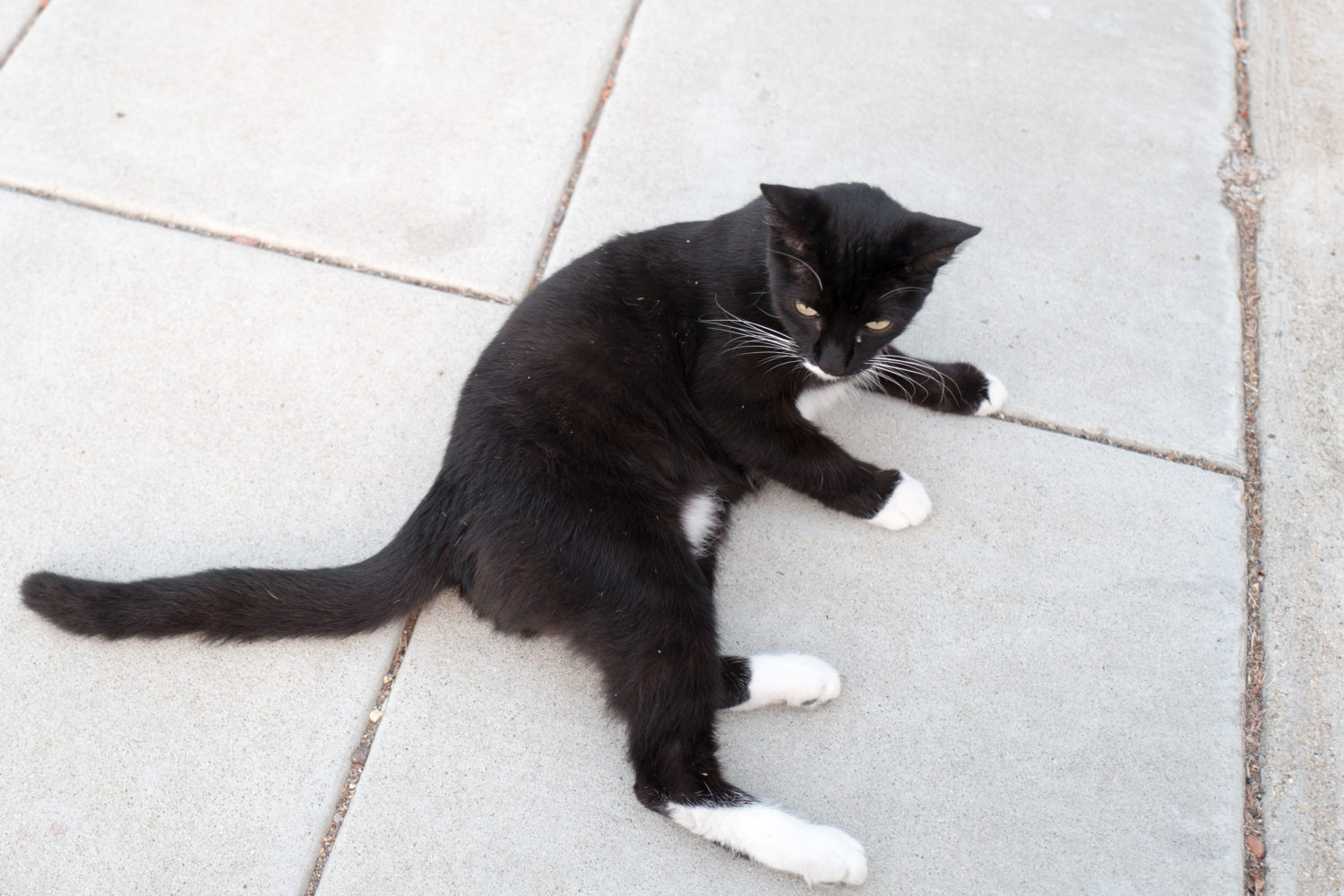 Not long later, a neighbor approached carrying what looked to me like an adorable mixed-breed Chihuahua, whom she called Stomper. The woman also told me that the cat’s name is Mittens.

The tuxedo is tenth to appear in this series. The others: Fraidy, Jellicle, Nine, Patience, Pepe, Poser, Sammy, Spot, and Tux. Initially, I passed by, thinking she was the one nicknamed Jellicle, whom I had recently seen close to Texas but on a parallel street. A quick photo comparison proved that presumption to be mistaken. 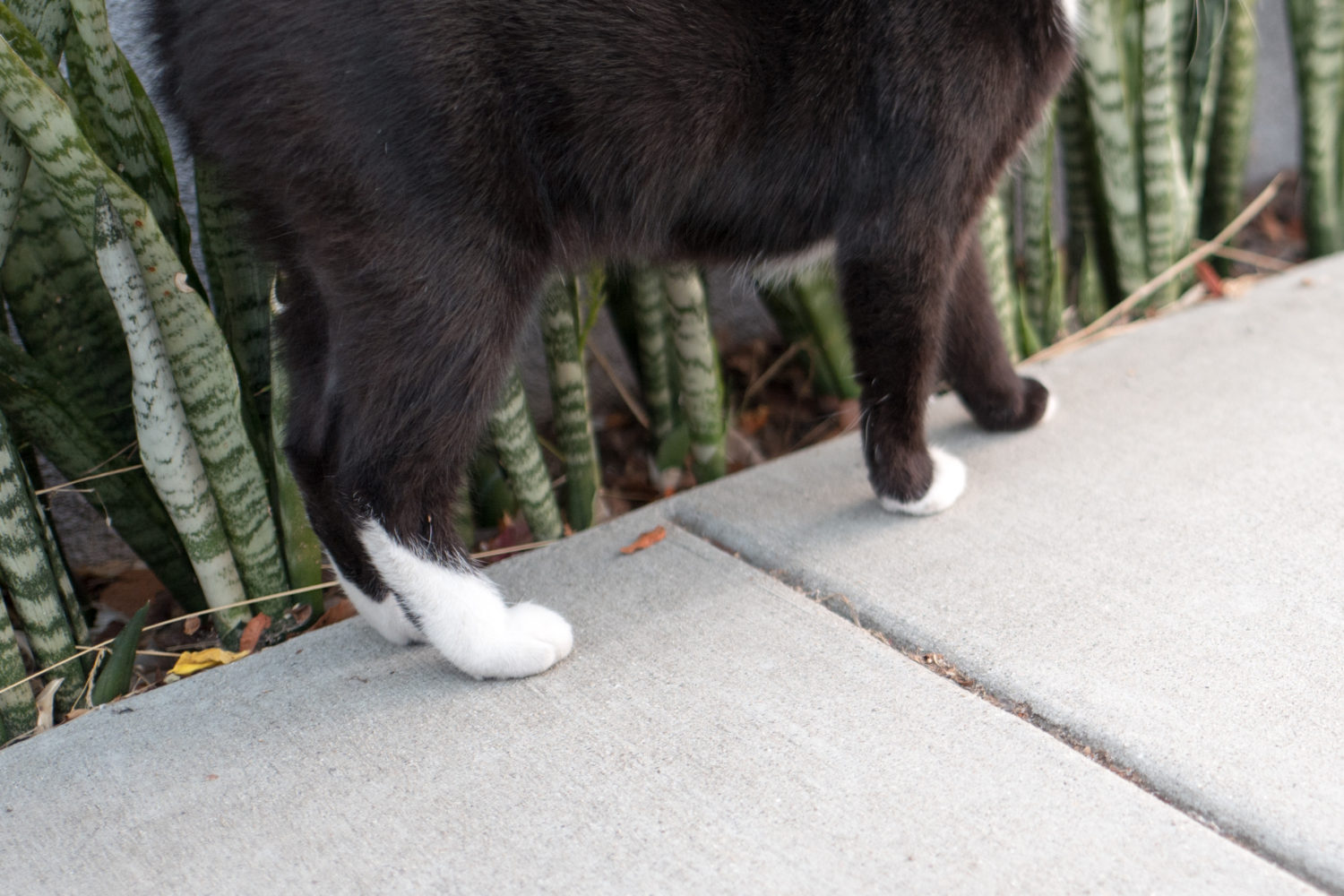 I captured the Featured Image—and its companions—using Leica Q about five minutes before sunset. Vitals for the main photo: f/2.5, ISO 100, 1/125 sec, 28mm; 6:25 p.m. PDT. The next two, shot one minute later, are same except for aperture, which is f/2.8 and f/1.8, respectively. Shutter speed was manually set for all three images, which have been cropped and tweaked—in Adobe Photoshop Lightroom from DNG RAWs, then converted to JPEGs.

Chatting with the lady holding Stomper broke the petting and attention-getting rhythm that Mittens received. The cat casually strolled back beyond a gate and into her driveway. With her safely out of the heavy traffic harms way, time to leave had come. Turning Westerly, I commiserated with the dusk descending around me and walked home.