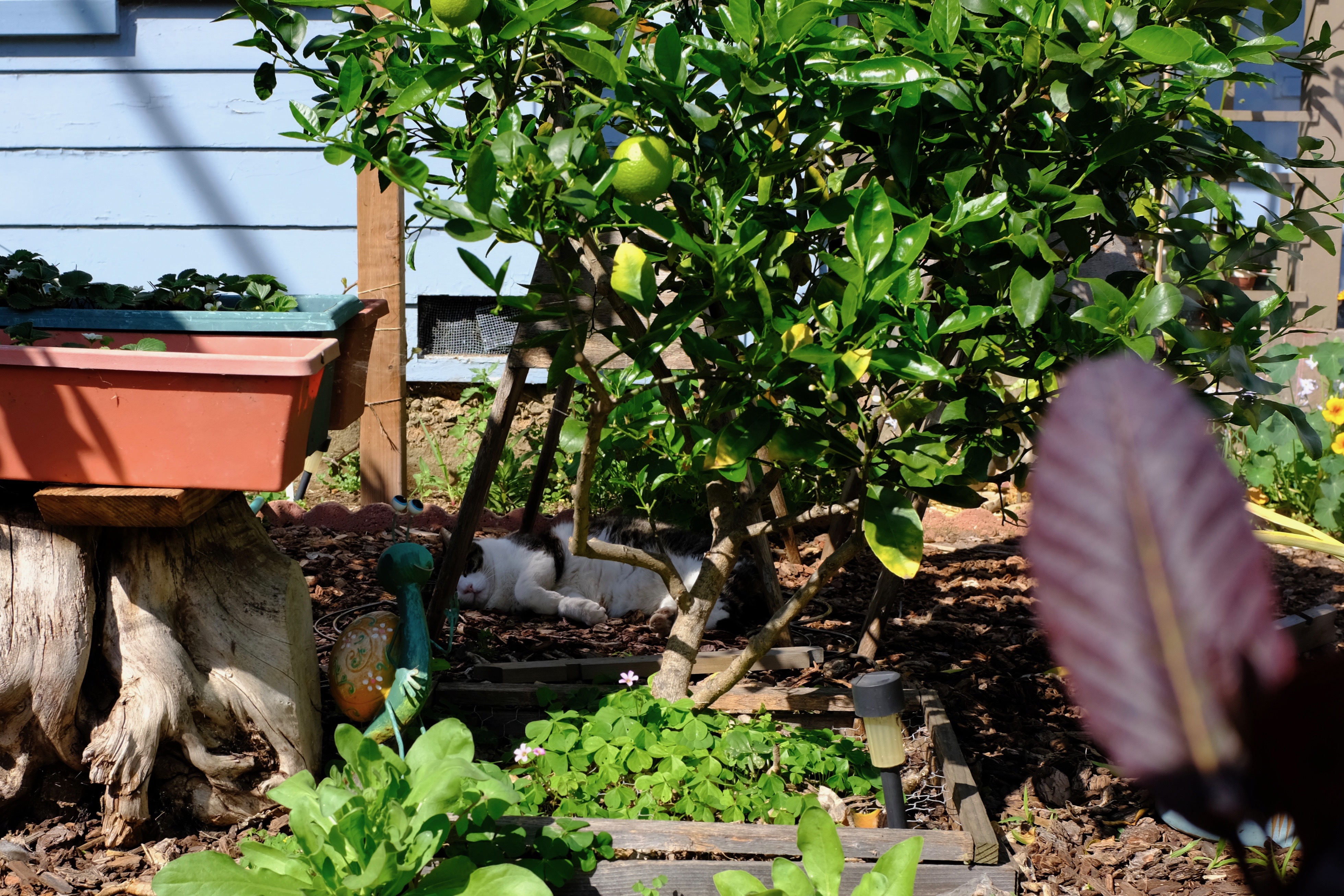 This morning, my wife and I jaunted down Maryland Ave., on our way to The Hub for groceries. Nearly to the Washington Street bridge, in a yard with “Wildlife Habitat” sign, and lush foliage, Anne spotted a furball belly up. I shot several back-to portraits, using the Fujifilm X100F. When we returned, the feline had flipped around my way. 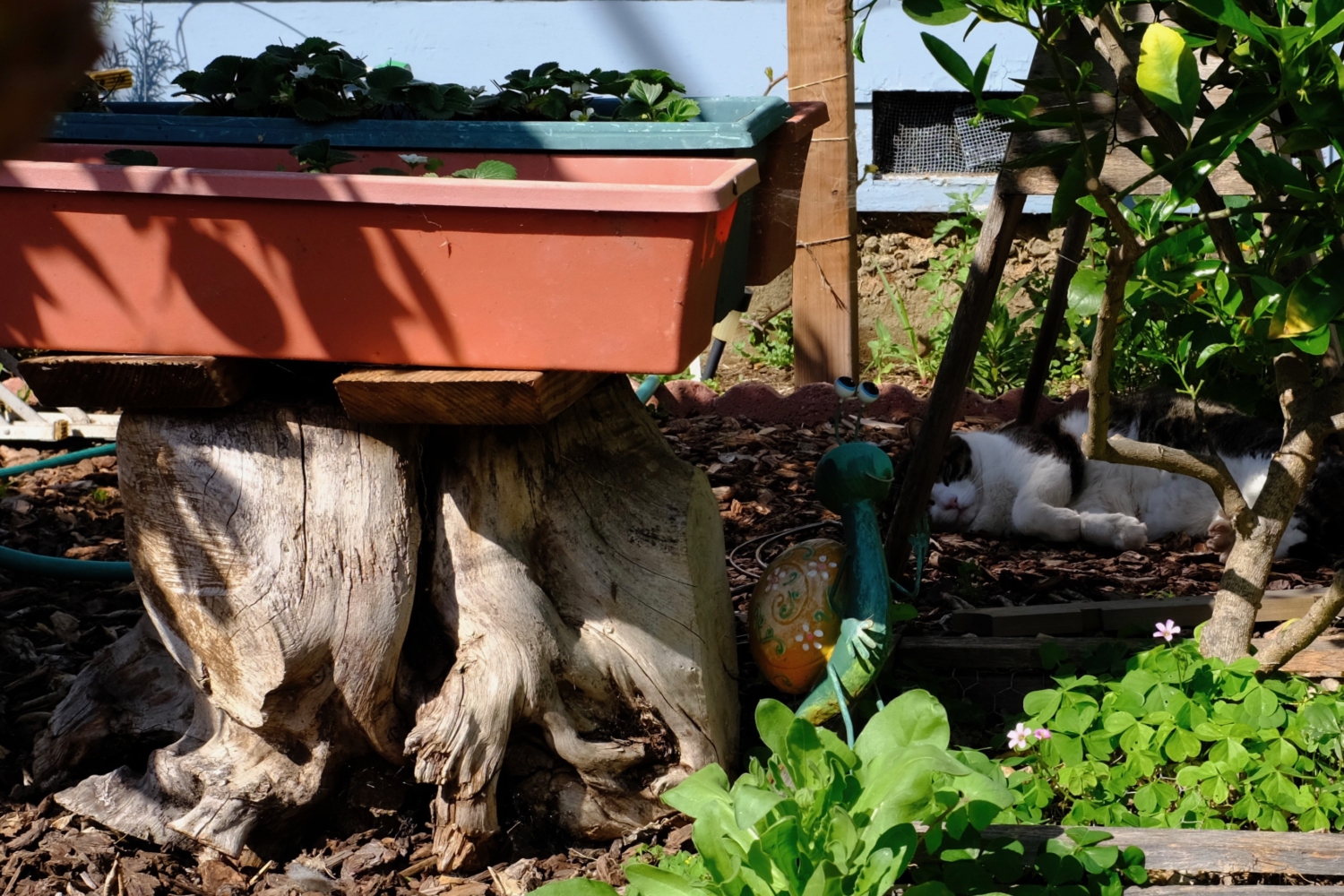 I added the third pic on March 18th, when Annie and I spotted Sebastian (his real name) in the same yard. The kitty slowly came over for pats. Got to say that Velvia really brings out the lush colors as they should be. This Spring is like none other I have seen in San Diego, following an unusually wet Winter. Vitals: f/5.6, ISO 200, 1/90 sec, 23mm; 4:30 p.m. PDT. 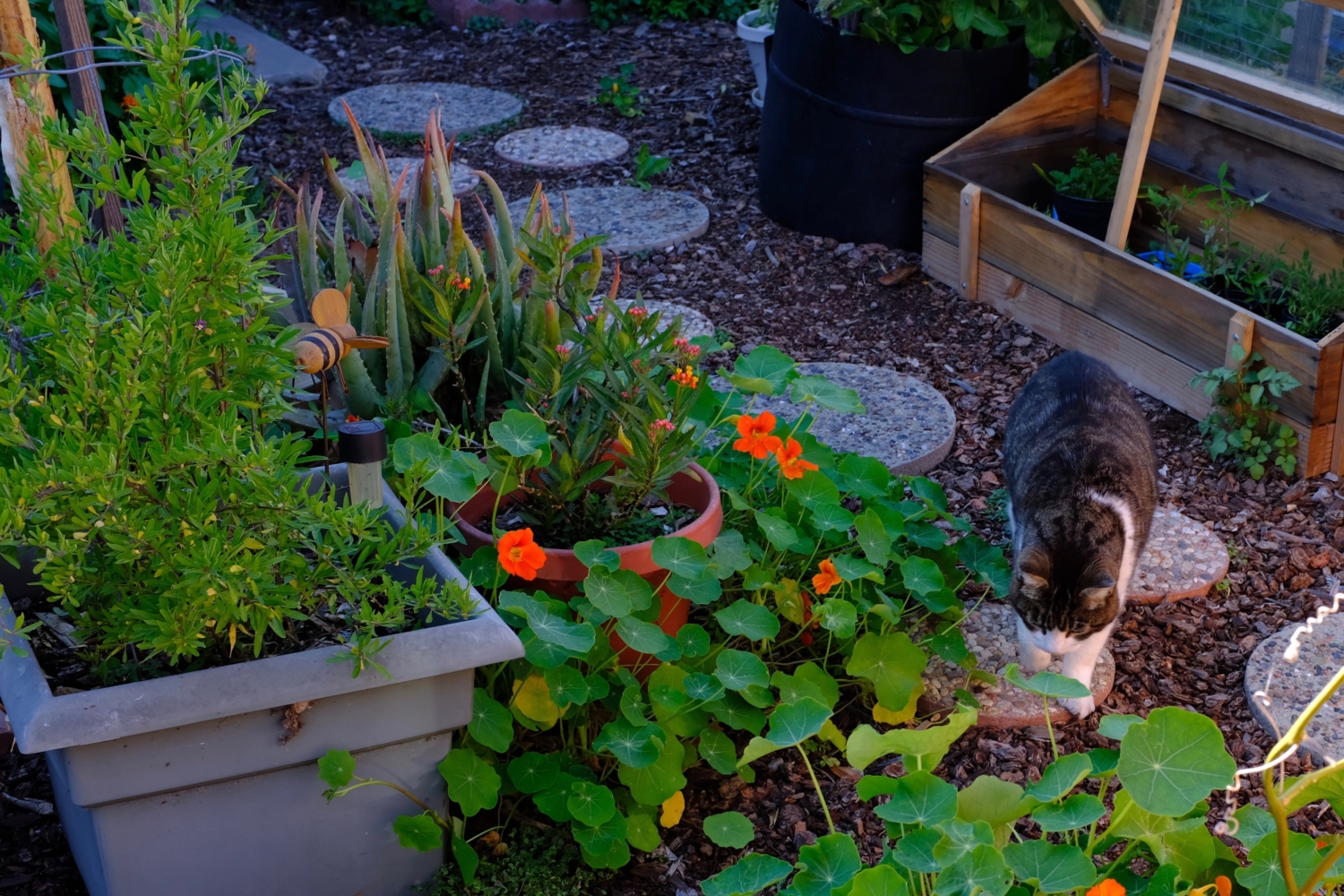 The final photo, captured three minutes later, is the keeper, despite slight motion blur. Vitals: f/5.6, ISO 200, 1/60 sec, 23mm. Aperture was manually set for both images. His owner says that Sebastian is about 7 years old. 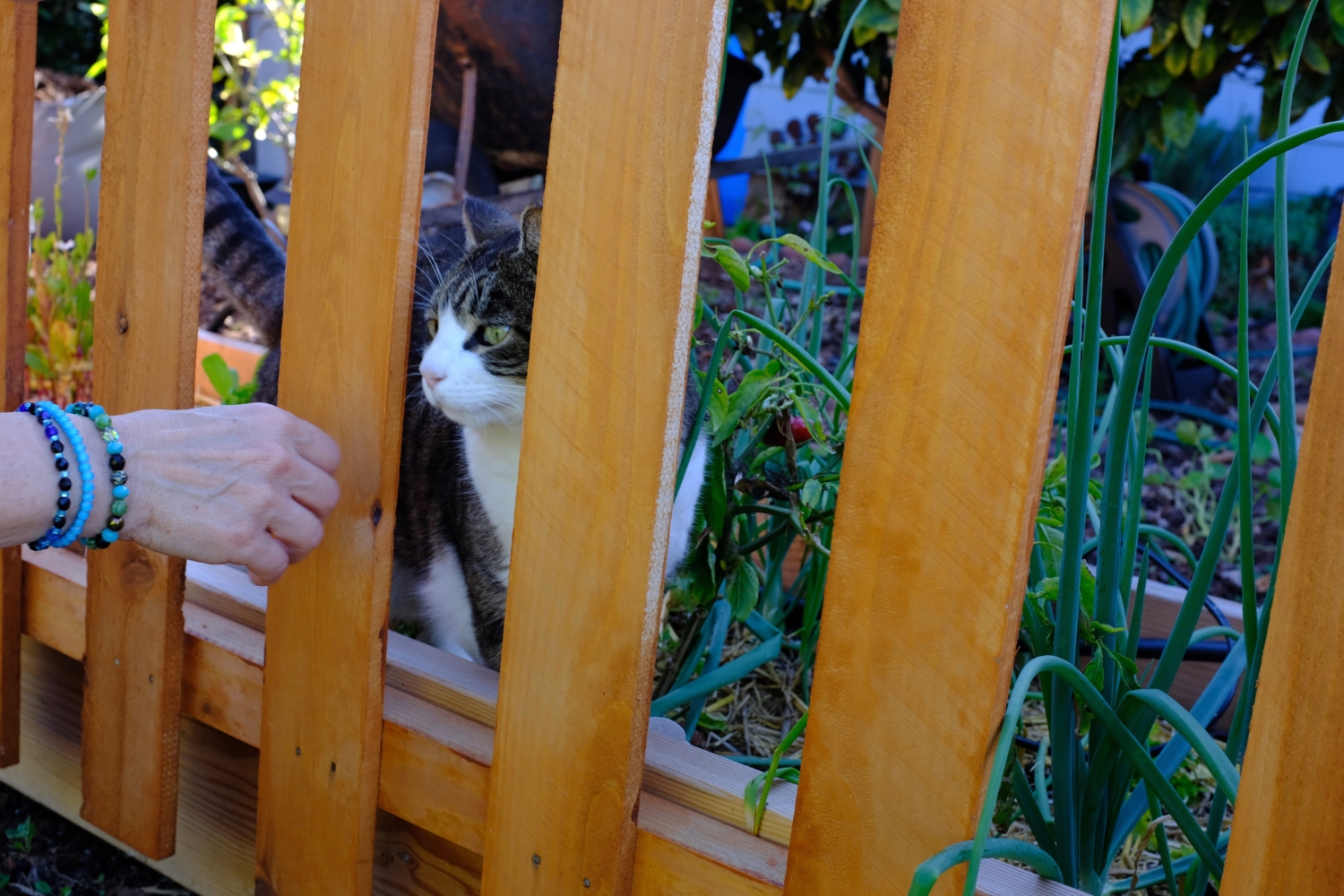 Update, Nov. 24, 2022: While walking in University Heights West, I passed an extremely faded poster stating that Sebastian is missing; a yard camera puts his last sighting at around 2:30 a.m. PDT on October 29. Based on a Nextdoor comment about an animal that had been run over, Annie confirmed that the owners still search for him (and that he wasn’t the kitty killed by the car).

The additional photo is the last that I stopped to take of him—almost a year earlier to the day: Oct. 25, 2021. Vitals: f/5.6, ISO 100, 1/100 sec, 28mm; 10:45 a.m.; Leica Q2. I should shoot portraits anytime I see one of the previously profiled putty-tats, because coyote sightings are rampant and there is a sadly corresponding increase in lost cats and some dogs. 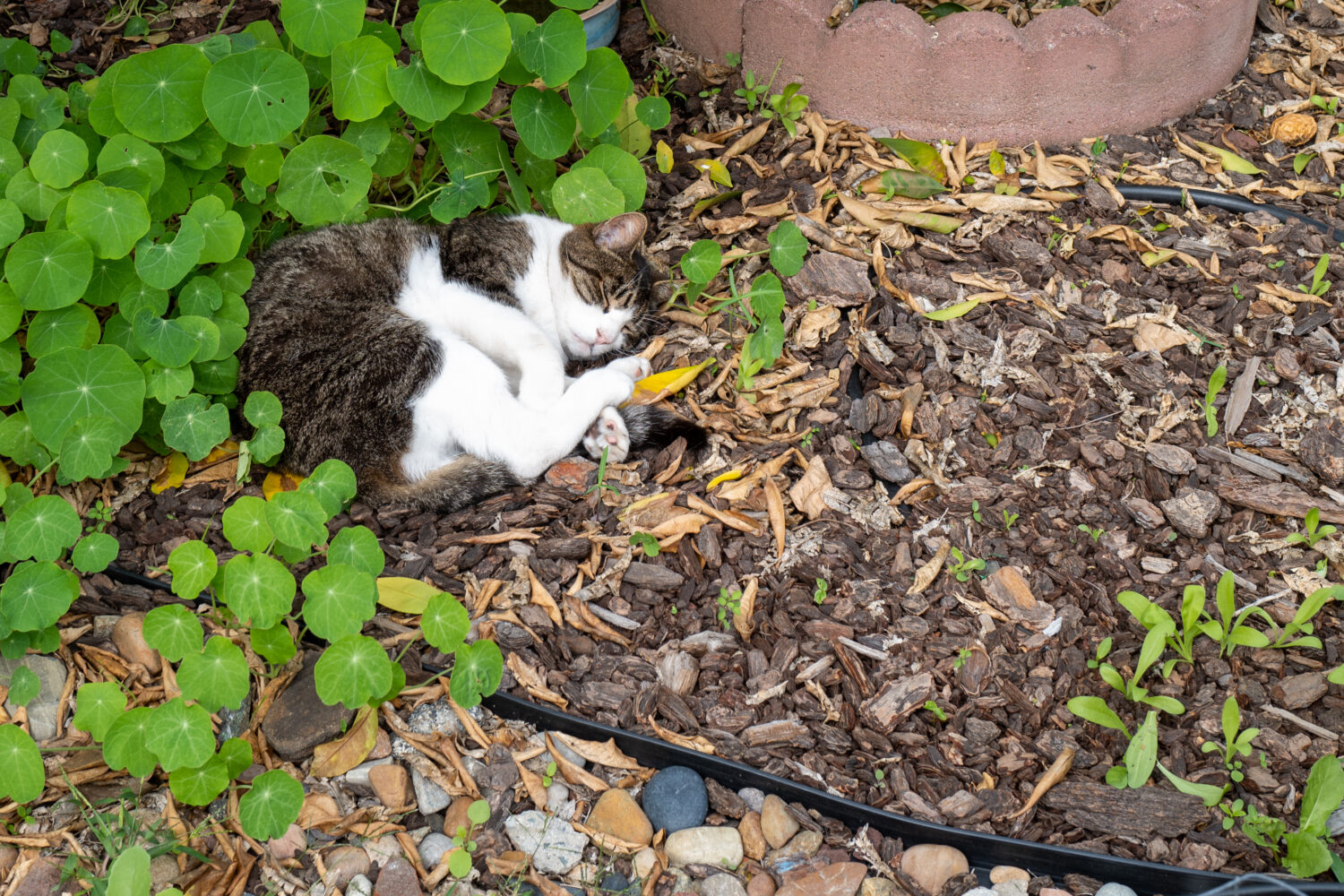