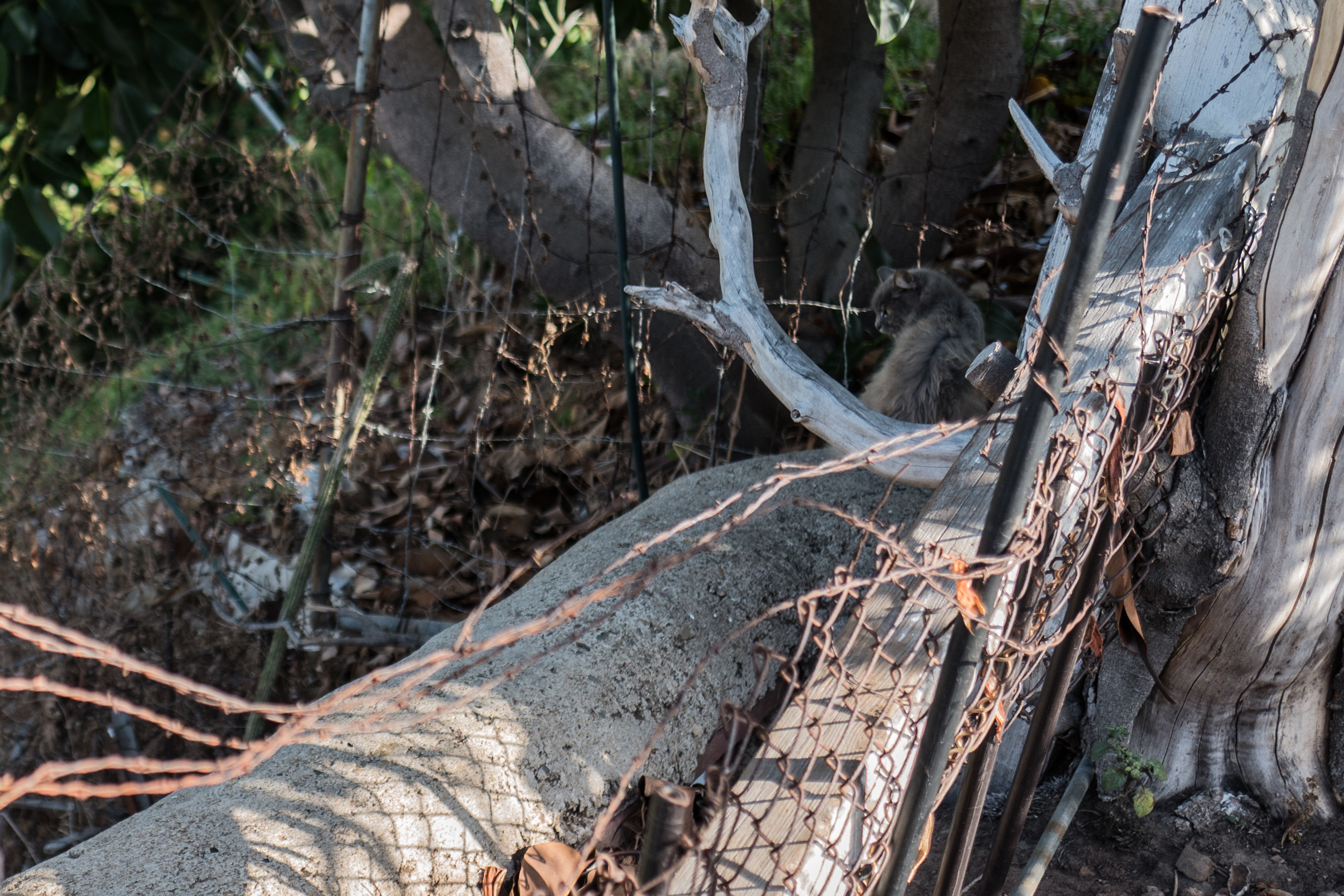 The Leica Q has one of the best autofocus systems of any digital camera that I have used (and the list’s long). But when there’s failure, the scale is grand—as was the case yesterday morning where Adams Ave. ends at the overlook adjacent to Golden Gate. I hadn’t planned to stop there, but beyond the automobile guardrail and wire fence, I saw the clear shape of a cat sitting back to me. That put him on the canyon side, which would be a treacherous place from where a human could fall. He contently watched wildlife, mainly birds, with little care about me—although he moved away some when I approached to the side for better sight to shoot. The feline could have been looking out onto the Grand Canyon, for the scale set before him.

The kitty is blurry in every one of the seven shots, even the three where I manually focused. The auto-system stopped at the fence. I did only marginally better for the last capture, before the cat sauntered off. Problem: While only 8:31 a.m. PDT, the sun seared fiercely ahead of a heat wave, compelling me to wear sunglasses that make the electronic viewfinder’s visual focus cues difficult to make out when rushed—as I was. I fumbled to safely put down the protective eyewear, as the beastie waddled off; having stepped partly over the guardrail for better vantage point,  I could have carelessly let the glasses fall away. 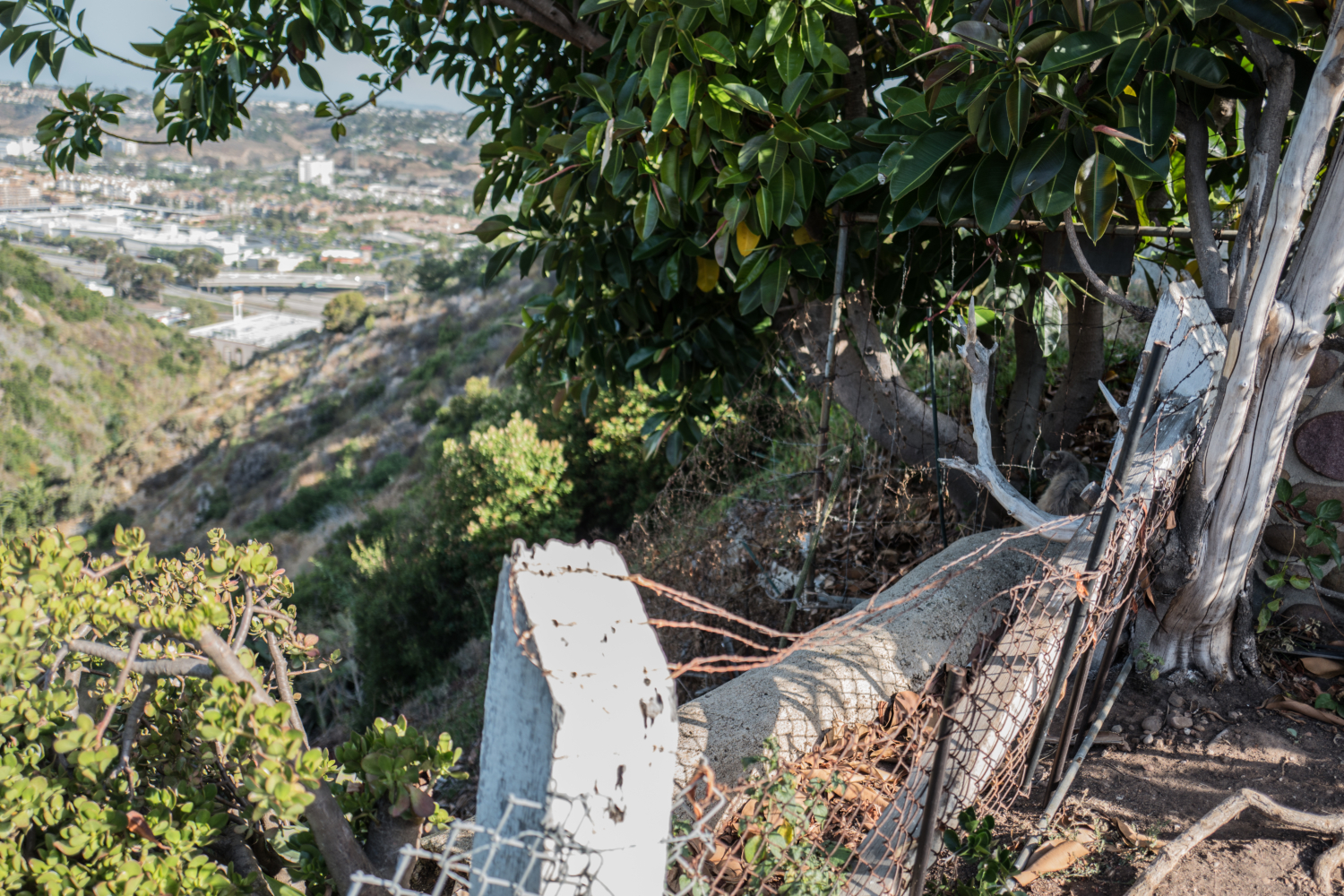 The Featured Image is a crop of the original directly above. I aggressively edited the RAW DNG in Adobe Photoshop Lightroom before exporting to JPEG. For example, I pulled back Highlights and Whites to boost detail of objects on the horizon. I discarded one revision that upped the exposure, deciding that the animal presents better darker, given he is just beyond the focal plane and looks blurrier lighter. While this series has accumulated more than 80 cats since starting in October 2016, the number would be higher if not for portraits I felt compelled to discard. This one is marginal, and I tinkered with it for some time before giving a pass—more because of the unusual setting than anything else.

Vitals: f/1.7, ISO 100, 1/1000 sec, 28mm. Ah ha! So there’s the problem and something about this camera that I don’t understand. I had manually set the aperture to f/5.6 before going out yesterday morning, and I shot expecting greater depth of field that would have put the furball in the focal plane for at least the last portrait. Okay, it’s time to look over the user manual. 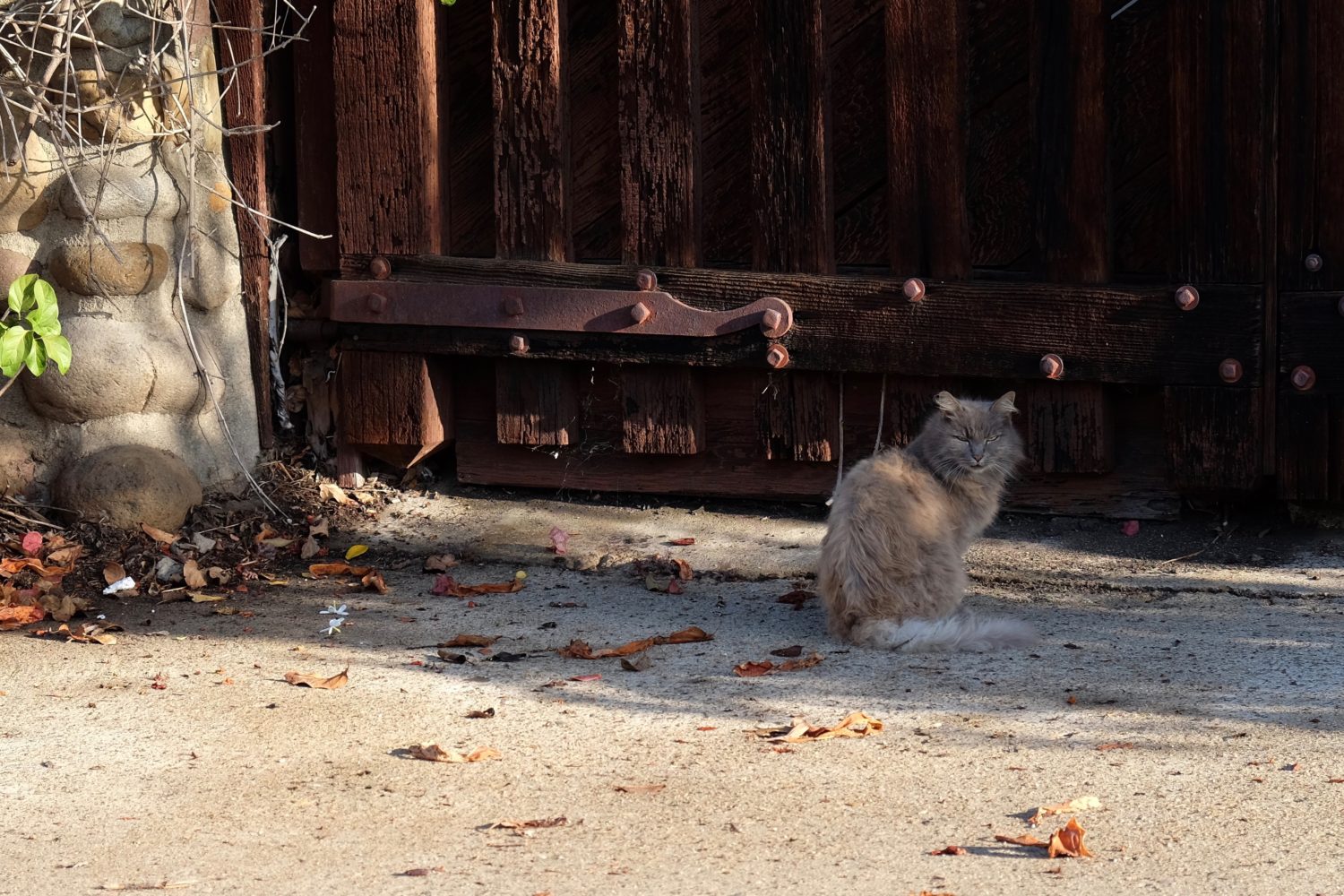 Update: In December 2017, while looking over my photo archive, I made an unexpected discovery. I had shot a portrait of the cat during the month that this series started. The longhair sits in front of the garage that strattles the canyon and where he sauntered following the July 2017 sighting.

I cropped and edited the pic but for some unfathomable reason did not previously publish. I clearly remember shooting this portrait, using Fujifilm X-T1 with XF18-55mm F2.8-4 R LM OIS and several accompanying ones. The kitty hung in the shadows while I looked into glarling sunlight, which mostly washed out the EVF (electronic viewfinder). Vitals: f/5.6, ISO 200, 1/160 sec, 55mm; Sept. 19, 2016, 7:54 a.m. PDT.

Update, April 11, 2018, I met a lady living along the overlook who, among other neighbors, put out food for the feral stray. Real name: Shadow. The kitty started looking ragged about eight months earlier, and there was debate about someone trapping the animal and taking it to the vet. Neighbors decided the furball would be worse off intervening. Shadow disappeared about two months ago and is presumed dead from old age. The cat lived in the area for a stunning 18 years.