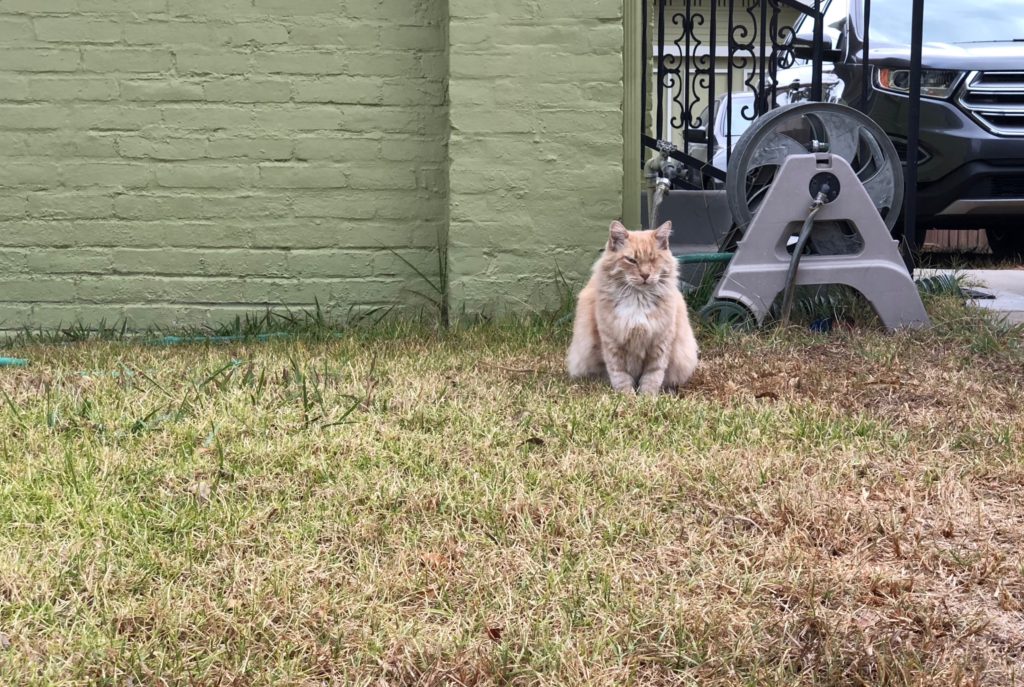 After days of sun and unseasonably mild (and dry) weather, clouds blanket San Diego this morning. Overcast skies are excellent photography weather, and I just had to take a cat walk (accompanied by my beautiful wife). Along Georgia Street, between Adams and Madison, Anne spotted a fluffly ginger-light—tan, if you ask me—rolling around a lawn. Just then, the owner parked his vehicle, and by the looks of dress and carry-alls, he had returned from the gym.

He told us about Reddy—a one-eyed, 10 year-old male without a tail. The family found him as a kitten, with apparent injury that later required his tail to be amputated. Reddy lost his eye years later, when wearing a collar. Something caught on a fence—and, well, let’s spare the gruesome details. But suffice to say he notched the second of two lives, and, you know, he can’t afford to lose any more body parts.

What to a human might mean handicap is little consequence to Reddy, who, even in elder years, is lively and active. Like many cats on the East side of Park Blvd.—and sufficient distance from coyote canyons—Reddy is an indoor-outdoor roamer, who shares residence with a bountifully-furred calico. We saw her looking out the porch window (smoked glass prevented my capturing a portrait). 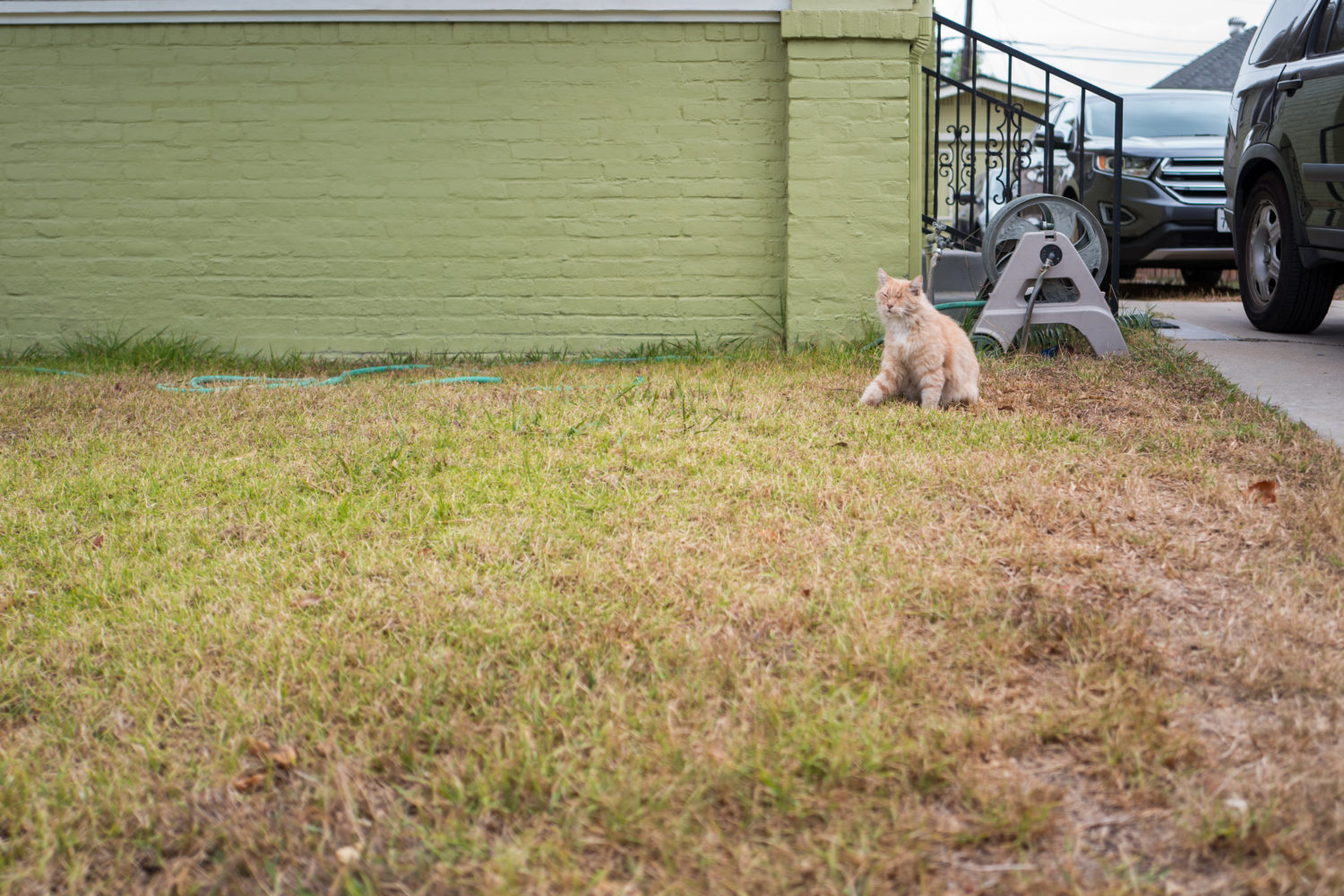 I carried along Leica Q and iPhone X, but the real camera’s photos were a wee bit over-exposed. The aperture was too wide for the preset shutter speed. But I shoot RAW, and Adobe Lightroom Classic CC auto-adjusted nicely, followed by my contrast tweaks. The X did a tremendous job accurately capturing color and contrast, but with a bit of punctuated vibrancy.

I used the smartphone’s second lens to 2X zoom for the Featured Image. Vitals: f/2.4, ISO 20, 1/60 sec, .97 ev, 6mm; 9:07 a.m. PST. This photo does Reddy diservice. He spent most of his time rolling around the grass, presenting few good poses for portrait. He looks frumpy and grumpy, and the furball is neither. I chose this one, so that you could see his face (and where an eye is missing). 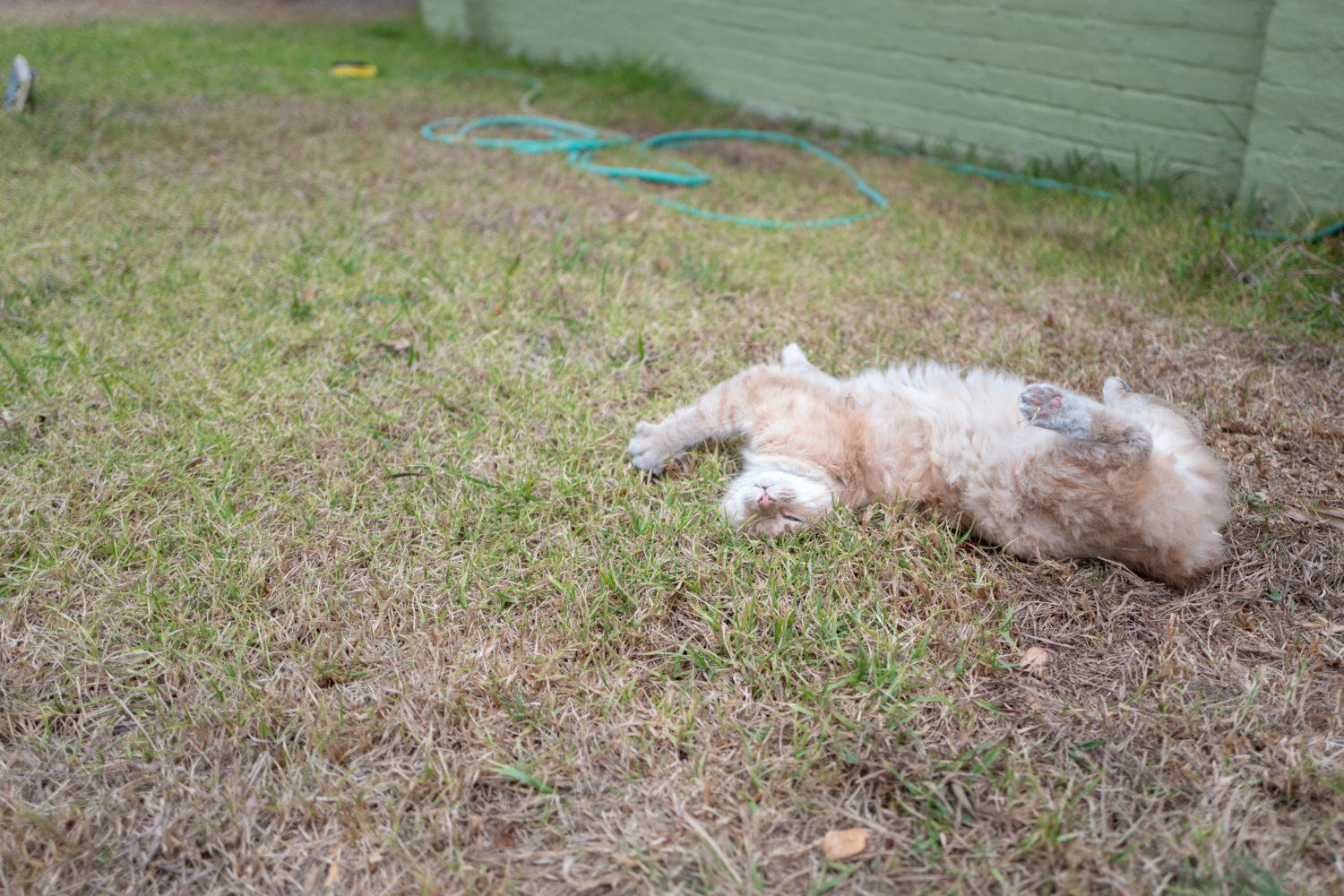 Update July 25, 2019: Thirteen days ago, I spotted a kitty that looked like Reddy on a house’s door steps, but across Madison going towards Monroe. I couldn’t see whether or not an eye was missing, because his head was turned away. On the Nineteenth, my wife walked by the place, where was Reddy and two other cats—all regarding one another in the territorial fashion common among the species.

Reddy has a new home, and a new name! For reasons unknown, the 12 year-old feline abandoned his family and adopted another. The woman looking after Reddy, whom she calls Jinx (yes, she knows his real name), says that his former caretakers come by occasionally to visit him.

Reddy/Jinx already had a reputation for being a roamer, but I wonder why he left the people who raised him from kittenhood. Last week, I saw the Calico with whom he shared residence in his former yard; perhaps there was some territorial struggle between them. Maybe he was attracted to the cat convention down the street or kindness of the woman caring for the beasties. She says he meows outside her door in the morning for his daily dash of whipped cream. Could that be explanation enough?