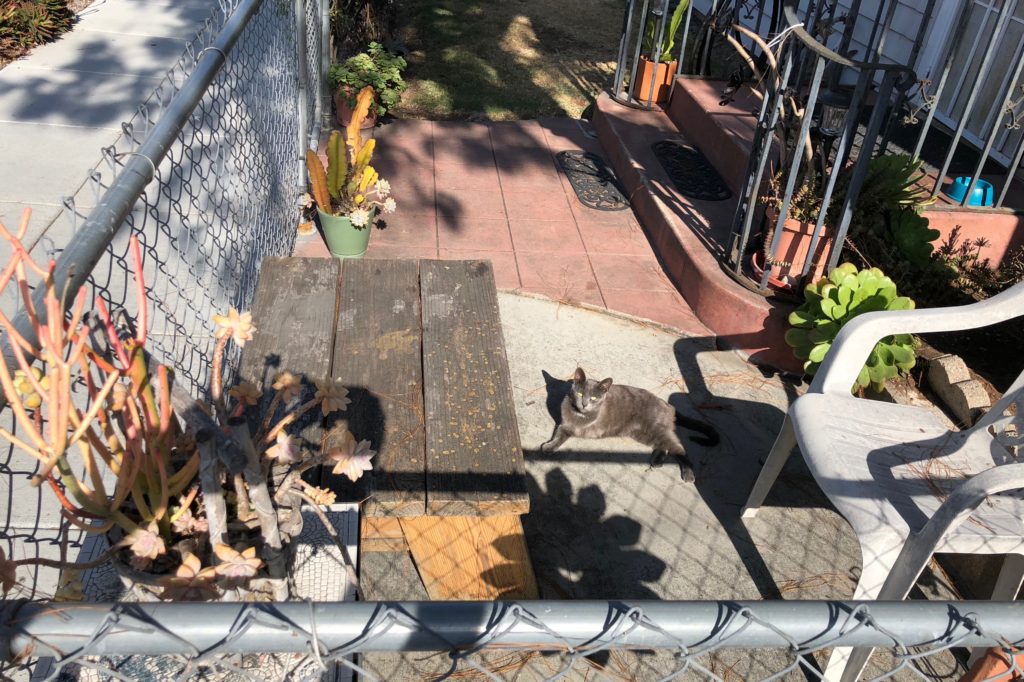 Here’s the continuation of an unexpected story. In late January 2018, I met Lola, as her owner returned home with groceries. When the cat came outdoors, she spooked another kitty that neither of us humans had seen. The little grey returned, continuing to do so over the months since—or so I would learn.

Walking to my daughter’s apartment today, I observed that same frisky feline sitting in Lola’s yard. I snapped the Featured Image, using iPhone X, at 8:43 a.m. PDT, along Polk approaching Park. Late afternoon, when returning home, I saw Lola’s caretaker working in the yard and asked about the visitor.

She described the growing kitten as “feral” and asked if I noticed that she only had three legs. I didn’t, but after further inspecting the four photos taken I see that her left forward limb is missing. The kind woman, who started feeding the kitty, believes the animal was born that way. By the way, she is the third three-legged cat to appear in the series. Amble and Mini are the others.

Over the past several months, the kitten, now named Smokie, returned to the yard for food and territorial residence. Occasional hand-feeding eventually led to tolerated touches and eventual pats. “That was the first time a cat drooled on me”, she says, explaining she learned that such response is sign of happiness—and she believes that Smokie had never before been petted. (FYI: Smokie is my spelling because we previously profiled another Smokey, who is male.)

She sometimes brings Smokie indoors, like last night because of cat fights in the street. Reluctant at first, Lola accepts Smokie, which makes the overnight stays easier. But there is another objective, preluding something dreaded. The owner wants to take the grey beauty to the vet soon, to be neutered and vaccinated but worries the animal won’t easily forgive being caged. It’s probably a legitimate concern that the relationship success could be set back being she’s a feral.

That said, the woman also understands that the risk of pregnancy grows the longer Smokie stays outside, which is the kitty’s preference. She thinks that the female might be in heat and that her scent draws males, who fight nearby.

BTW, the cat’s new human mom praises how amble and able she is. There is concern, too. “The other day Smokie brought me a little bird”. Yikes! How does a three-legged hunter do that?