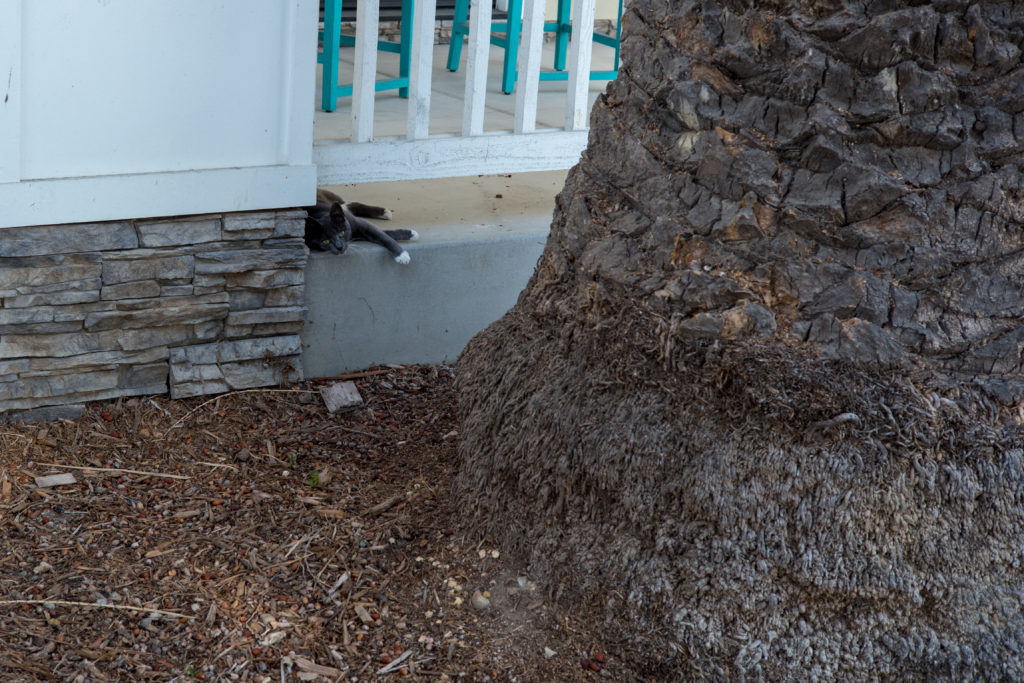 The twenty-fifth Alabama Street cat might not be around much longer, so I rush her profile past others planned to post sooner. One neighbor on the block between Adams and Madison posted about the kitty on July 26, 2018, wondering who she might belong to. Followup on August 3: “Looks like she will be having babies really soon. Friendly but definitely seems weary of people”. I presume the author meant wary, making a common confusion between the words. If expecting—or recently losing—a litter, she might very well be “weary of people”; hence the nickname.

Today, there is quite a bit of banter back and forth among neighbors on the Nextdoor social network about trapping Weary and taking her to the local animal shelter. Her time in the neighborhood ends soon, methinks. Although, as I post, she hasn’t given up her status as an Alabama cat. I am still clueless about why there are so many felines on the street compared to others in University Heights.

Trapping may not be the best solution. Given the month just turned over, new residents could have moved in, with their kitty. I got to thinking about that scenario after the kind neighbor looking after her posted comment on Nextdoor: “She’s def not feral, but seems like she was left. She still likes attention from people, but def skittish. Seems as though she had human contact before, but was maybe left behind”. I replied:

How long has she been hanging around? Abandonment is one possibility if near the end of the month, when people move. But she also might have owners close by to you. If she’s friendly, but a little shy, she easily could belong to someone on your street or on Mississippi behind you. If she’s young, maybe they waited too long for her to be spayed before she got pregnant. Maybe she’s too immature to have a litter that can survive. My point: If she’s not lost, and she has owners, they won’t be looking for her. And they might not be on Nextdoor to see your posting and the replies. Then there is the question I asked earlier: Is she obviously round and about often enough that you’re confident that she doesn’t have a litter somewhere—that would perish should she be trapped?

The picture of her on the porch is my house. She’s been hanging out in our backyard for a few months now. We call her ‘backyard’ (at that point I don’t think she was pregnant yet so we were unsure if she was male or female) and feed her whenever she’s around. She’ll come into the house for attention if the door is left open and will rub up against me if I’m outside in the yard. I’ve tried to trap her before because I would love to adopt her, we’ve grown quite fond of her over the last few months.

To which I replied: “If you’d like to adopt her, Maddy, I would act quickly before she’s trapped and taken away or she settles down to have kittens. Inside your place has got to be better for the kittens than outside in this heat. Good luck!”

Well, Backyard is no worse a name than Weary.