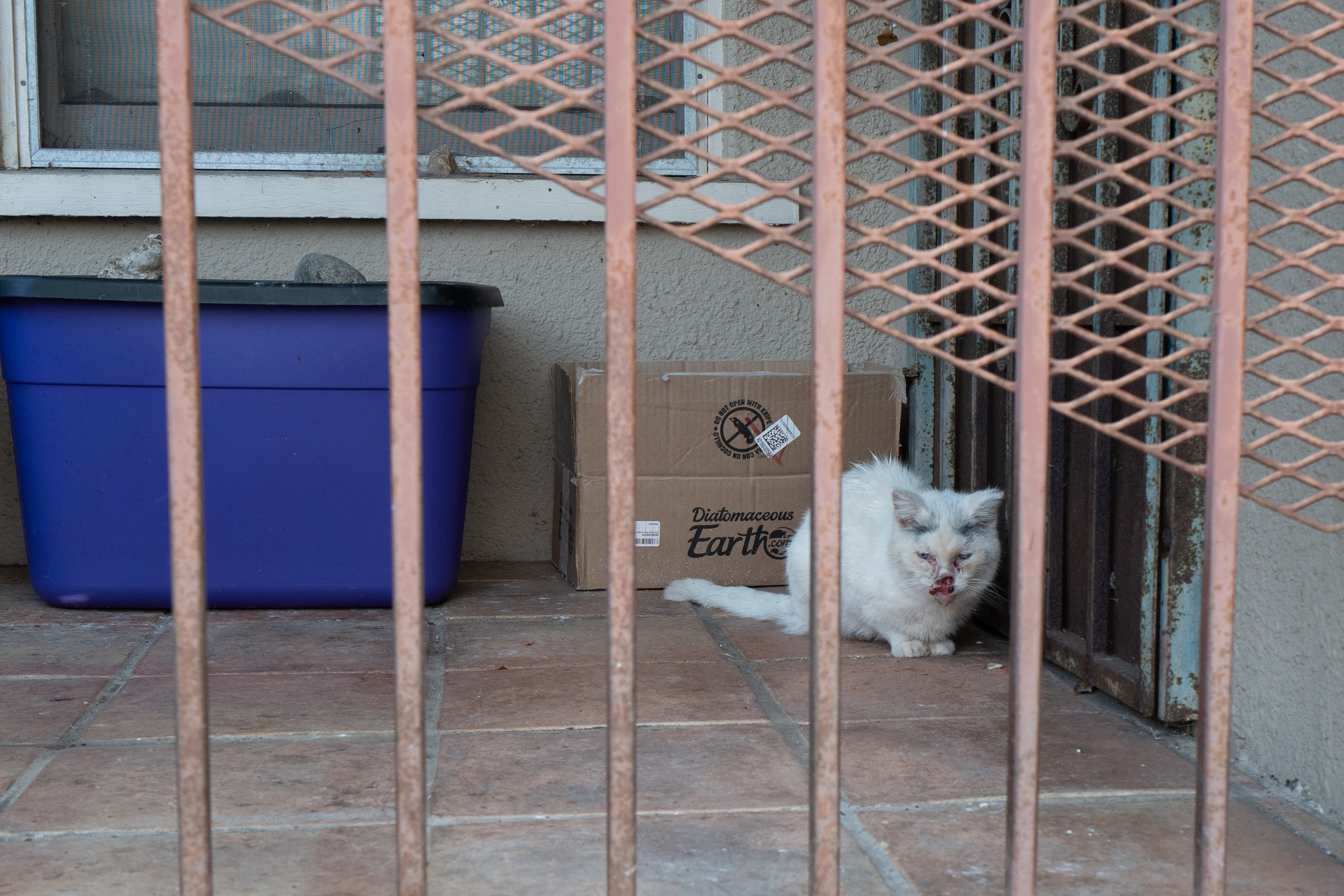 Some felines living around the neighborhood’s canyons have more than nine lives. Some survivors look like they have used them all but linger onward. Such is the case of Alfredo, a feral residing along the ravine at the Adams Ave. overlook—for an estimated 15 years. He was captured ages ago, neutered, and released. This afternoon, I encountered him for the first time since starting the series (two years ago this month) searching for food where E.T. usually eats. I snapped a dozen or so photos, using Leica Q, approaching closer and closer; someone occasionally spoke to the kitty as he meowed grovingly outside a security door.

The gent eventually came out with canned cat food, which despite hunger, Alfredo resisted. If you think the Featured Image portrays a sickly beast, you are right. Alfredo’s caretaker, who grew up in the house, believes the kitty has cancerous lesions around its nose and mouth—malady he has seen before among white furballs. The homeowner hopes to trap Alfredo. The technique is to put food inside the contraption that the cat can eat, then walk away. The food is pushed further inside each feeding until the cage door triggers. But he described Alfredo, no matter how famished, as “wily”—perhaps being cautious having been trapped and released as a youngster.

Alfredo’s prospects aren’t good, because of advanced age. That’s a decision for San Diego Humane Society to make, once the ailing animal is trapped: To treat, or to end his (presumed) suffering. He surely doesn’t look well, but resolve and vitality remain nevertheless. Alfredo’s caretaker is sympathetic and compassionate but wisely hesitant. Trapping a feral, even one accustomed to coming round for food, is a process of gaining (but in a way eventually violating) trust. He is urgent, too, because of the painful damage that likely will occur as the disease progresses.

Update, Nov. 1, 2018: I learned that Alfredo was successfully trapped a few weeks back and taken to an emergency animal clinic. Unsurprisingly, he was beyond treatment and edured considerable physical distress. The vet sedated the tough roamer, who was comforted for awhile before the clinic ended his suffering. Not many canyon/street cats live for 15 years. May he rest in peace.