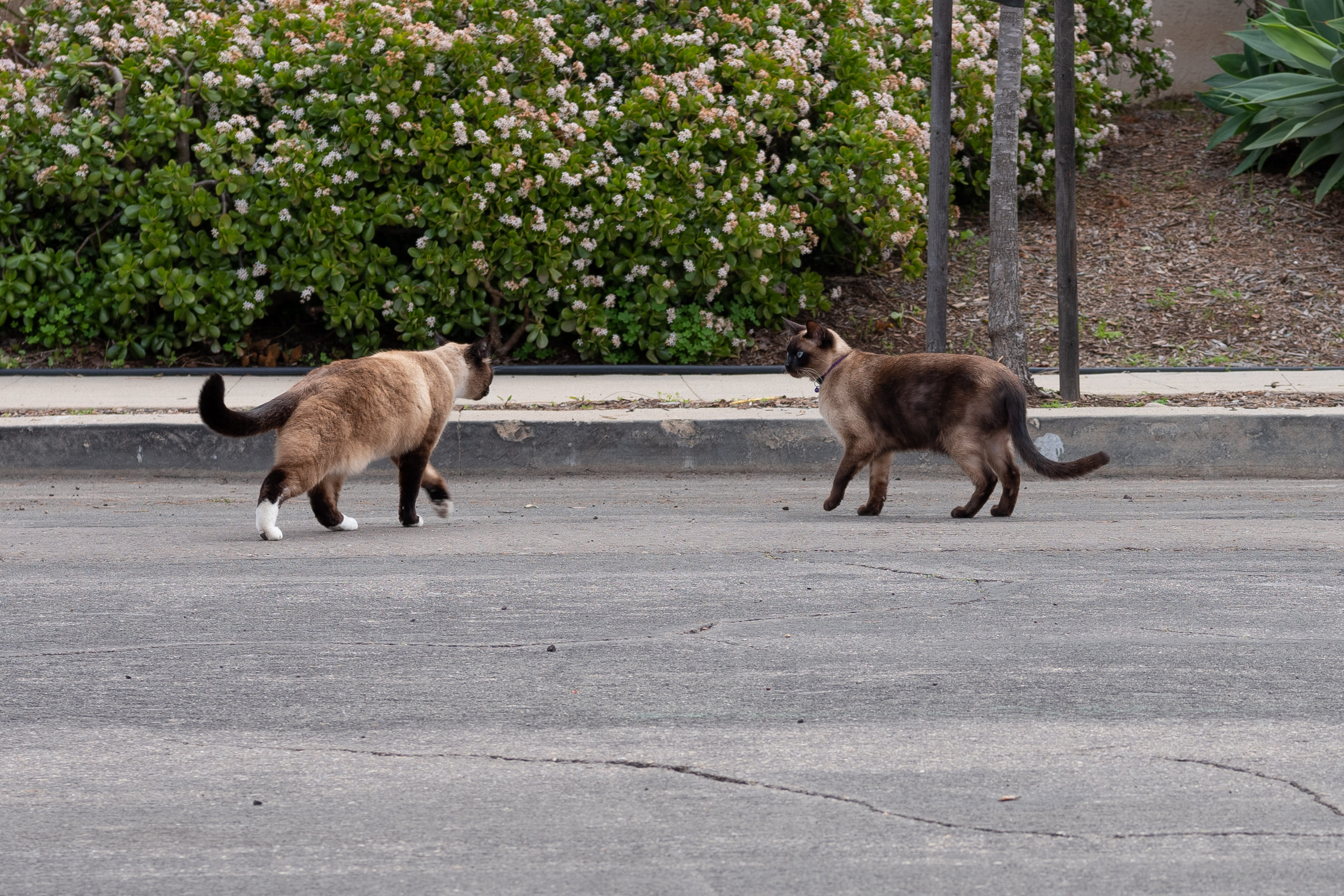 On Feb. 1, 2019, as I walked down Monroe where it hugs the canyon behind Maryland, a bonded pair presented on adjoining properties. I captured several portraits, using Leica Q, planning to return for closer-up shots. I would see the chunkier beastie again, doing its business in another yard—and, well, even felines deserve some dignity, if not their owners. No photo.

While preparing to add the Siamese Twins to the series, using the Leica Q portraits, FedEx delivered the Fujifilm GFX 50R camera and Fujinon GF63mmF2.8 R WR lens. I intended the medium-frame shooter to replace my departed full-frame Leica M10, which a Mexican wedding photographer purchased four months ago. But the Fuji is considerably larger than imagined, and I strongly considered boxing up without even one shot and returning. 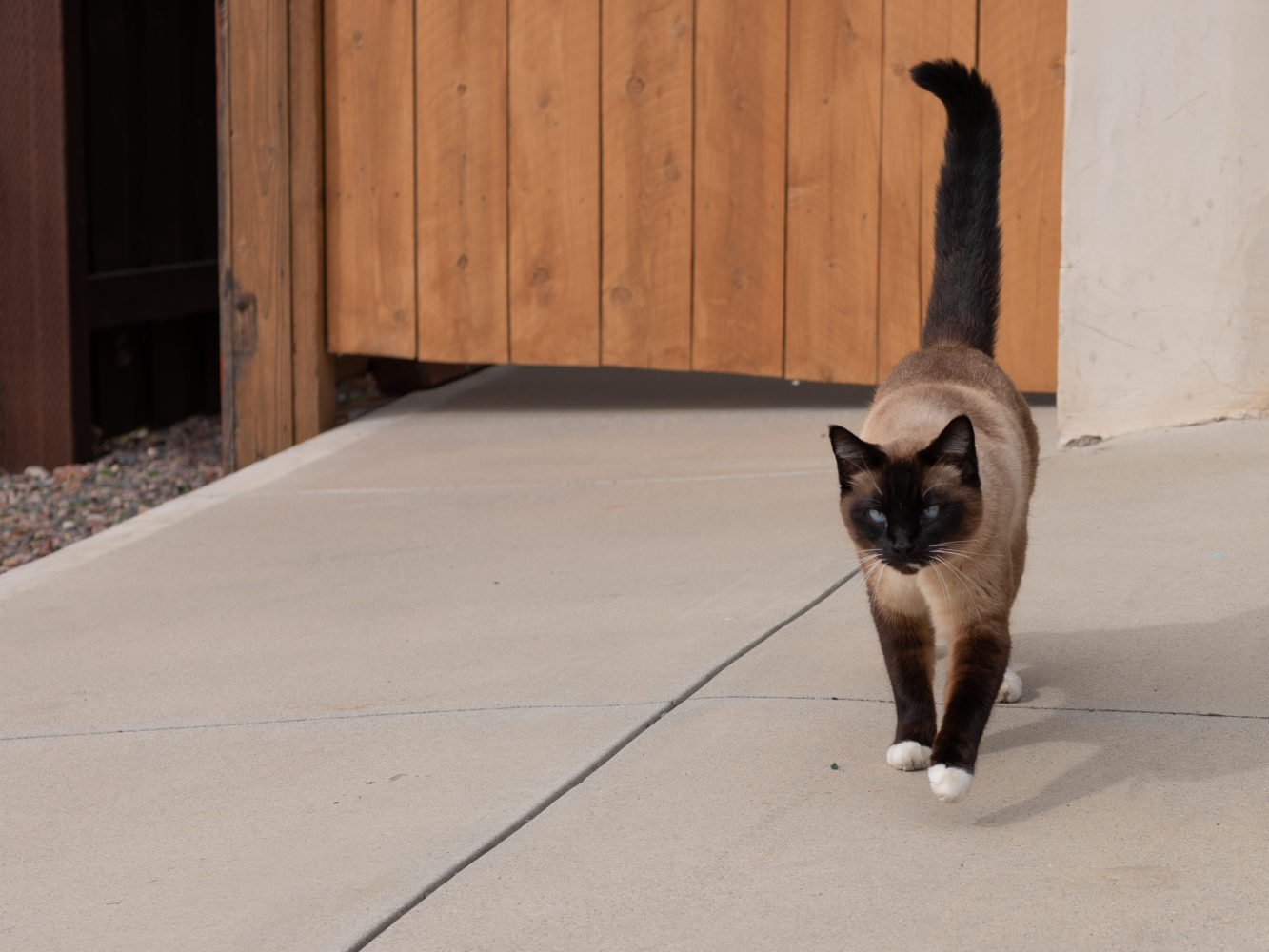 Fast-forward two days. On February 13, while walking with the 50R, I encountered both animals again, and the super sharp photos produced by the camera convinced me to keep it. Already, I was enamored with the rangefinder styling and clean, functional ergonomics. The lens and sensor combo collects so much information, no telephoto is needed. Close crop and recompose. I have never been more pleased by a camera’s output and handling. 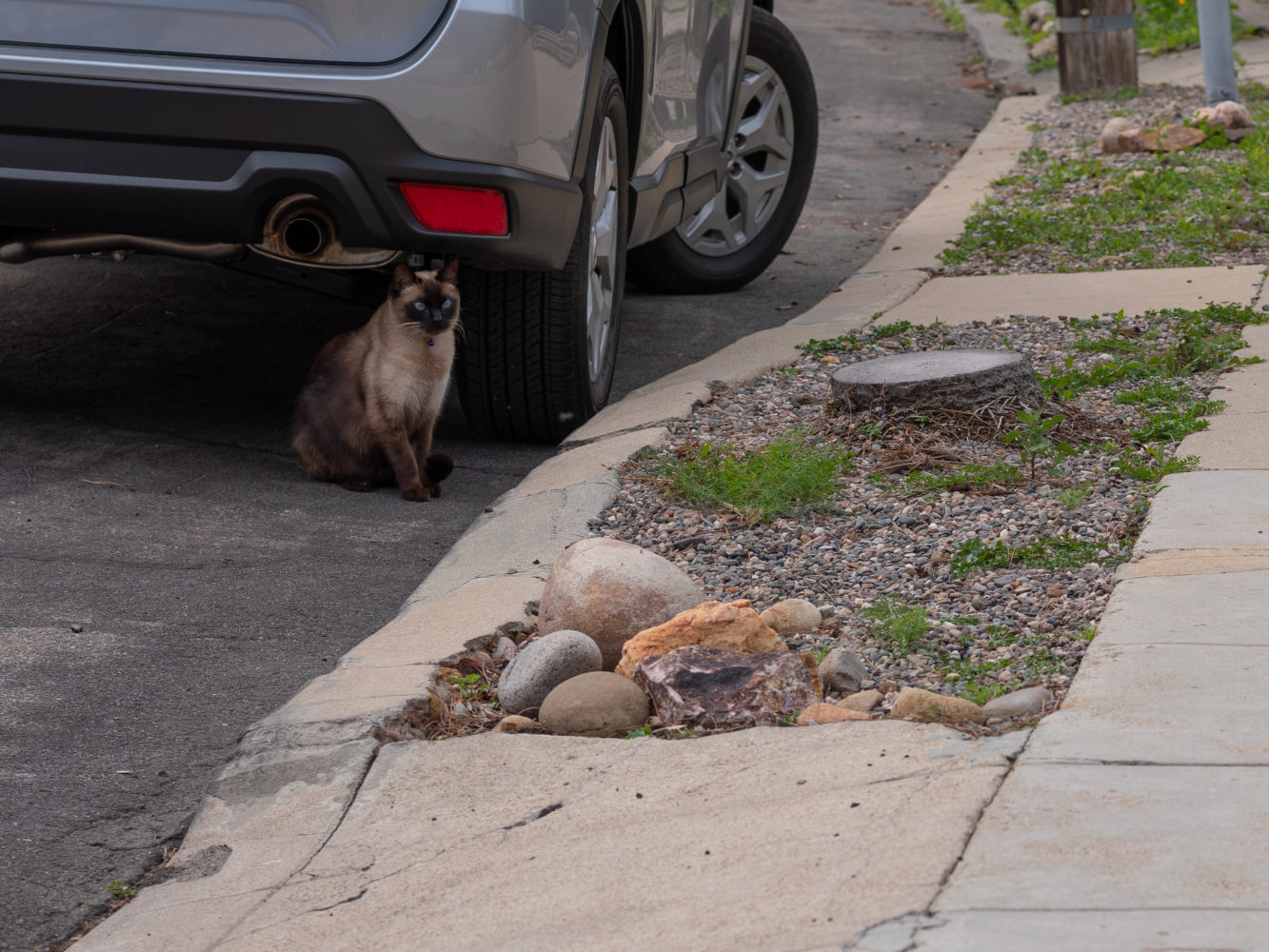 The cats played as I approached them, running around one of the yards from the first sighting, among parked cars, and across the street. The street loops, such there is little but local traffic, making the roadway uncharacteristically safe for the Siamese Twins (yes, my nickname for them). They are more at risk from coyotes, which during springtime breeding season come out of San Diego canyons searching for food. This week’s unusually heavy rains will drive even more of the predators into the neighborhood. Missing cat postings are sure to follow. 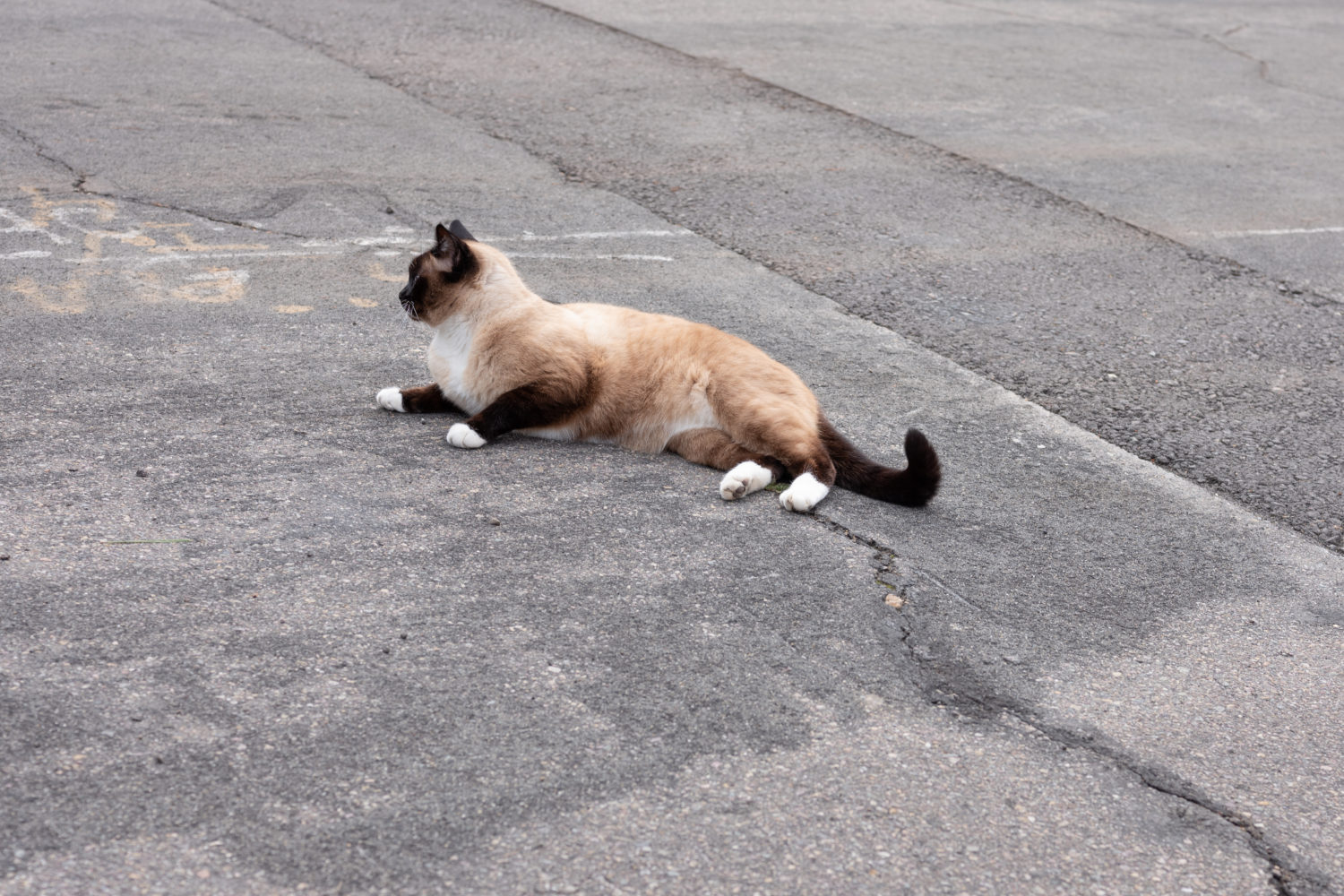 The Twins frolicked a few doors down from where live, or lived, tabbys that I nicknamed Mates for their series profile in October 2016. I frequently see one of them still. During Spring coyote season 2017, the other disappeared—that is if I rightly (and sadly) identified the photo on “missing cat” fliers posted in the area. 🙁 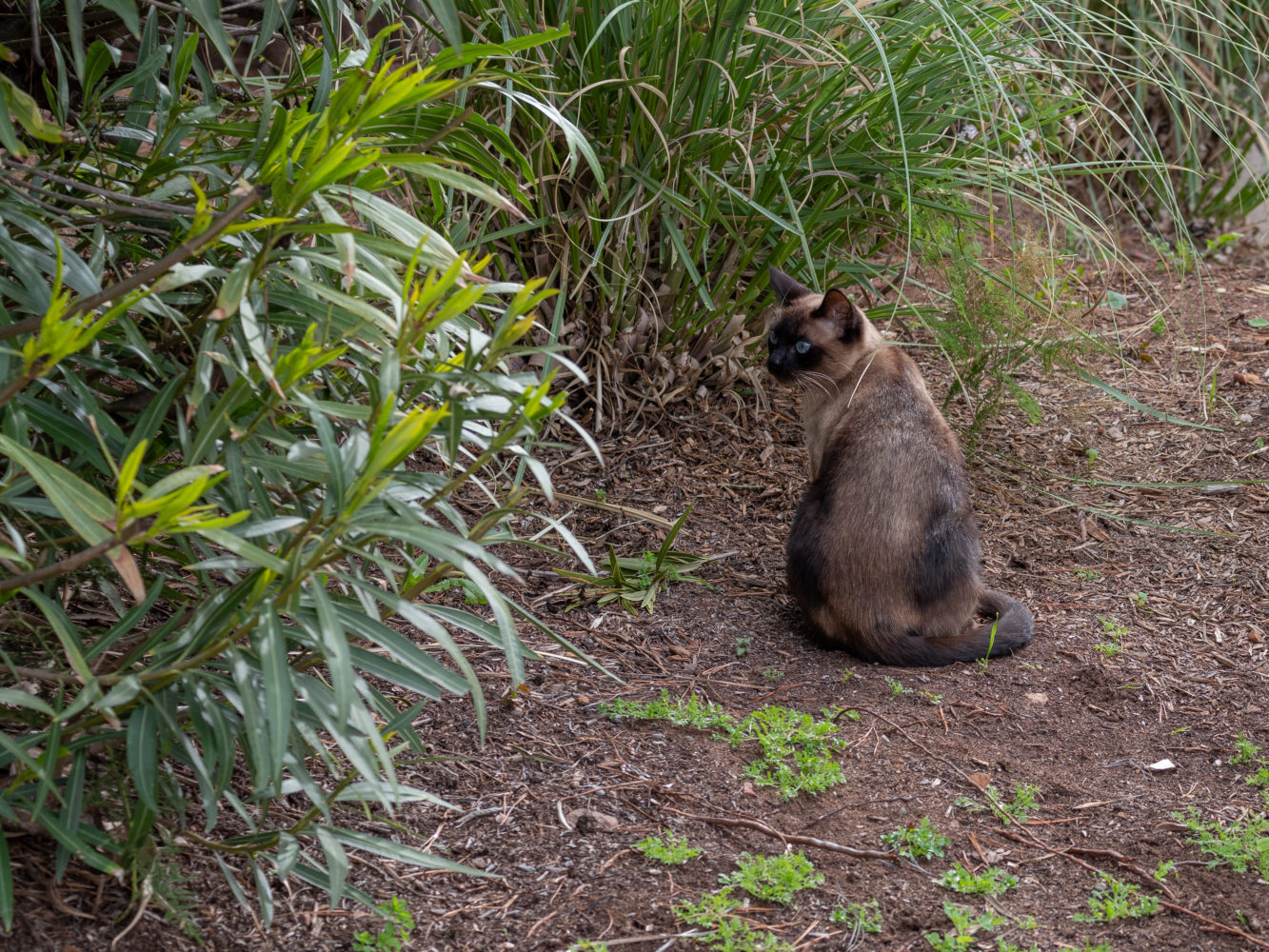 Using the GFX 50R, I shot the Featured Image from across the street, cropping in close during post-production. Most of the five presented portraits are edited, from the Raw—generally just the Shadows slider in Adobe Lightroom CC. Vitals, aperture manually set: f/5.6, ISO 100, 1/150 sec, 63mm; 10:09 a.m. PST. The second and third photos, taken one minute earlier, are same except for 1/420 and 1/340 sec, respectively. The fourth also is 1/150 sec. Number five, which is my favorite of the set, is 1/80 sec and 10:10 a.m. Reminder: Click the photos to see them larger.