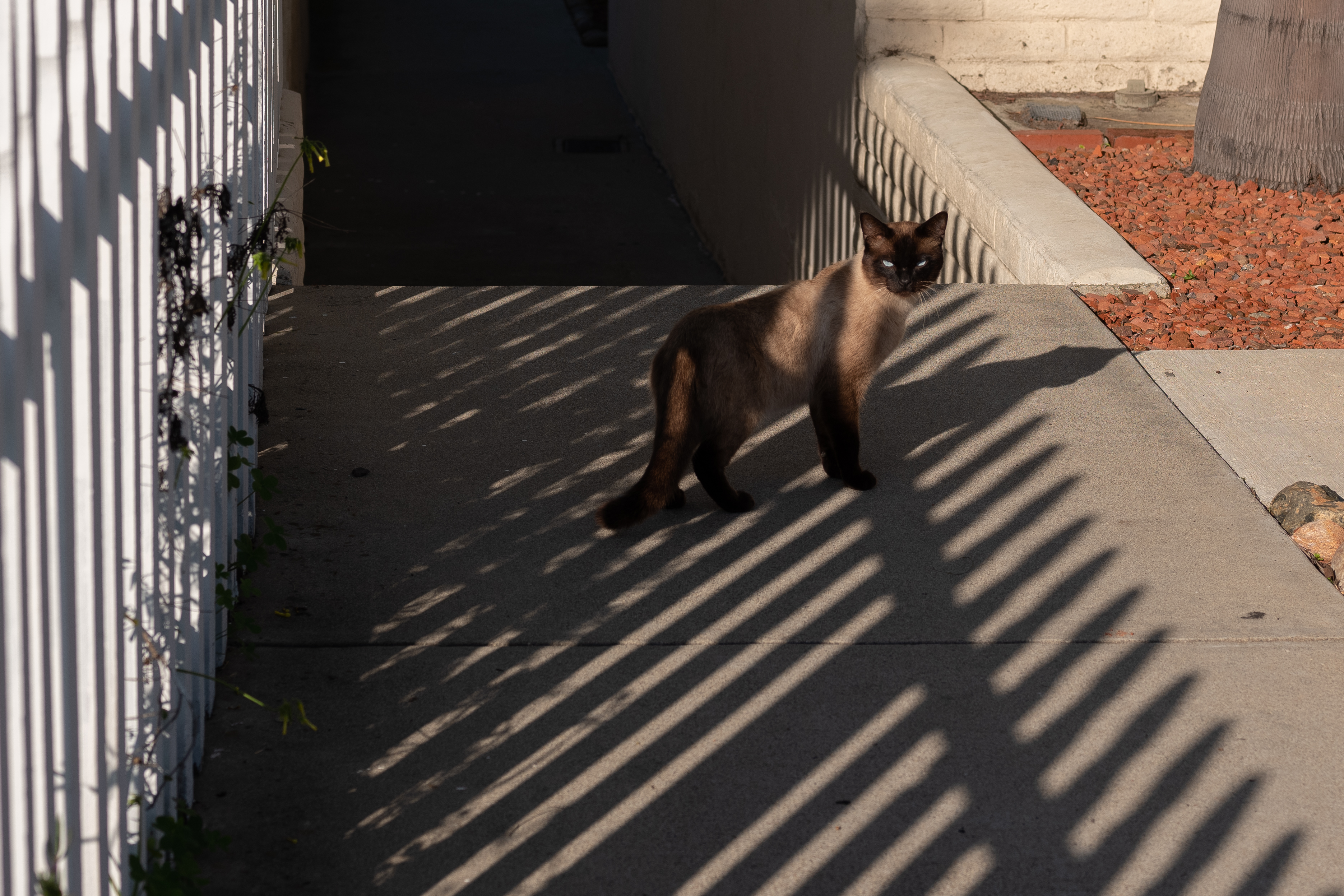 Dare I present another Alabama Street cat? The thirty-second? Recently, I have expanded my feline photo walks into rarely traversed parts of the neighborhood—like the many dead-end roadways—desperately searching for someplace that can match Alabama’s kitty sightings. Nowhere comes close, and I still cannot explain why.

That said, today’s beastie, whom I nickname Sly, was long sought after—and perhaps only a saddening situation could reveal him (or her). Late-summer 2018, I caught a brief look at the animal as it slinked down apartment complex stairs next door to where live Laramie and Lupe. While presenting glimpses a couple more times, the Siamese proved to be too skittish and quick-moving for my camera. Until yesterday.

About nine days earlier, Laramie’s and Lupe’s owner moved to another state, after living for 17 years in the same rental house. His new landlord only allows two pets; he chose to take the dogs and leave the cats. For now, they are fed by someone staying at the property during some early renovation, but their future fate is uncertain.

To his credit, the putty-tats’ owner tried to find someone to take in the bonded pair; I did so, too, on his behalf. A local resident that he refers to as the “cat lady”, because of her benevolence to strays, provided a list of no-kill shelters. But each has a long waiting list—months more than he had to rehome them—and he was of the mind to let the cats continue their outdoor lives around the property rather than chance euthanization. I know that he left behind a big bag of food, and he may yet find another home for them. His plans aren’t known to me. 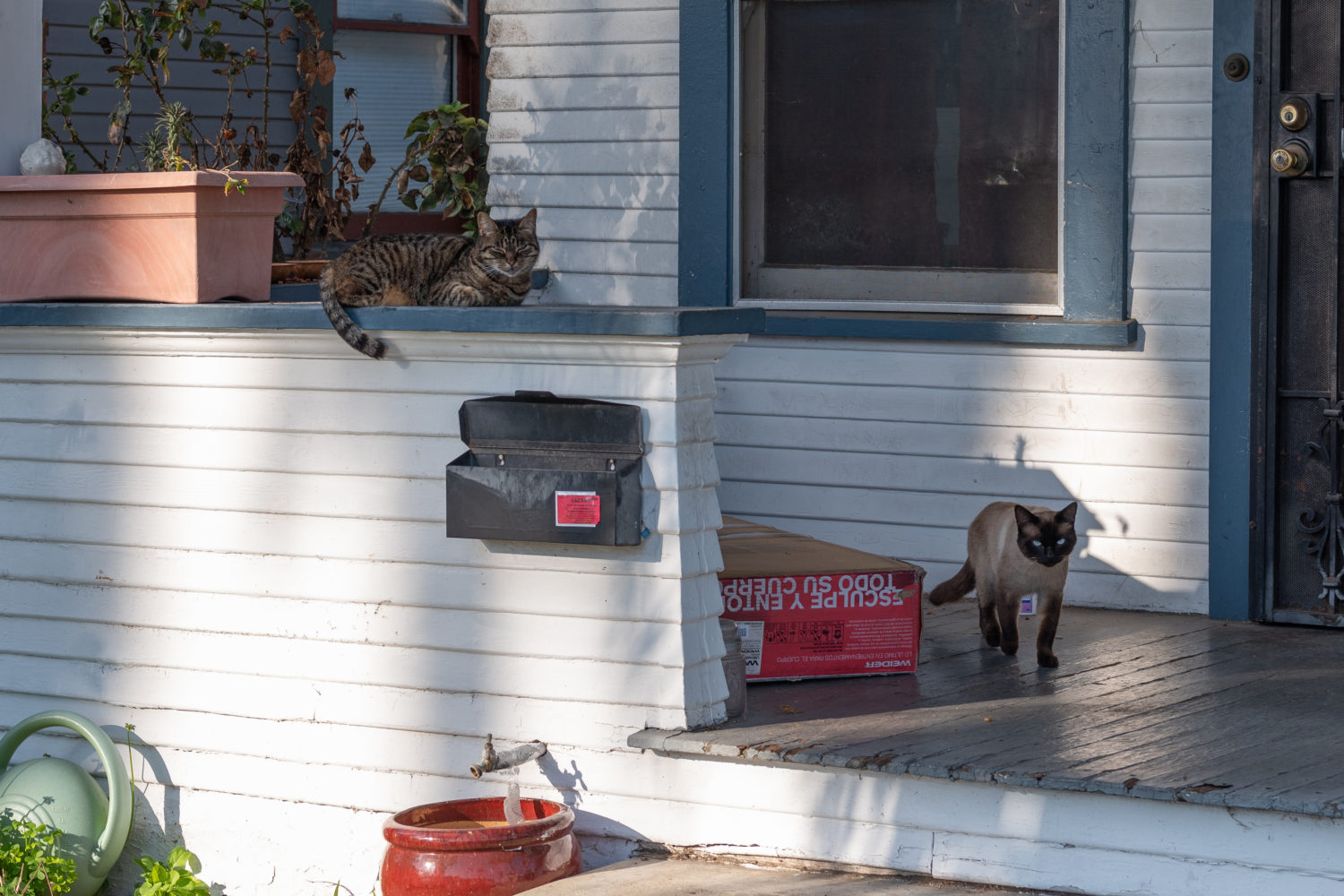 While it pains to think that Laramie and Lupe are orphans, I sympathize with their owner’s dilemma deciding whether or not to separate them from the place lived all their lives and in process risk causing problems with his new landlord. Hasher reality: He moved to an area where coyote cat kills are frequent, putting pets accustomed to being outdoors—and disoriented from leaving their familiar surroundings—at high risk of becoming prey.

The two beasties were used to being fed on a table placed by a porch window. Their food dish now rests on one of the wood railings. Maybe their temporary caretaker puts out more kibble than was given previously. Perhaps changes to the property interests other outdoor furballs. Something attracted the Siamese, which pussyfooted onto the porch yesterday—and I happened to (finally) be ready with camera in hand.

I used Fujifilm GFX 50R and Fujinon GF63mmF2.8 R WR lens to capture the Featured Image, after Sly left the property for the apartment complex where he (or she) presumably lives. In the companion, captured a minute earlier (8:04 a.m. PST), Lupe lavishes sunlight and waits for breakfast—as she has done for many years—while Sly moves off because of my approach (and perhaps the empty kibble dish). Vitals for the first portrait, aperture manually set for both: f/5.6, ISO 100, 1/550 sec, 63mm. The other is the same except for 1/200 sec.

After writing this post and staging for next-day publishing, I recognized a problem with the second photo. The 50R’s medium-format sensor captures so much detail that a handwritten note with name and phone number, left on the door, could be read when the image is viewed full-size. So I re-edited, but with less desirable composition.