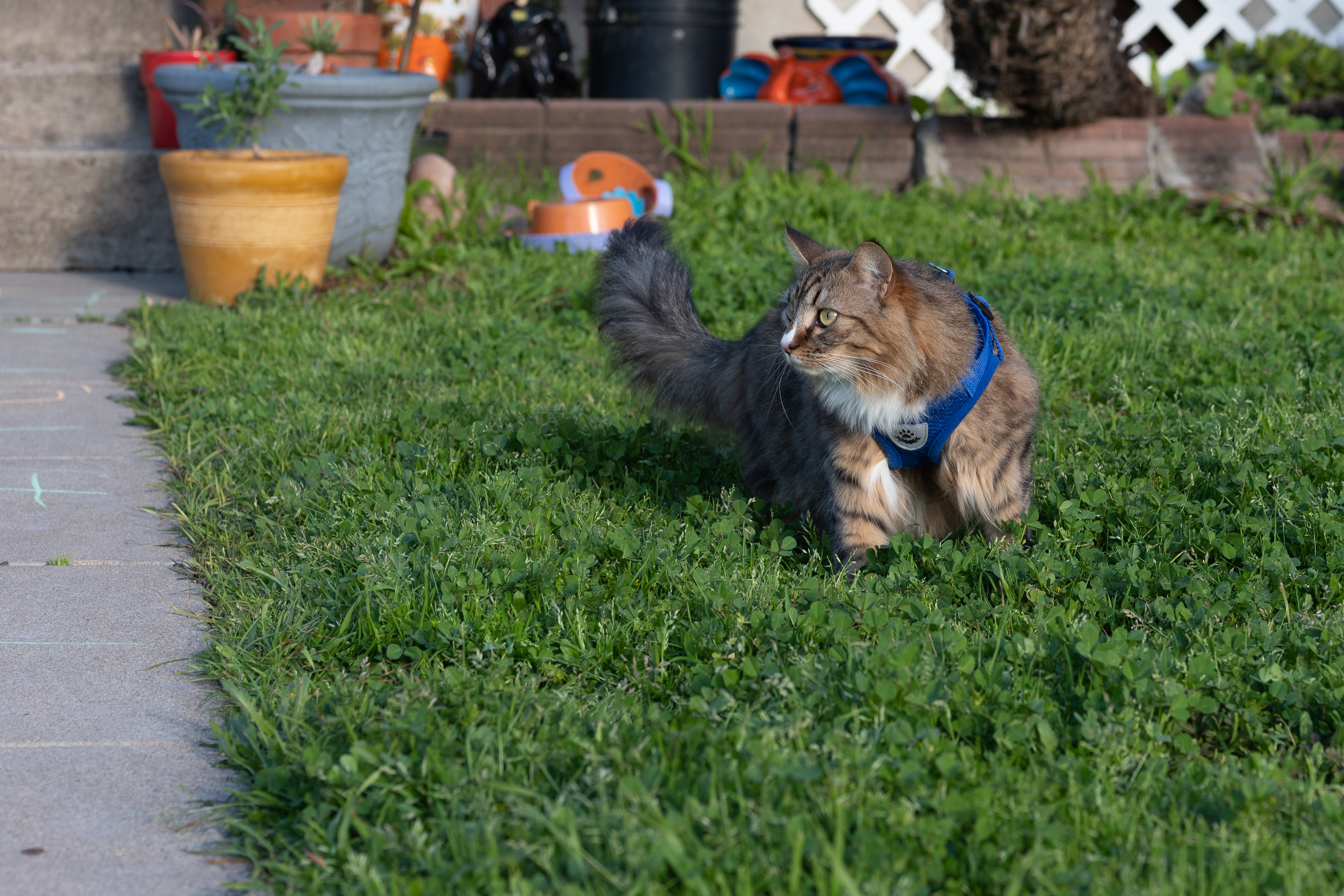 The thirty-fifth feline from Alabama Street—between neighborhood boundaries Adams and Lincoln—is also the third in an impromptu series of harnessed beasties (Jake and Rocky are the others). Peanut is house companion to Rocky, and both shared owner with Monkey, who passed away about 12 months ago. Next door lived Smokey, who disappeared weeks later. In another house down resides Precious. Also on the same block: Alley, Harley, Holiday, Mitsie, and Sly.

Drama of the day was Laramie and Lupe, who lived across the road from Peanut and Rocky and were removed in the late afternoon. Three weeks ago, L&L were abandoned by their owner. This evening, they are being fostered in a Pacific Beach residence by a kind woman whose beloved pet recently died. The rescue group assures me that wherever Laramie and Lupe are adopted, the bonded pair will stay together. 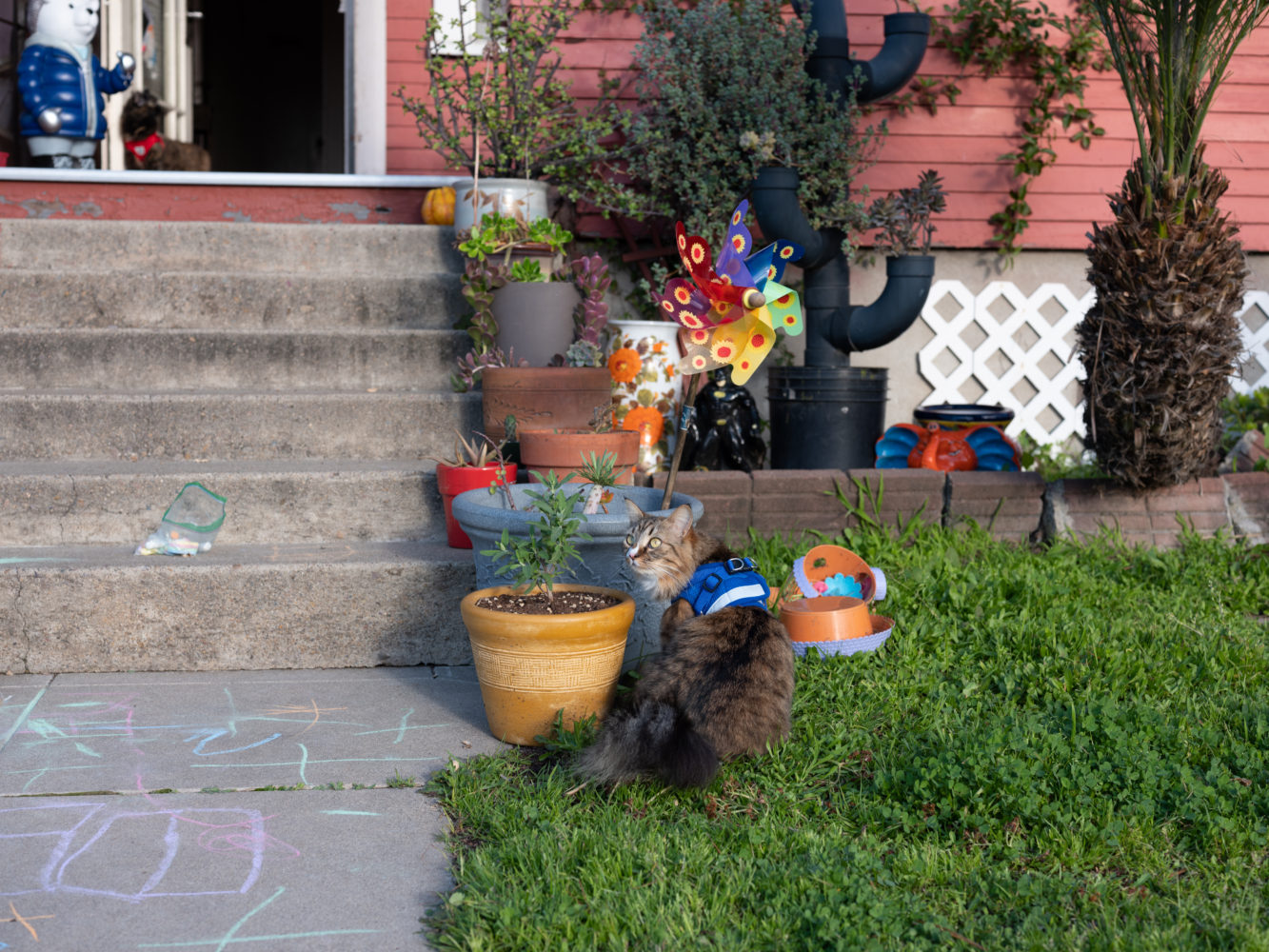 Speaking of bonded pairs, that’s Peanut and Rocky when living at the shelter—and so how they came to be adopted together. Yesterday, their caretaker had them out on her lawn in harnesses and practicing for when leashes might be attached. Bonded maybe, but the Tortoiseshell stayed close to the porch, while the Maine Coon-like one (but with short legs) romped around the yard. As such, I got much better photos of Peanut, taken using Fujifilm GFX 50R and Fujinon GF63mmF2.8 R WR lens. 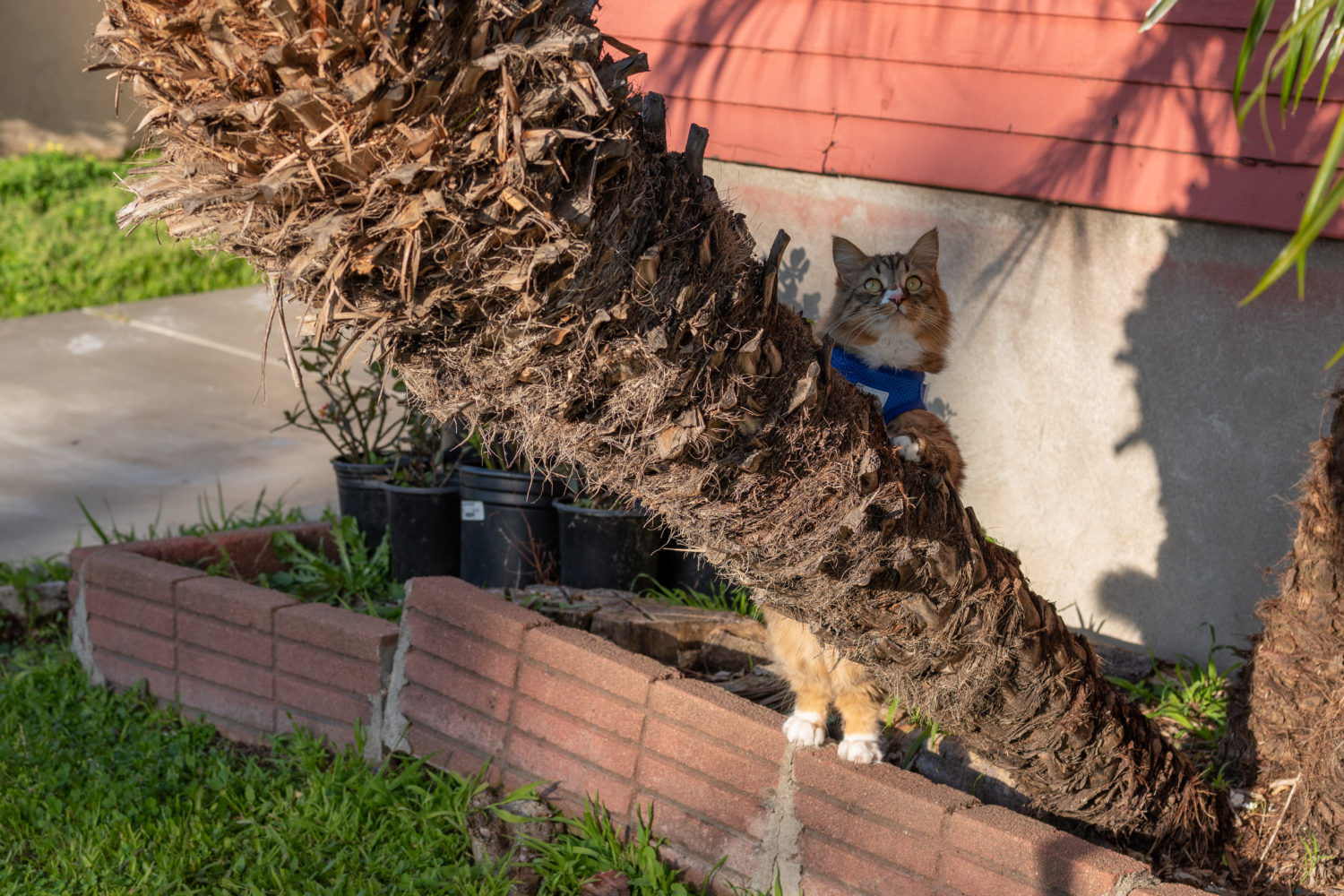 This cat may be the most photogenic to appear in the series, since its start in October 2016. The Featured Image alone is proof of that claim. Vitals, aperture manually set: f/5.6, ISO 100, 1/90 sec, 63mm; 4:40 p.m. PST. The pic is cropped but otherwise not altered. The second photo, like the first, isn’t tweaked (warning: 30MB file when clicked to enlarge). That’s Rocky on the porch, BTW. She’s a bokeh baby. Vitals are the same except for 1/80 sec, two minutes earlier. 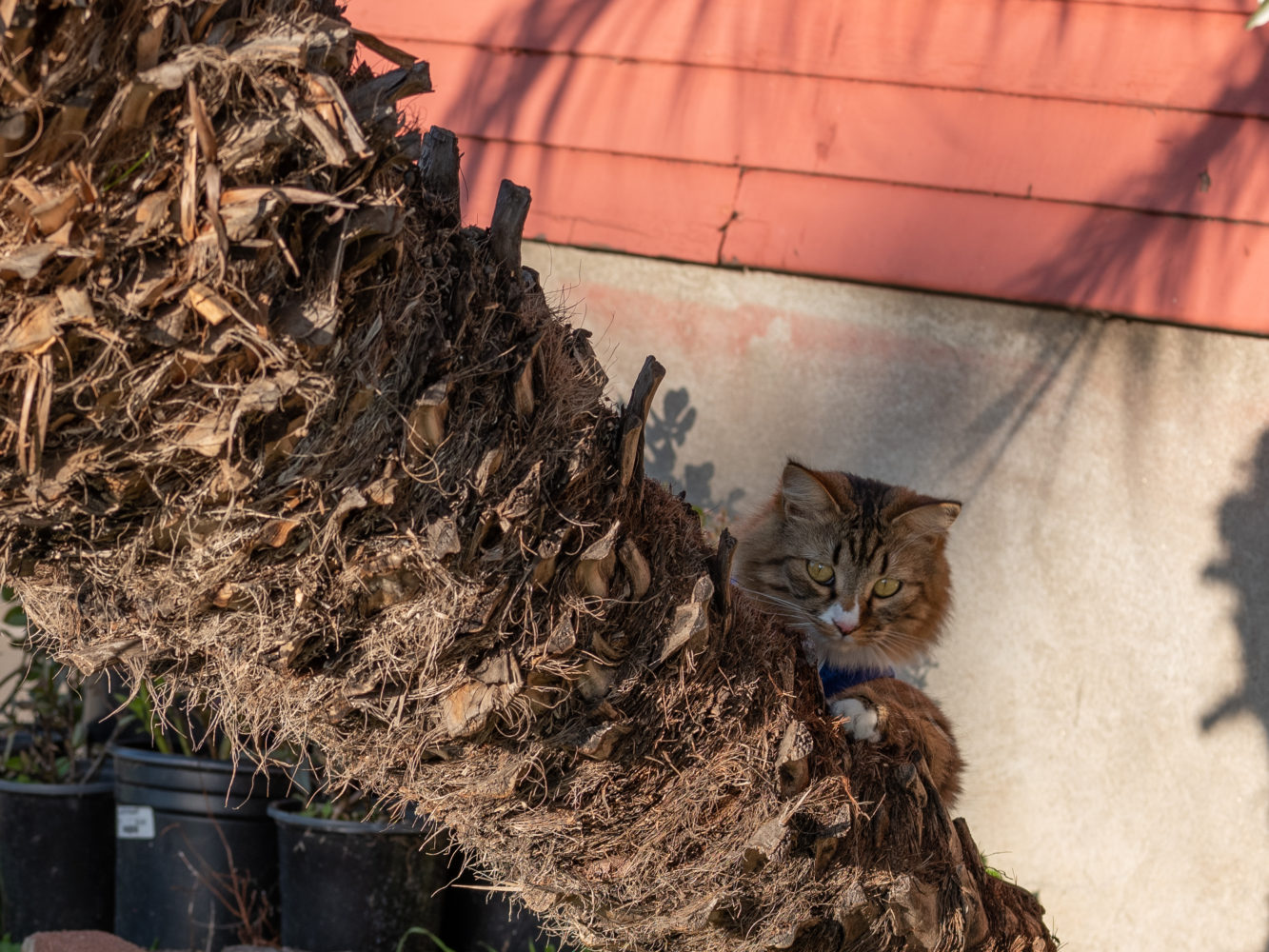 The third and fourth portraits are among a series where Peanut climbs a short palm tree. Vitals: f/5.6, ISO 100, 1/170 and 1/180 respectively, 63mm; 4:46 p.m. I pulled back the shadows to better illuminate the kitty’s face but made no other changes (other than cropping). 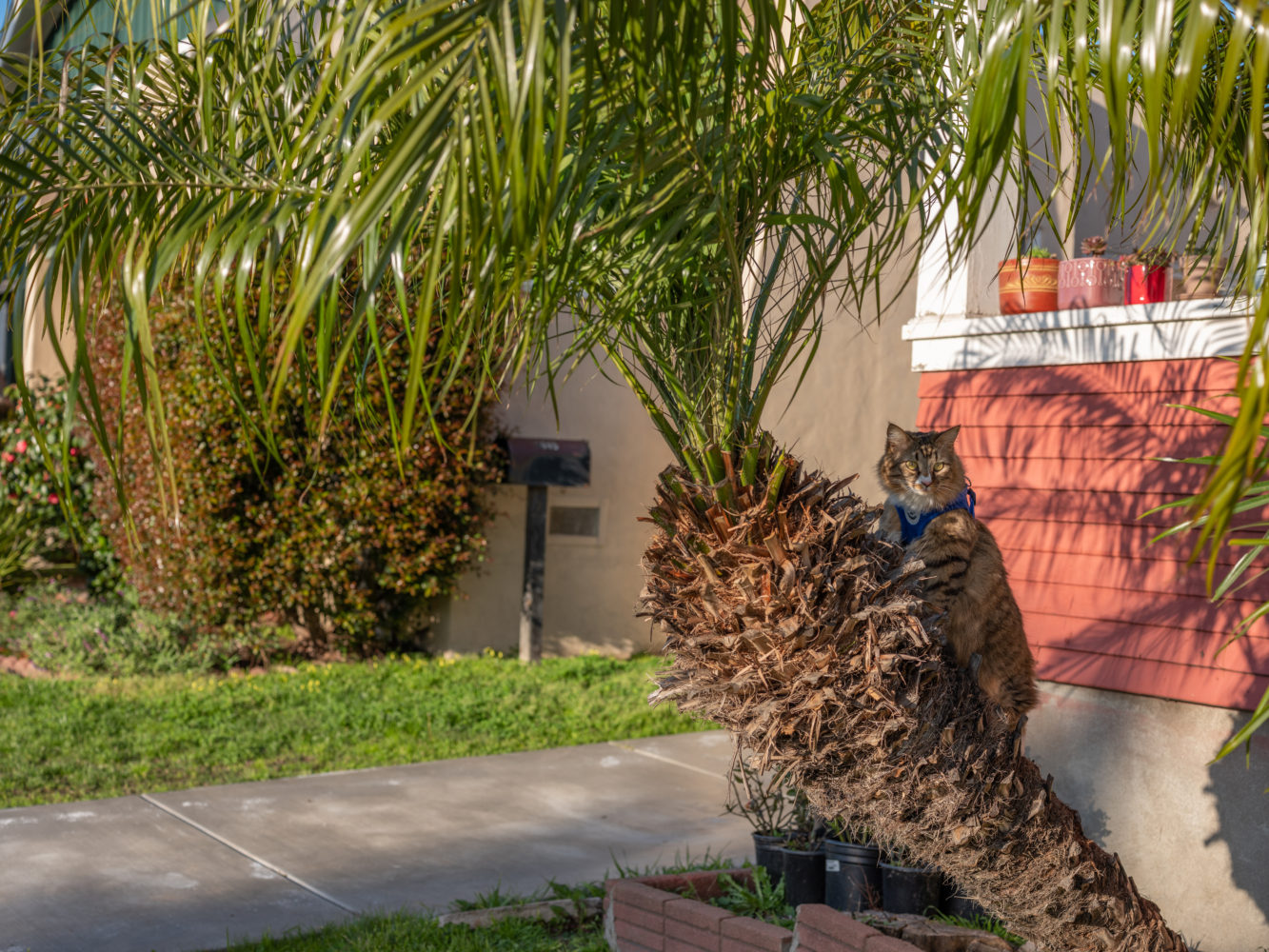 The final two are the same: The original, which is composed as shot (warning: 32MB file when clicked to enlarge); the other is the crop. Again, I pulled back the shadows as the only edit. Vitals are identical to photo four except for time: one-minute later. 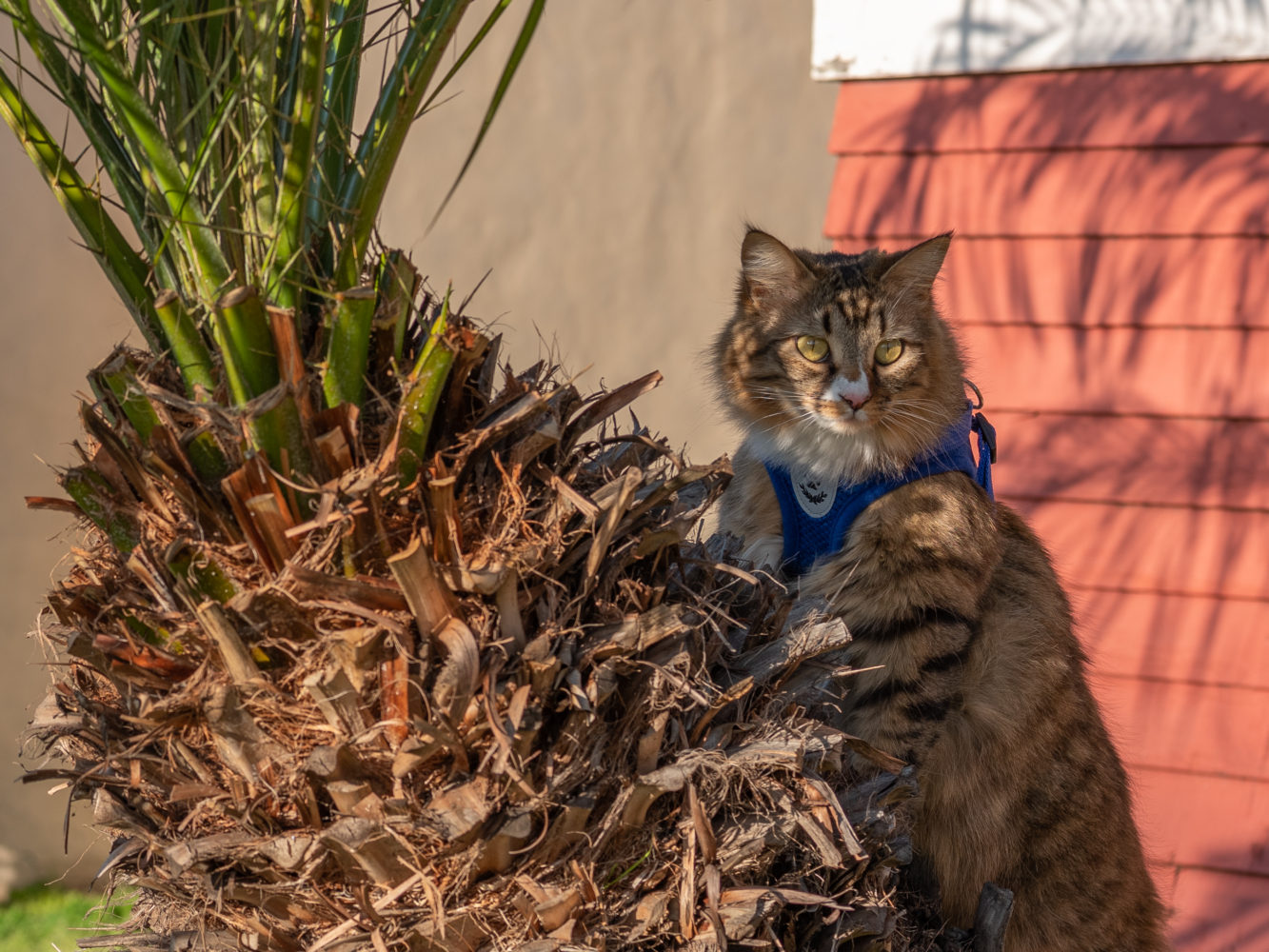