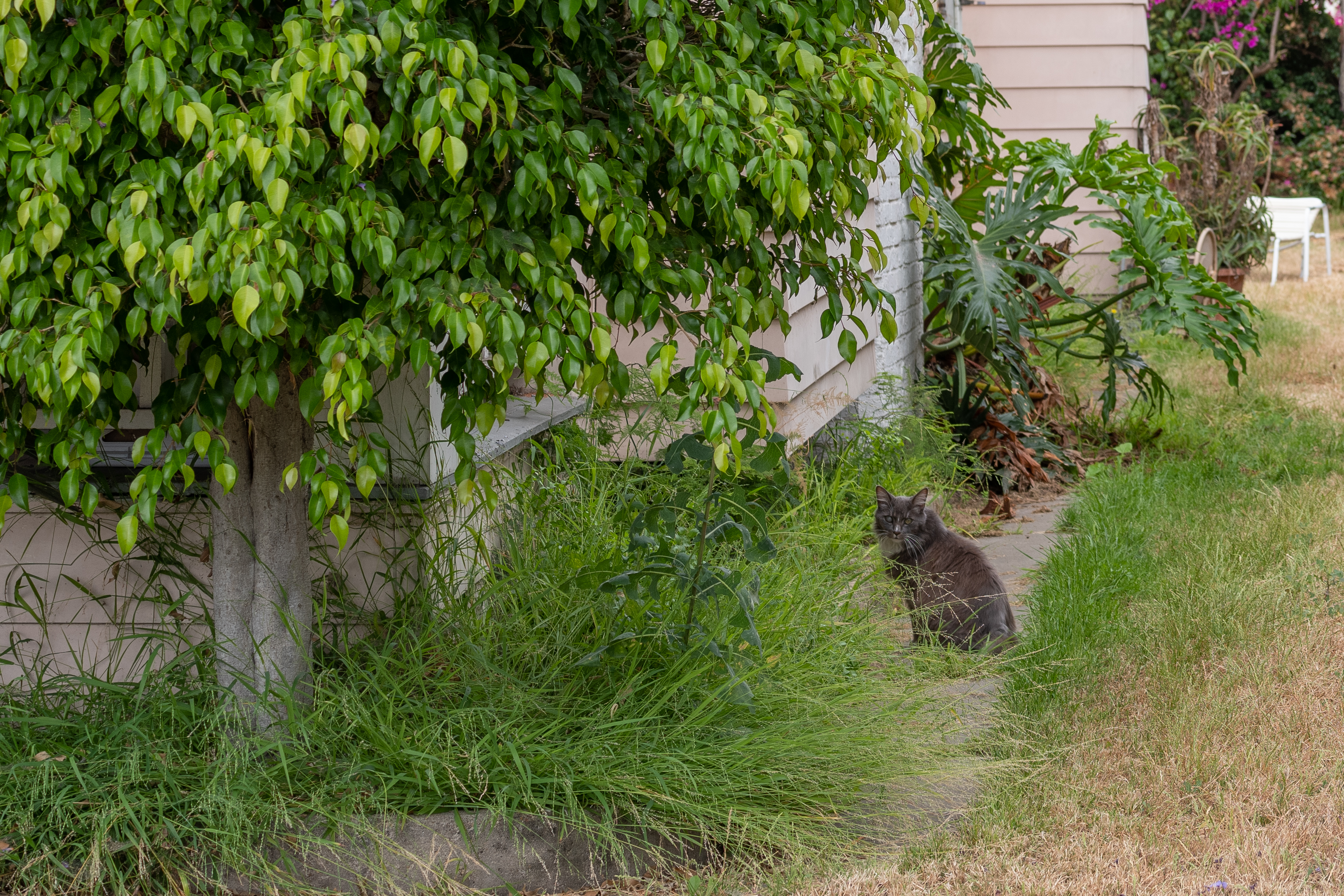 Our second of five, consecutively-presented Alabama cats is thirty-ninth seen on the street between boundaries Adams and Lincoln, since the series‘ start in October 2016. For perspective, that works out to 14 percent of the 277 profiles published to date. I spotted the first felines there—on the same block and all on the same day—in September 2017: Itchy Valentino, Goldie, and Anthony. I frequently see the three still.

In fact, on July 7, 2019, as my wife and I walked by, Anthony trotted across his yard for some pats; guess he heard us talking and recognized our voices. As Annie bent down to oblige him, movement behind raptured my attention. The Tuxedo had a visitor, who wasn’t feeling friendly towards us. Ah, sorry for the interruption, kitty.

I carefully pulled around the Fujifilm GFX 50R and Fujinon GF63mmF2.8 R WR lens. I love the camera, but beastie subjects scare off soon as the medium-format shooter lifts to my eye. The ergonomics and image quality are superb, but overly large, intimidating physical size has me considering something much smaller. The grey pulled back, in typical response. 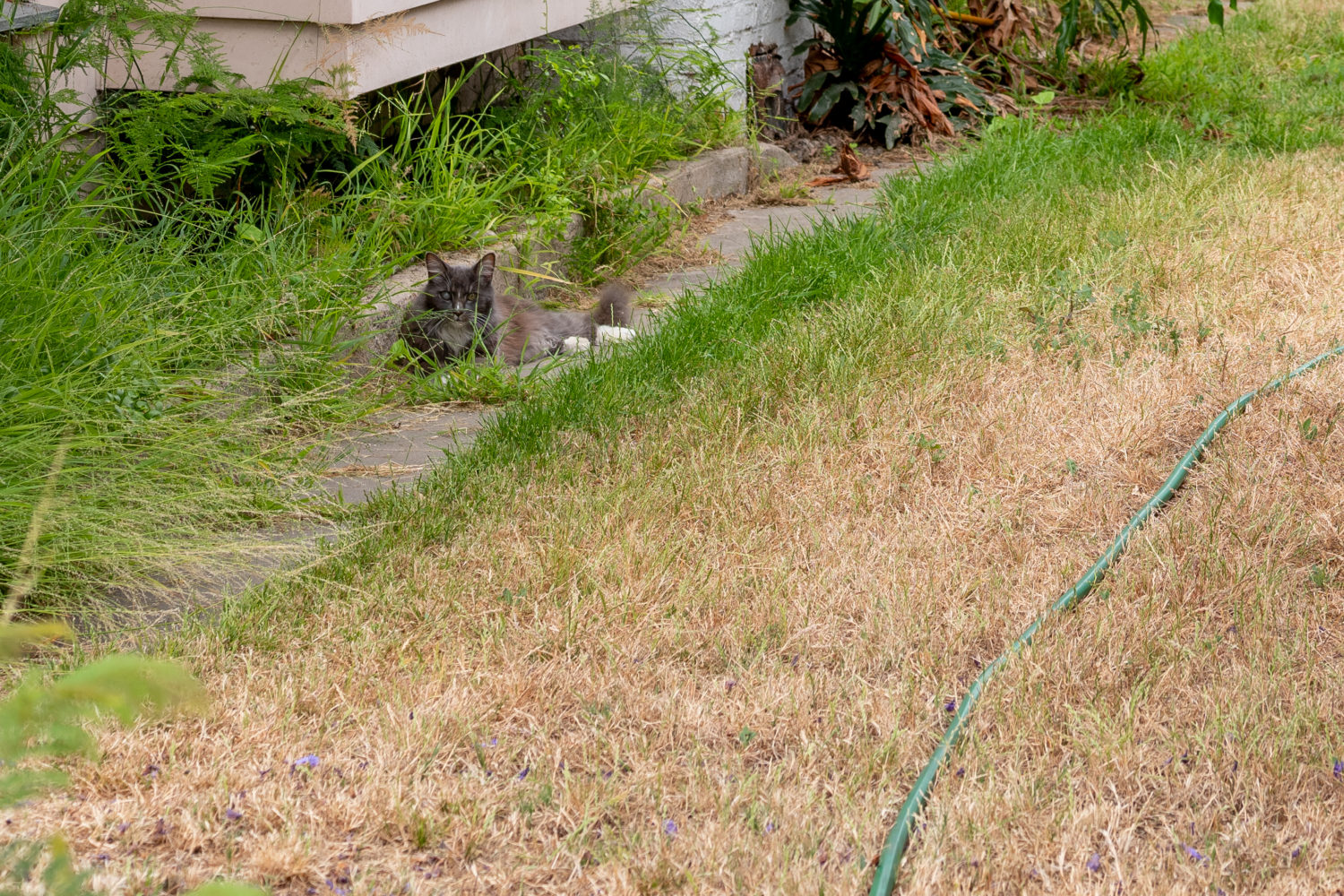 Featured Image vitals, aperture manually set: f/5.6, ISO 100, 1/180 sec, 63mm; 10:03 a.m. PDT. The other is the same, except for 1/120 sec. Both portraits are close-crops. I nickname the longhair Boots, for its prominently white paws. But I considered choosing a moniker more appropriate to Boots’ physical disposition. The animal appears to be blind in its right eye. Oh my.

Update Jan. 30, 2020: What is wrong with Boots? Today, the kitty unexpectedly appeared in Anthony’s yard, looking so skinny I assumed it must be Itchy Valentino. The cat clearly either is sickly or famished—maybe both. Boots’ fur is unkempt, which isn’t typical for fastidious felines. 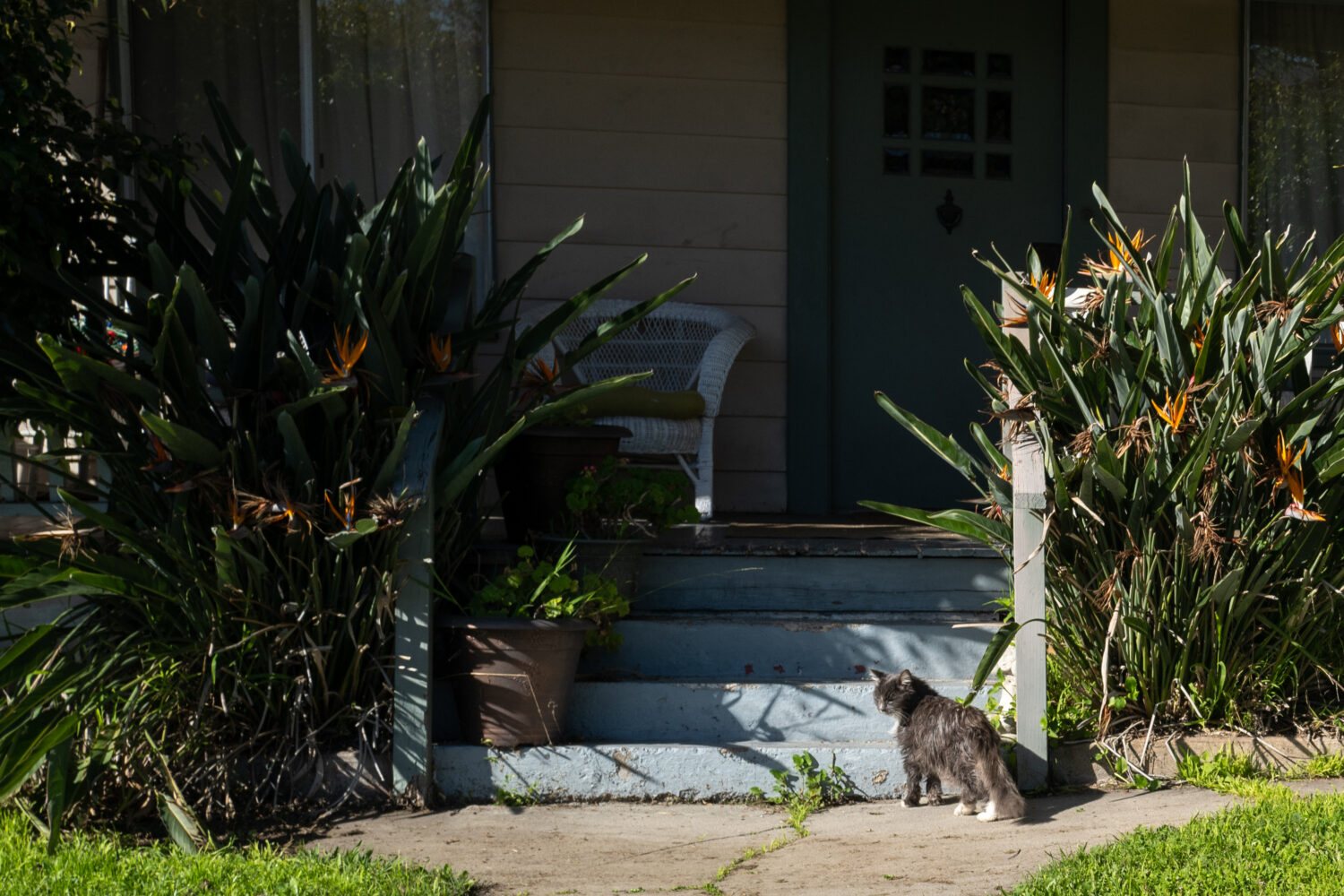 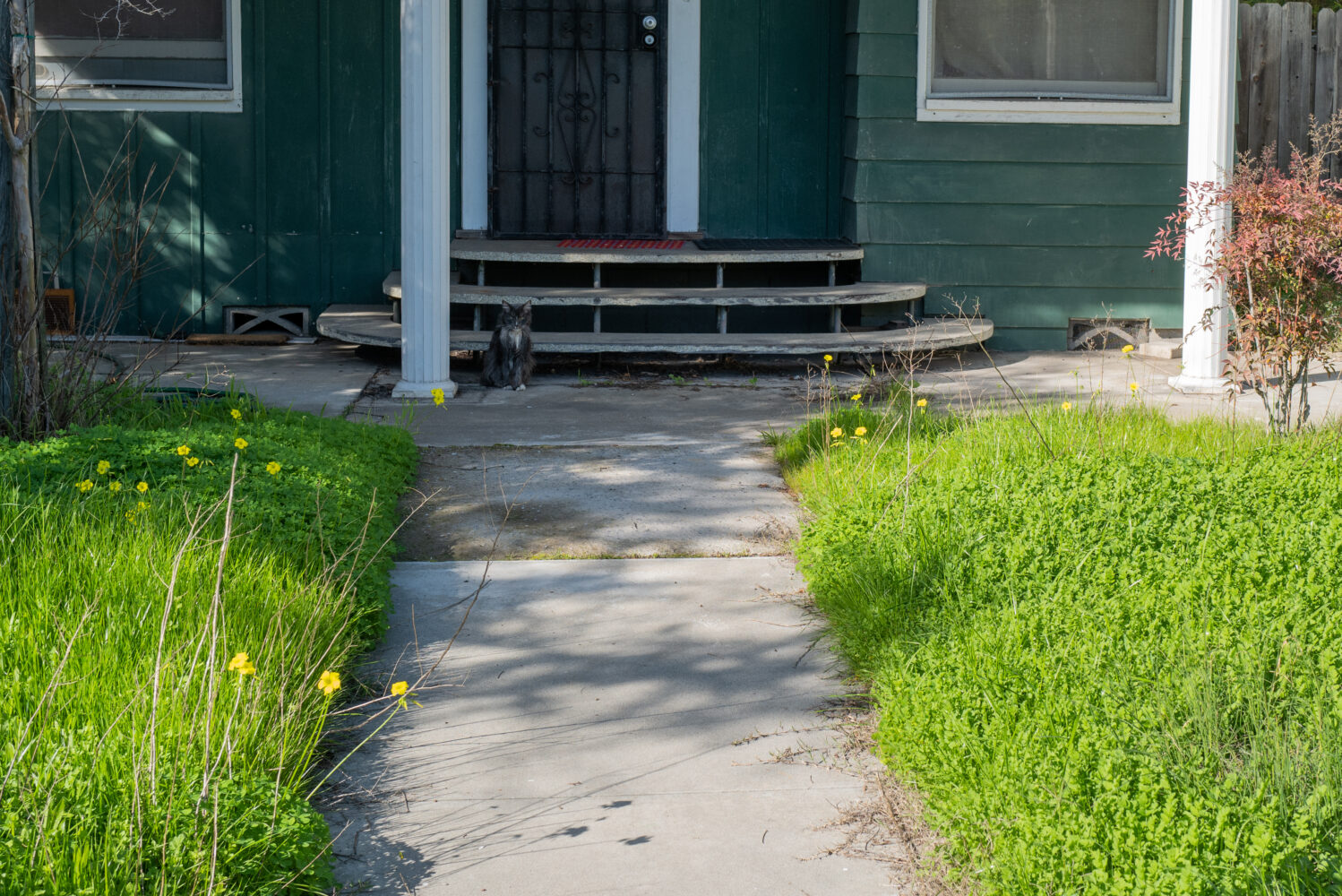 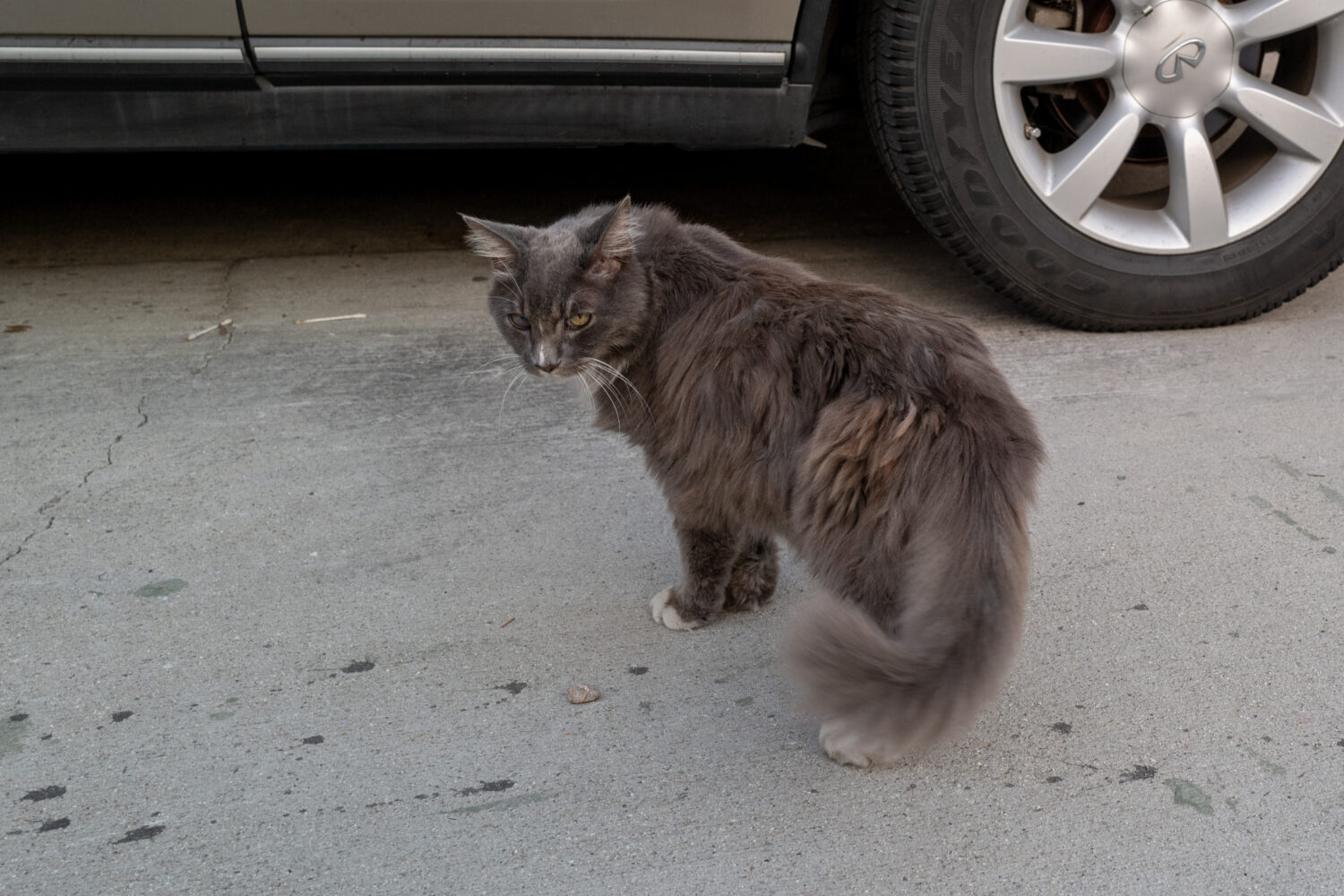 Update Sept. 25, 2020: The mystery of Boots’ skinny form is explained and his real name revealed: Pace (pronounced paw-chay, according to his owner). A neighbor living along Alabama started feeding the cat and, thinking he was lost, later took him to a vet for a chip scan, then notified the owner. My wife followed the drama on Nextdoor. (I quit again, remember?) Yesterday, Pace’s owner posted this:

Hi there. This is for those of you that [spend] too much of your time on Nextdoor app, playing Mrs. Kravitz and passing judgment on people when you should be paying closer attention to your own lives: Pace is my cat, and he has not been lost for two weeks. Pace is an indoor/outdoor cat who likes to roam the neighborhood during the day while I’m out. Most of the time, right around dusk, he heads home for the night. This is something that Pace and I have done for 20 years now. Unfortunately, sometimes during his jaunts he crawls through God knows what and his fur gets all crazy matted.

Skinny? Yes, at his biggest Pace weighed 25 pounds, and now it’s down to a svelte 12 pounds. It happens when you get old. Yes, he has a cataract in one eye but that’s what happens when you live to be 20! Now, considering he is as active and alert as he is, and his breed generally maxes out at 15, I would say I’ve done one helluva job raising my cat.

So again, all of you living in glass houses with rocks in your hand, might I suggest you take a look at your pets and ask yourself: ‘Is your pet going to live to see 20? Would they know to come home after being out all day?’ So, I would ask you that are so quick to pass judgement and assume you know what’s is best for all animals that you remember, humbly, that you do not.

Wow, Pace was huge during his prime. But that’s not unusual for his magnificent breed: Norwegian Forest Cat. I hope to meet the beastie’s owner someday. His response to everyone harping about outdoor cats is refreshingly sharp.