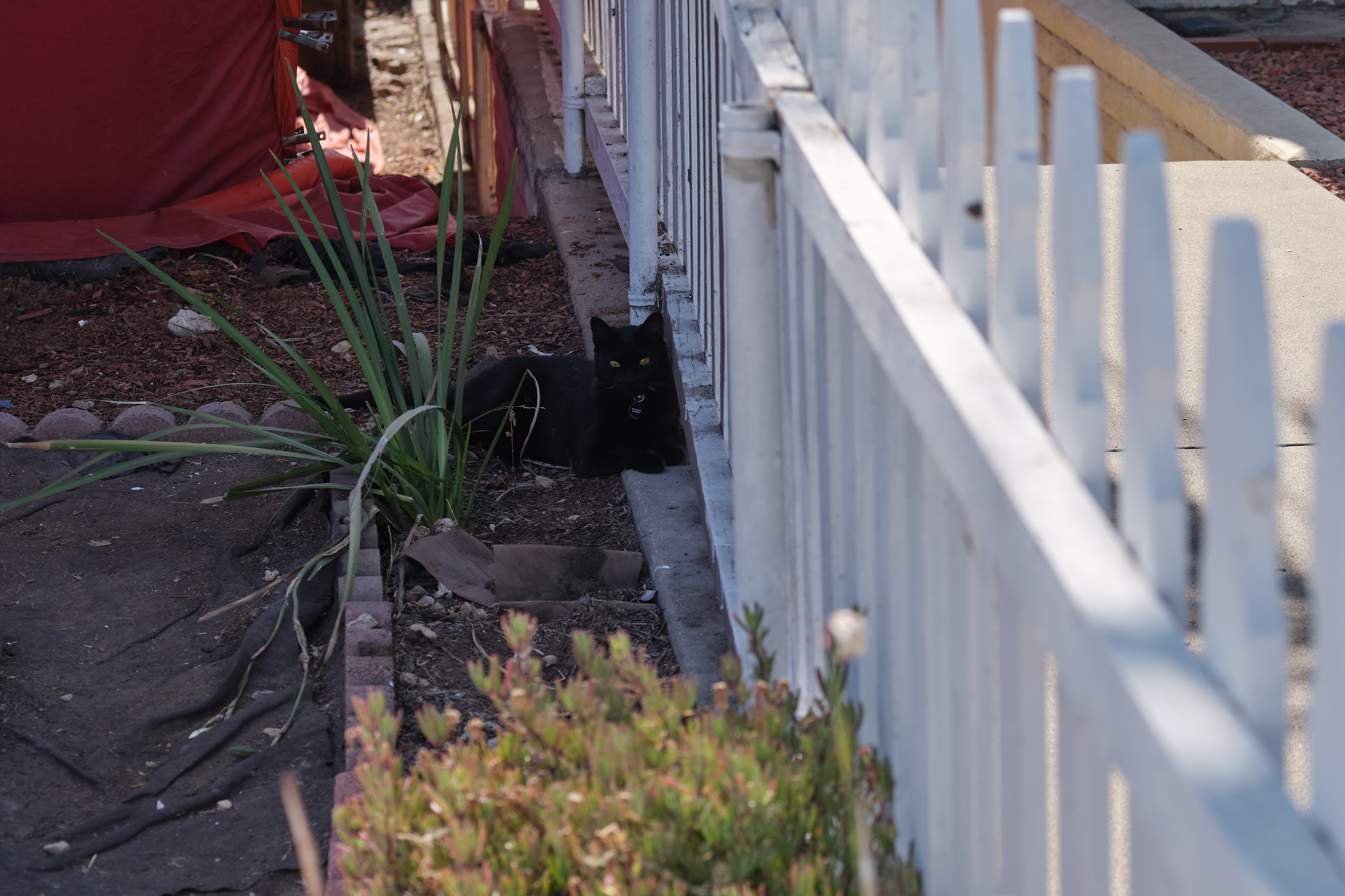 The Alabama cats are back, with the forty-third profiled from the street between boundaries Adams and Lincoln. There is a cache of kittens that may soon be included, should I get photos, that are being fostered across the street from where I saw this black. She earns nickname Diamond, for rarity of sightings.

I first observed the shorthair nearly a year ago, occasionally since—and always fleetingly, mornings when people leave for work. The kitty would disappear down nearby apartment complex steps, where also goes Sly. On July 31, 2019, Diamond made an unexpected afternoon appearance, poking through the fence surrounding the house where lived Laramie and Lupe before they were abandoned and later rescued. The beastie dug into foliage and dirt, for something, before laying out in unexpected repose. Oh, how I wanted to read the name tag, but close approach wasn’t happening. 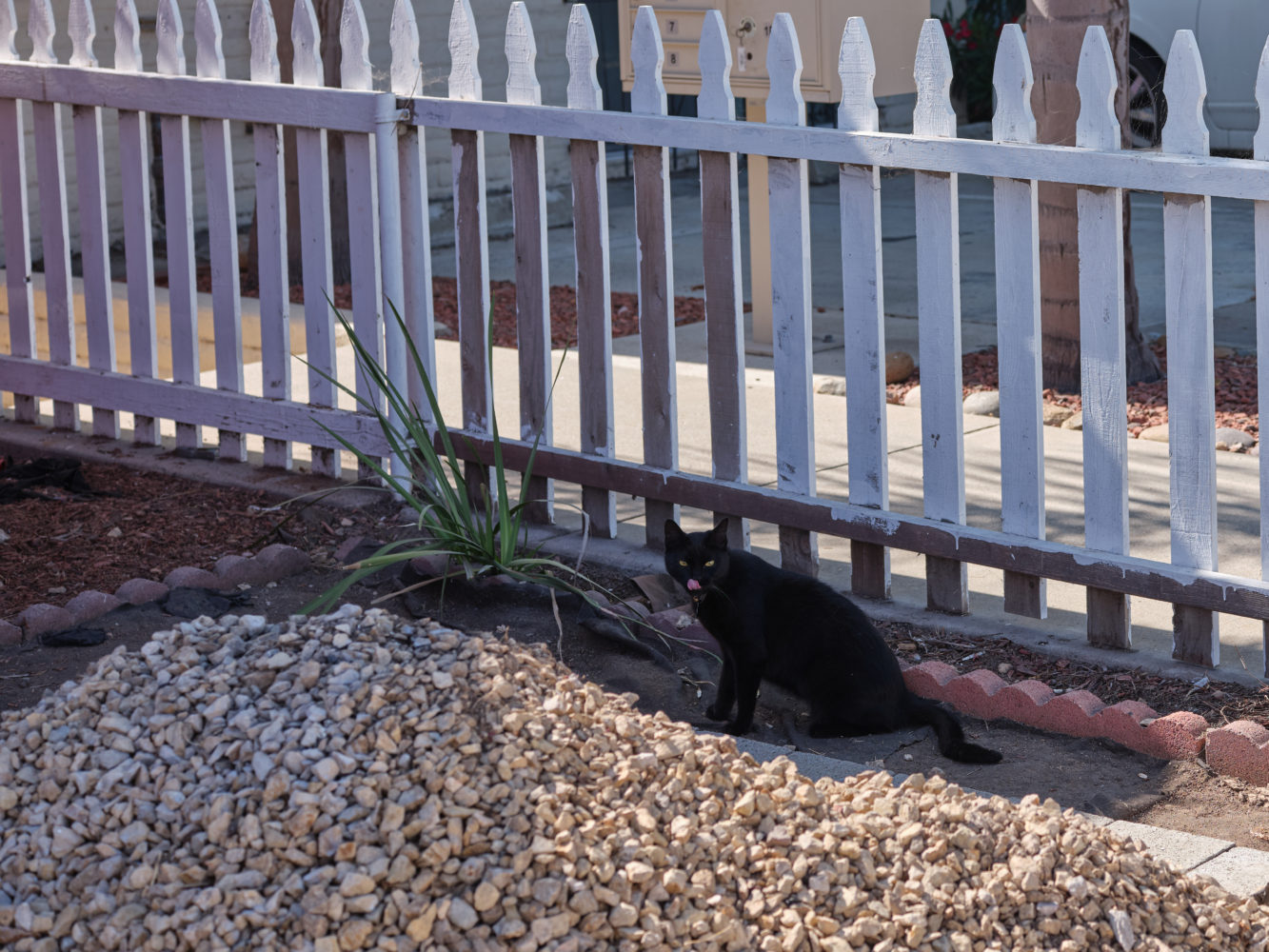 The house has been undergoing renovations, as new owners ready to take up residence. It’s refreshing to see a home purchased and fixed up for use by the buyers rather than flipped for haughty resale or rental; the latter is too common circumstance in this neighborhood. On the day I photographed Diamond, using Fujifilm GFX 50R and Fujinon GF63mmF2.8 R WR lens, an exterminator’s tent engulfed the building—presumably to kill off termites. 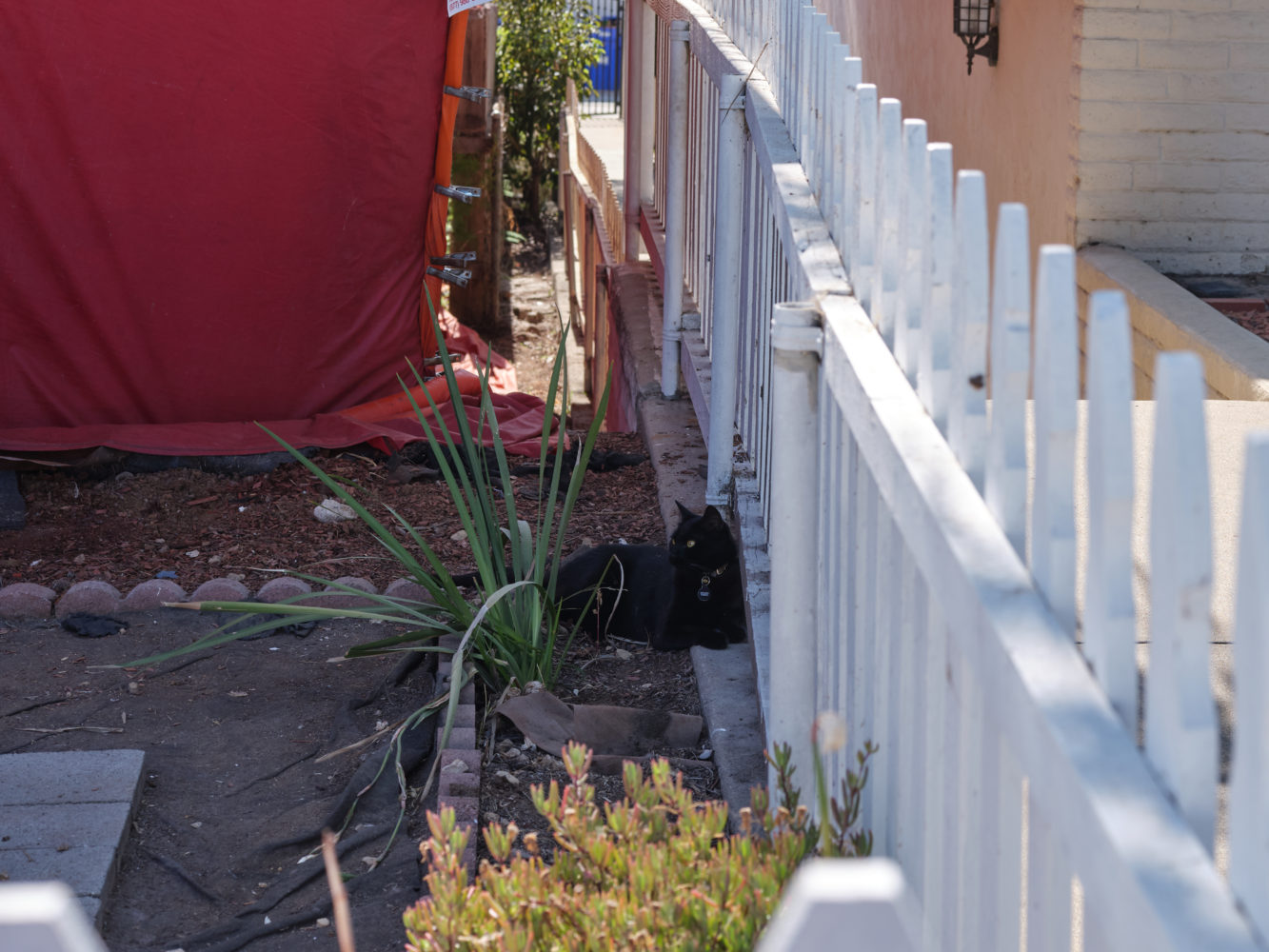 Update, Oct. 1, 2019: The blackie, who for months stayed on the Florida-alley side of Alabama, has been crossing and roaming about the entire block. A few days ago, the kitty strutted out from the yard where Fuki likes to hang out (but also doesn’t live). A neighbor told me that the shorthair’s real name is Gucci and that she lives on Florida.

Today, as I walked along Alabama from Meade, Gucci moved down the sidewalk and into the parking space where I first met Monkey nearly two years earlier. When I passed by, the cat had already gone up to the apartment complex gate, sniffing around but not entering the courtyard. A little cajoling later, Gucci came up for pats and let me confirm name and Florida address from her collar tag.

While the kitty supposedly lives on the parallel street/block, because I have repeatedly seen her on the one but never on the other (and frequently walk both), I have decided to keep her designation as an Alabama cat.

Update, Nov. 20, 2019: Gucci’s owner has reported the cat missing; yesterday, on Nextdoor. She hasn’t been home for two weeks.