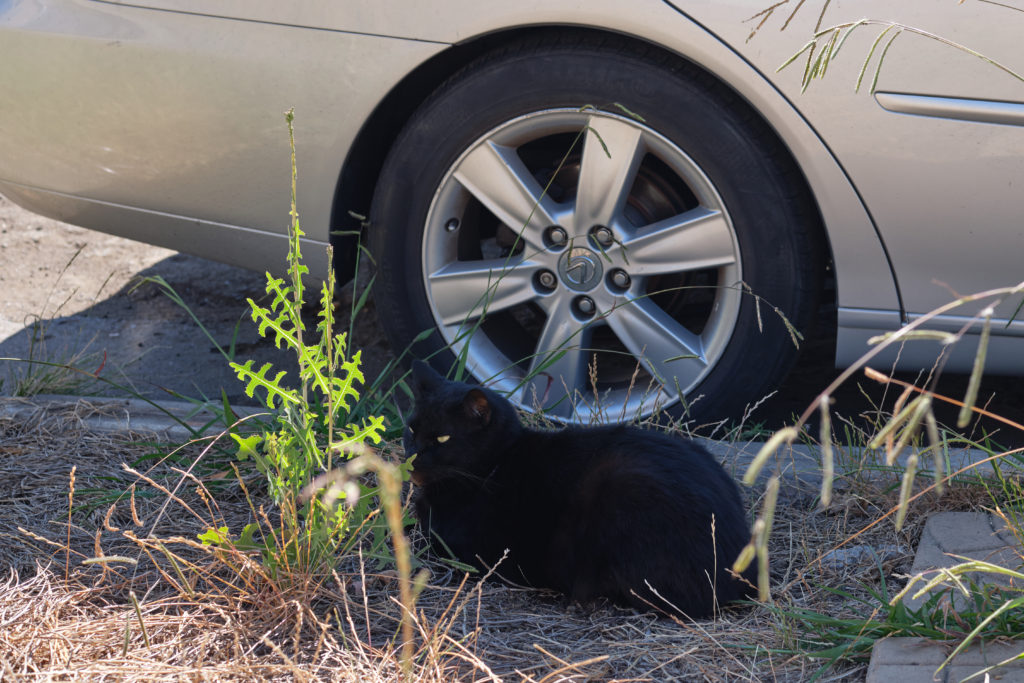 Three years ago today, I started this series with photo of an apparent stray nicknamed Scruffy. In a neighborhood with a bazillion dog walkers, I expected to exhaust the potential population of felines within 30 days—perhaps a few weeks longer, if lucky. How many cats could there possibly be in woof-woof paradise? Thirty-six months later, not only is this thing still going but should I choose to continue (maybe to that) a backlog of unpublished kitty portraits waits on camera(s) and computer. Quite deliberately, Zero’s profile is 300th; but I waited too long to tell his story and that of his mates.

Our tale begins on July 12, 2019, when, while walking along Georgia Street, I spotted a sleeping, sunning ginger who looked lots like Reddy—and on the wrong side of Madison, which is treacherous for people to cross let alone animals. So I purposely returned over the next several days to see; one week later, he appeared, along with two other beasties.

Turns out: Reddy adopted a new residence. The homeowner later chatted with his previous caretakers and found that they were okay with the unexpected change; undaunted by a missing eye and most of his tail, the tabby had long been a roamer. But the lady already kept cats: The grey, Jack, whom I fleetingly saw once, and black Zero. Would Reddy and they get along? Luckily, yes.

Initially not knowing Reddy’s name, the newly adopted caretaker started calling him Jinx—to which he answers just fine. He was unlucky enough to lose body parts, she reasoned. In the mornings, he goes inside the house, meanders to the refrigerator, stretches up with his paws on the door, and meows for his daily treat. Whipped cream! In December 2017, when first meeting Reddy and his original owners, who had him from being a kitten, I confirmed spelling of his name. But given his dietary delight, maybe his old name is better than Jinx but with single-letter swap: As in Reddi Wip! The dairy cream topping!

But I digress from this profile’s subject: Zero. He is a forlorn feline, but surely that mood will shortly pass. When we met, on July 19, he engaged with another ginger, who had come from across the street. The two frequently visited each other’s territory, keeping a kind of stand-offish relationship, which I observed firsthand. But that shorthair, whom I nickname Hero, is gone. Yesterday, Zero’s owner told me that the other cat, and his family, have moved away. The disappearance of his frenemy unsettles the black, who keeps vigil in his yard for Hero—or goes looking for him at the old home where now lives another furball, who is more hostile than accommodating.

I wondered why call the putty-tat Zero and neglected to ask his owner. However, based on her recent report, maybe he feels more like zero with subtraction of his street buddy. Reddy is more independent; the roamer; no good companion. Tenant turnover among the large number of rental properties in the neighborhood means more cats will come and go; perhaps a future frenemy will be among them.

Zero’s home, by contrast is settled. Like the owner of Kitty, the black’s human lives in a home purchased by her grandmother. The place passed on to her dad, then to her, and someday to her son.