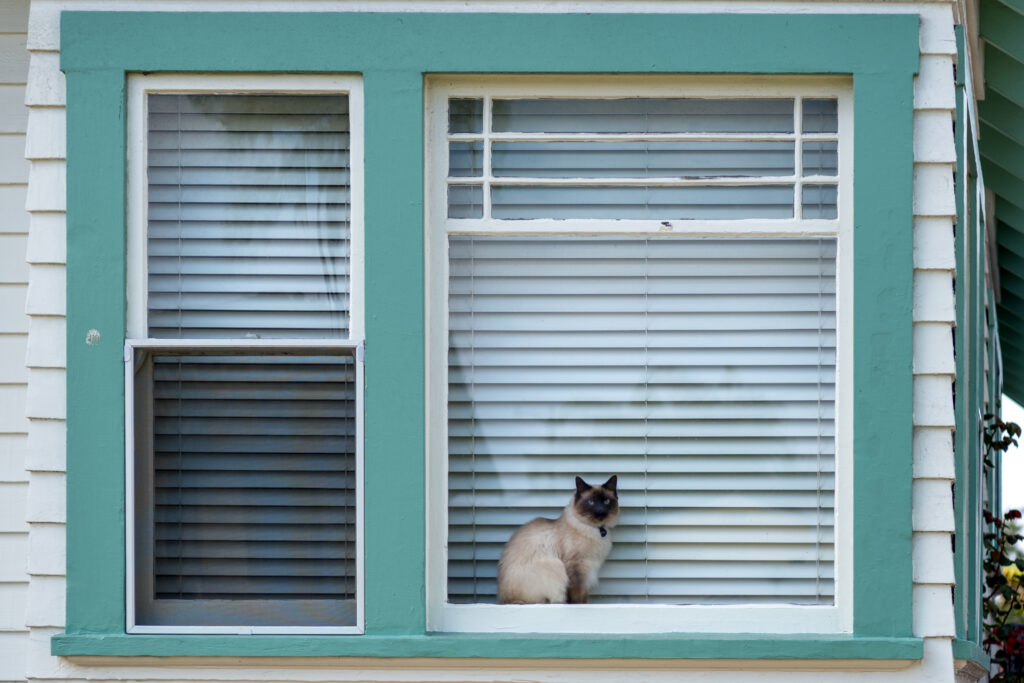 My short-lived time with Leica M10 started in early April 2018 and ended the first week of October of that year. The days are many that I regret letting go the camera. My consistent inability to precisely manually focus prompted my decision to sell. However, a change in eye glasses later—and addition of prisms to the prescription—and my vision is probably more than satisfactory for the task. Sigh.

On April 26, 2018, I spotted Tink inside her window and stopped to practice portrait focusing with the new camera. The Featured Image is the first of seven shots, with Summarit-M 1:2.4/50 lens attached to the M10. Vitals, aperture unknown: ISO 100, 1/1500 sec, 50mm; 9:38 a.m. PDT. In post-production, I used DXO ViewPoint 3 to align the perspective of vertical and horizontal lines.

Yesterday, I met Tink’s owner and learned that old-age-related infirmities ushered her to kitty heaven in April 2020. She left behind a brother, Bello, which unexpected knowledge caused me to look back and reevaluate the seven shots. I vividly recall something from that day: I turned away from the window, walked twenty paces to the property’s steps and came upon Tink. I assumed she had come out through an open door to greet me, although the speed surprised me.

Turns out Tink, who roamed in and out of doors, was always there; she made no mad dash from the house. No question, in reevaluating the portraits: I observed Bello, who is an indoor-only pet. He is the series‘ sixty-first feline profiled behind window or door.

After his sister passed, Bello mourned her and roamed the house searching everywhere. He couldn’t be consoled. So his owner adopted a shelter kitten, who is named Amai, which is Japanese for sweet. The new, and younger, cat wooed Bello, and now the pair are bonded companions.