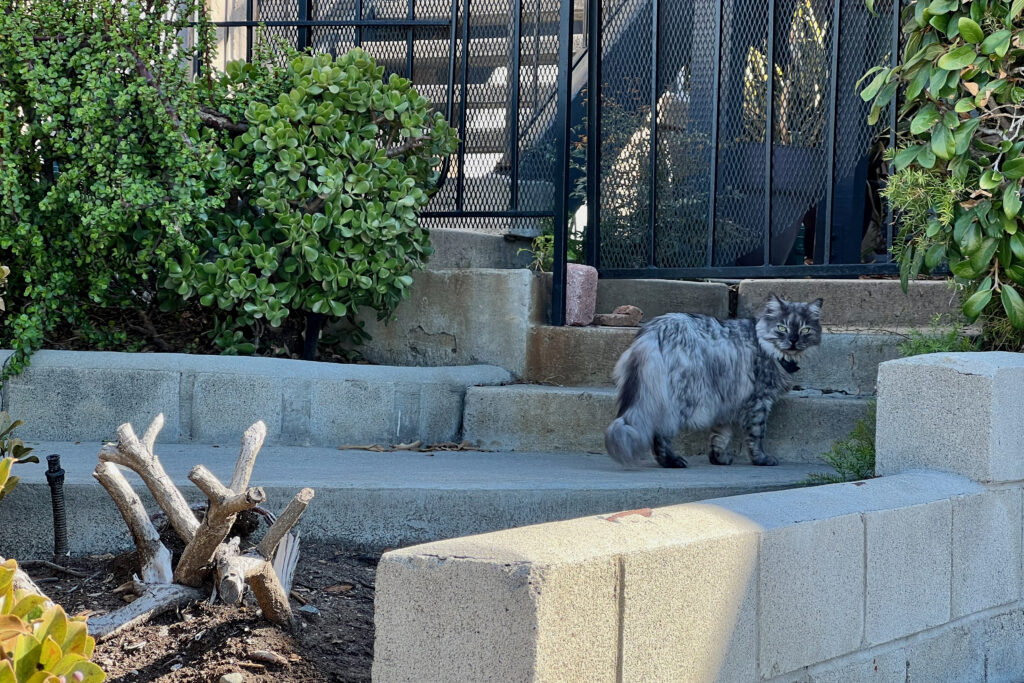 On this date five years ago, the series started with a kitty nicknamed Scruffy—seen once and never again. A few months earlier, surgery in both eyes recovered my vision, remarkably also making it better than anytime earlier my life. Adjusting to a new way of seeing and also wanting to improve my photography skills, I chose cats as objects for my camera (and smartphone).

But I expected the project to be short-lived. As stated on Oct. 17, 2016: “I begin a new series that ends when the photos are all used”, thinking something like 30 days at most, given the pics already taken and the few additional to follow—because in a community dominated by dogs surely few cats could be found. Obviously, I was gravely mistaken; happily, if you prefer.

Our anniversary feline is the seventy-sixth from Alabama between boundaries Adams and Lincoln. Why so many is a mystery to me; I roam the entire neighborhood and give the street no special conveyance. My wife and I saw this magnificent Maine Coon (blend, possibly) while walking home from Smart and Final on Oct. 14, 2021. The longhair moved among shrubs and steps to an apartment complex gate, behind which I could hear another animal meowing. My prowling about with iPhone 13 Pro proved to be too much disturbance and she (or he) retreated into an adjacent property.

The fluffer appeared to wear a GPS collar, although I am uncertain; Annie had the same impression. For presumably being a traveler, or wanderer, the furball earns nickname Gypsy. Featured Image vitals: f/2.8, ISO 32, 1/122 sec, 77mm; 10:20 a.m. PDT.